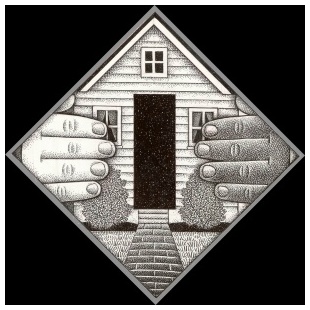 Planning efforts of the mid- to late 19th century were grounded on a belief that the public interest would best be served by the exclusion of undesirable land uses, usually commercial and industrial uses, from residential areas.

By the early 20th century, newly adopted land use zoning controls expanded on the exclusionary nature of community planning by not only physically separating industrial, commercial, and residential zones, but also by distinguishing between single-family and multi-family residential zones. This had the effect of excluding many middle-to lower-income persons -– primarily renters –- from increasingly large swaths of land which (especially by the 1920s) were being designated as single-family districts. With multi-family zones limited to already built up and often deteriorated older neighborhoods, the less well-to-do were locked into the city core.

Many municipalities “refined” their exclusionary zoning practices in the mid-20th century by creating a series of single-family-only zones of increasing minimum property size, ranging from 5,000 square feet or less to 40,000 square feet or more. Since land price is a major contributor to housing affordability, this practice resulted in concentric bands of increasing exclusion, with low and moderate income citizens unable to afford homes in lower-density perimeter residential areas. Editor’s note: for more detail on this, see Gerckens’ PCJ article, “Single-Family-Only Zones” (Summer 1996).

A number of communities took income-based zoning even further by totally excluding all but single-family homes or by prohibiting manufactured housing units (“mobile homes”). By the 1970s, state courts across the nation, with rare exception, held such actions to be unconstitutional.

The 1970s also saw the emergence of a movement toward regional inclusionary housing. The Miami Valley Regional Planning Commission in Dayton, Ohio, adopted the first “fair-share” housing plan in the nation in 1970. This plan allocated affordable housing over a five-county area, with the goal of providing low- and moderate-income families with housing opportunities not just in the city of Dayton, but in all thirty-one surrounding municipalities and townships.

The focal point of the inclusionary housing movement, however, was New Jersey. In 1975, the New Jersey Supreme Court issued its landmark ruling in the case of Southern Burlington County NAACP v. Township of Mount Laurel (commonly referred to as Mt. Laurel I). The Court held that every developing community (one not already totally “built out”) had a constitutional obligation to provide its fair-share of its region’s affordable housing needs. Any use of the local zoning power that did not fulfill such an inclusionary requirement was unconstitutional.

Eight years later, the New Jersey Supreme Court expanded on its Mount Laurel I ruling by setting out guidelines and procedures for how “fair-share” obligations were to be met. This Mount Laurel II ruling led to the State Legislature’s passage of the Fair Housing Act of 1985, which created a Council on Affordable Housing (COAH). Municipal plans had to include housing elements and fair-share plans. COAH, in turn, would certify the local housing plan’s consistency with criteria designed to “make the achievement of the municipality’s fair-share of low and moderate income housing realistically possible.” Editor’s note: for an overview of the Mt. Laurel rulings (Wikipedia). 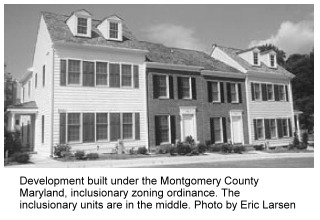 A growing number of cities and counties have adopted “inclusionary zoning ordinances” requiring developers to include a percentage of affordable housing units as part of new developments. A variety of other inclusionary techniques have also been used. “Linkage fee” programs, for example, link the approval of new commercial or office development with a requirement that the developer provide affordable housing units, or in-lieu fees. The goal is to provide housing opportunities for workers who would otherwise be unable to afford to live in the community.

Inclusionary development policies, by considering the impact of public actions on housing availability for all citizens of the community and region, have resulted in significant progress toward the realization of a just society.