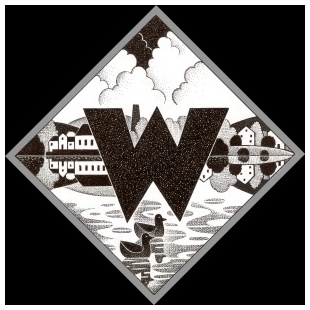 Prior to the 1750s, water was provided to residences in America by onsite wells or by water sellers who went door-to-door delivering water from nearby rivers or springs.

Although Bethlehem, Pennsylvania can lay claim to the first pumped and piped water system in America (1754), it was not until 1801 that Philadelphia completed the first major community-wide waterworks. 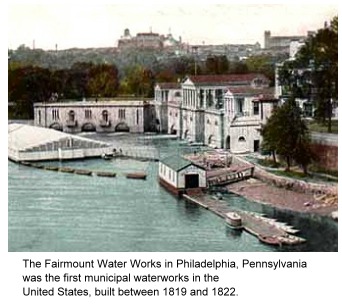 Philadelphia constructed its system largely in response to devastating epidemics in 1793 and 1798. In fact, epidemics (coupled with the need to control fires in dense urban centers), precipitated the development of many municipal water systems.

Until the 19th century, individual residential cesspools and the pail system for removal of waste from privy pits were the predominant means for waste collection and removal. The introduction of the water closet and piped water supply resulted in overflowing private cesspools. This motivated construction of community-wide collection systems to carry away sewage to rivers and streams. Unfortunately, this remedy often shifted the pollutants to the water intakes of communities downstream.

Solutions emerged in the development of filtration systems. The first slow sand filters for sewage were initiated in Poughkeepsie, New York in 1870. The next step forward, the intermittent filtration of sewage on sand beds (permitting air to enter initiating biological action and producing a clear and odorless effluent), was first used in a municipal system in Reading, Pennsylvania in 1908. By World War I, most of the largest cities in America had water filtration systems, chemical water treatment facilities, and sewage filtration plants. Nevertheless, until 1940 more than half of America’s communities failed to treat their sewage in any way before dumping it into a river or stream. 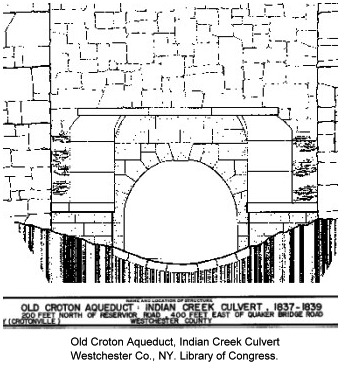 Cities sought water sources often a considerable distance away. Between 1905 and 1914 New York City built huge reservoirs in the Catskill Mountains, some 100 miles to the north. Around the same time, Los Angeles undertook the enormous Owens Valley Project, carrying water through a 240-mile aqueduct. The Owens Valley project also reflected the truism that whoever controls the water supply of a region controls its potential for growth.

Since most early city centers were located along waterways, flooding was a regular threat. Large-scale regional flood prevention served as a primary motivation for regional planning in America. See R is for Regional Planning. At the local level, many modern subdivision control ordinances include requirements for the retention and slow release of storm waters in new developments. This has minimized flood damage to neighboring and downstream properties.

Federal and state clean water laws have helped ensure the supply of clean and safe drinking water. One way has been through the protection and preservation of wetlands and aquifer recharge areas, an approach that has also provided valuable refuges for migrating waterfowl.