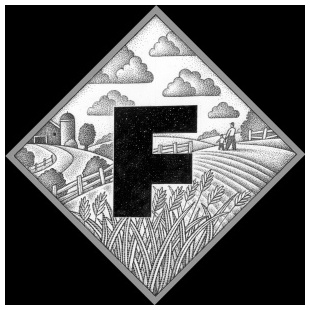 Maintaining productive agricultural soils has been the basis for the economic and cultural growth of most nation states. In America, however, farmland preservation efforts have gained momentum only fairly recently. For years, the accepted practice was to show agricultural fields and woodlands on land use maps as “white — undeveloped.” The plain message was that these properties were blank slates waiting to be filled with higher and better uses.

Another significant cause of the loss of farmland has been our property tax system, which views farmland in close proximity to new residential and commercial development as the natural extension of the expanding city. It assigns a speculative future value to those sites — and then taxes that speculative increase before it is realized. This tax burden falls on the farm owner. As a result, farmers are often driven to sell their land to speculators.

The all-too-common result has been that as metropolitan centers expand, they not only chew away the farmland, but surround and destroy the life of small farm villages in their regional hinterland. 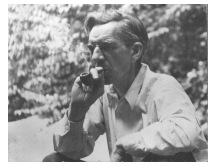 As regional planning pioneer Benton MacKaye showed as far back as the 1920s, this does not have to be the case. Through effective regional planning, this smothering suburban development can be directed to the spaces beyond and between existing rural villages, maintaining their economy and character.

While farmland is still being lost at too rapid a pace in most metropolitan areas, agricultural land preservation is increasingly being recognized as a major component of state, regional, and local planning policy. Among the techniques planners are using to preserve farmland:

Large-lot zoning. Where the urban center is still remote, where farms are still large, where the land is superior in its productivity, where there is consensus in support of maintaining the rural life style (and where state law permits), land can be zoned for agriculture use, with subdivision limited through the use of large minimum lot sizes (sometimes, 160 acres or more).

Urban service limits. The path of future development can be redirected, relocating the pressure to develop to areas less destructive of farm life. This can be done by limiting the prime growth-supporting facilities, such as road access and utilities, to other areas. Lexington, Kentucky, used this device as long ago as 1958 to direct city expansion away from the famous “blue grass” horse farms. An urban service limit was established that denied improved roads, utilities, and other services to areas near the horse farms, but assured them in other sectors. Editor’s note: see Beth Humstone’s PCJ article, “Building Invisible Walls: Urban Growth Boundaries” (Winter 2011). 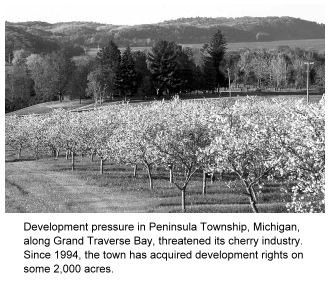 Transfer of development rights (TDRs). In this approach, farm land is zoned for very low density development, but farm owners can transfer (and receive payment for) valuable development rights to their property. These development rights, in turn, are acquired by landowners in other parts of the jurisdiction. This permits the farmer to reap the benefits of land speculation and still continue farming on land now taxed only on its value for agriculture. The most widespread use of TDRs has been in Montgomery County, Maryland, and the New Jersey Pinelands. Editor’s note: see Rick Pruetz’s PCJ article, “Putting Growth in its Place with Transfer of Development Rights” (Summer 1998)