These 26 short articles provide — in alphabetical order — a terrific introduction to planning in America. They were prepared for the Planning Commissioners Journal by the late planning historian Laurence C. Gerckens, FAICP. Gerckens was national historian for the American Institute of Certified Planners; founder of The Society for American City and Regional Planning History; and emeritus professor at The Ohio State University.

Paul Hoffman, who illustrated all 86 covers of the Planning Commissioners Journal, prepared the 26 illustrations for the Planning ABC’s.

Sit back, relax, and browse through a range of fascinating planning topics. 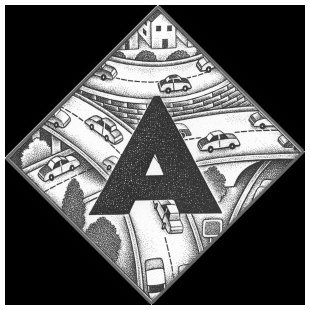 The automobile enabled creation of multi-million-person urban areas spread thinly over vast regional areas — and shaped the character of the 20th century American city. The primary city-shaper until the mid-1920s was the trolley. Electric trolleys, running on fixed-rails, generated high density residential development within a few-block walking distance of the main streets on which they ran. Small mom-and-pop grocery stores and personal service shops were located at street corner trolley stops regularly spaced along the major streets radiating outward from the central commercial and manufacturing district: the “downtown.”

The advent of the automobile changed all that. Not limited to fixed main-street routes, the automobile could travel anywhere there was a passable public way. The auto-owning seeker of a housing site could negotiate for a parcel of land beyond the limits of a few major streets. This dispersal of new residential development (generally for a population with higher disposable income than that of the average dweller along a trolley line) led, in turn, to strip-commercial development along auto routes radiating outward from the city center.

By the 1920s, the need for street-widening to relieve auto congestion in and near the city center was already triggering large and growing public expenditures. This required careful budgeting of community resources — and stimulated the formal adoption of capital budgets and the preparation of long-range community plans for physical development. See B is for Budget and C is for Comprehensive Plan.

Auto-accessed commercial and industrial developments beyond downtown made for increased demands on city services. Zoning was used to limit such developments to specific areas. This served not only to conserve community tax resources, but to assure the owners of single-family-detached homes in the newly emerging “suburbs” that the value of their property would not be threatened by the intrusion of undesired neighbors.

Unfortunately, one outcome was that American families became increasingly dependent on the automobile. This auto-dependency was heightened by curtailment of suburban transit service in many communities. Reliance on the private auto generated the ubiquitous multi-car family as the varying transportation needs of family members required travel over long distances, at diverse times, and to widely scattered locations.

More cars, in turn, led to a dramatic change in the layout of residential developments as wider streets were provided to permit parking on both sides; wider lots to allow single-story houses with two-car garages to face on the street; and deeper front yard setbacks to enable on-site parking of two or more automobiles. The resulting increase in lot size — coupled with a reduction in family size — endangered the walk-in-school and the concept of an elementary-school-focused neighborhood. And for those on the lower rungs of the economic ladder, locked into central cities, the new auto-based suburbs meant reduced job and life opportunities.