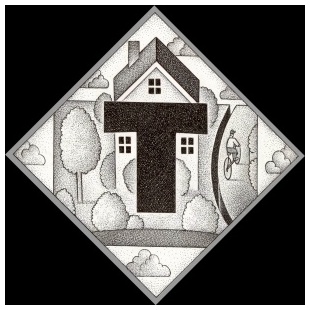 No person shall be … deprived of life, liberty, or property, without due process of law; nor shall private property be taken for public use without just compensation.”
— The Constitution of the United States, Amendments, Article V

State and local governments have long been empowered to acquire private property for public purposes so long as compensation is paid. However, in the 1920s, cities and towns began using land subdivision controls to require the “dedication” (giving) of streets to the public — without compensation — when land was subdivided.

Courts uniformly found no “taking” requiring compensation in such situations. They pointed out that there was no public coercion since it was the landowner who initiated the request to subdivide. They also stressed that the dedication involved only a portion of a landowner’s property and did not deprive the owner of substantially all its value. This rationale was followed in the 1930s to uphold subdivision requirements for the dedication of parkland.

The courts also upheld a broad array of land use regulations designed to protect public health and safety. While these regulations did not involve the direct public use of private property, they did have significant impacts by limiting the extent and density of development — and precluding potentially more lucrative land uses. Among the early restrictions upheld by the Supreme Court: building height limits; bans on locating certain uses in or near residential areas; and building setback lines. Most notably, the Court upheld comprehensive zoning — laying the way for the explosive growth in local zoning across the country. Euclid v. Ambler (1926). 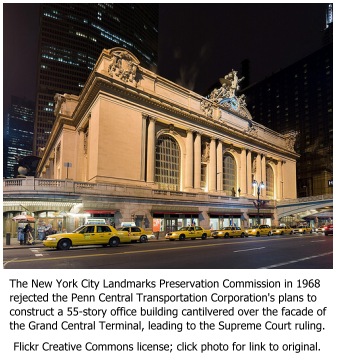 After more than four decades of silence, the Supreme Court returned to the land use arena in 1978. At issue was New York City’s historic designation of Grand Central Terminal, which prevented Penn Central from constructing an office tower over the Terminal. The Court held there was no “taking,” as Penn Central could earn a reasonable return on the existing Terminal, and from development rights the city made transferable to nearby sites. Penn Central Transportation Co. v. New York City (1978).

However, the Supreme Court has held that a moratorium on development pending completion of a long-range plan does not necessarily result in a taking, especially if the moratorium is of limited duration. Tahoe Sierra Preservation Council v. Tahoe Regional Planning Agency, 2002.

In the past decade, efforts (mostly unsuccessful) have been made in state legislatures and in Congress to define a “taking” as any public action that reduces property value beyond a specified low percentage, and to require payment by the public for “lost” value above this level. The potential impact of such legislation on the ability of governments to regulate land use is enormous.