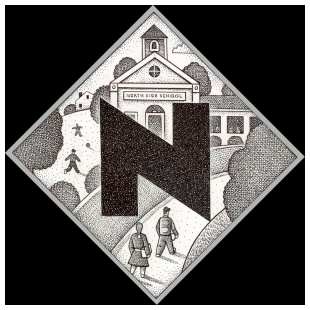 To community planners, the term “neighborhood” draws on ideas propounded in England by Ebenezer Howard at the end of the 19th century. Howard postulated a community of six interlinked neighborhoods (or “wards”) of about 5,000 people each, focused on an elementary school, bounded by major streets, and containing a variety of residential accommodations. Industry was located at the perimeter of the community. Commerce was focused on the community center, a few block walk from each neighborhood.

In Howard’s Garden City concept, communities were not permitted to grow beyond these limits. Each Garden City was to be bounded by a publicly owned greenbelt of agricultural land that could not be built upon. When population growth required additional accommodations, a new Garden City would be built.

The major American adaptation of the British neighborhood idea, however, was rooted in the one-mile square land “section” system of the Midwest. Neighborhoods were based on quarter-sections (160 acres), with major streets bounding neighborhoods one-half mile apart, and no through traffic. Residential densities generated by apartment and row house units resulted in a sufficient school-child-age population to support an elementary school within a quarter-mile walking distance from home. However, as early as the 1920s, emphasis on lower density single-family detached housing began to require an increase in the size of the neighborhood to assure sufficient population to support the walk-in school. By the late 1940s, advocates of the “neighborhood unit” were promoting neighborhoods one mile square (equal to 640 acres, a full section), with a half-mile walk to school, and major streets one mile apart on section lines.

Neighborhoods took on a new role in the 1950s and the 1960s in many cities, as neighborhood based groups led the opposition to the large-scale demolitions and dislocations resulting from redevelopment, housing projects, and in-city highway construction. Organized neighborhood associations gave residents a voice in the political process. Many cities officially delineated neighborhood districts, giving them a more official and on-going role in the community development process. With this often came assistance from city planners and other staff.

The coming of the birth control pill in 1960 and declining family size, in combination with continuing increases in the lot size of single-family dwellings, led to significantly lower “school-age-population-per-acre.” By the 1980s, this had made the walk-in elementary school unfeasible in most neighborhoods. As a result, little was left of the neighborhood unit idea except the definition of residential districts by bounding major streets. Yet at the very point at which the neighborhood concept seemed at its nadir, two related movements, “The New Urbanism” and “Smart Growth,” breathed new life into it by advocating denser, more diverse residential areas, with a mix of local retail shops and services, and a halt to low-density perimeter sprawl.