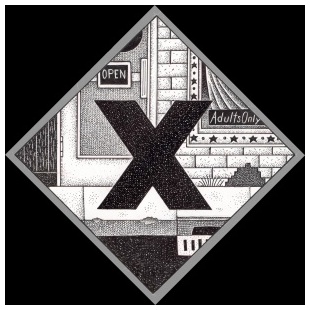 There are a number of land uses that, although legal, are almost universally considered to be poor neighbors. These include sex-related businesses (such as “adult” book stores, “exotic” dance studios, and “strip tease” theaters), as well as uses ranging from sewage treatment plants and garbage dumps to feed lots and poultry farms. In recent years the acronym “LULUs” has caught on to describe these “Locally Unwanted Land Uses.”

Local governments have been especially active in combating sex businesses. While the U.S. Supreme Court has held that sex businesses, such as adult book stores, cannot be totally excluded from a community, the Court has left municipalities free to tightly regulate their location. Most communities have responded by providing a limited number of zoning districts within which adult businesses can be sited (though almost always as conditional uses).

Adult businesses are invariably prohibited from locating within specified distances of schools, churches, parks, and other places of public assembly. In addition, zoning ordinances often include conditions such as screening the use and its parking facility from view from surrounding properties and public thoroughfares.

Early American land use controls often focused on what might be considered the “X-rated” land uses of their day: fat trying plants, tar boiling facilities, dead animal disposal lots, slaughter houses, garbage dumps, and industrial production facilities. The principal issue was the location of these uses in relation to residential areas and places of public congregation. The most common local government response was to isolate all such uses, allowing them only in limited geographic areas, identified as “industrial” zones.

Interestingly, however, early 20th century as “model” zoning ordinances did not prohibit offices, retail sales, or even residential uses, from locating within industrial zones. The justification for this, in theory, was that if the owners and occupants didn’t mind having “X-rated” uses for neighbors, they should not be barred from locating in such zones. As the 20th century wore on, however, zoning codes increasingly came to prohibit business and residence uses in industrial zones.

In lieu of zoned isolation, protection from the negative effects of such uses can be accomplished through use of “performance” controls (or standards). Such controls involve setting measurable maximum standards for perimeter impacts, such as light, sound, smell, sight, vibration, and traffic. Many uses now allowed only in industrial zones have virtually no negative impacts on surrounding uses (or have impacts that could well be addressed through good site design and buffers). Yet most communities still adhere to the principle of zoned isolation formulated almost a century ago. 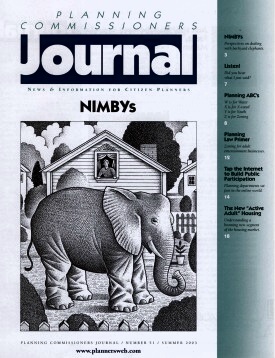 Public discussion of where LULUs are to be located inevitably brings out hordes of NIMBYs espousing “Not In My Back Yard!” Yet, many of the uses generating NIMBY opposition are essential to the community. These include garbage and trash disposal, as well as sewage treatment facilities. NIMBYism is most commonly followed by PIOTism, “Put It Over There” (in HIS yard), the “there” commonly being in other communities or in or near lower-income neighborhoods.

Some have suggested (undoubtedly as a hypothetical fantasy!) that if each residential neighborhood had to treat and dispose its own waste within its own geographic confines, we would very quickly have effective recycling and resource conservation programs.

Editor’s note: See these articles, for more on dealing with NIMBYs.