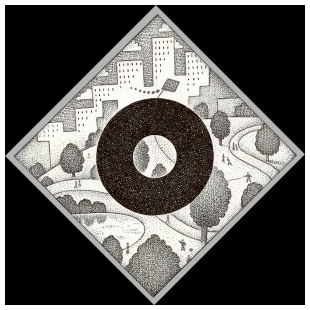 In the early 1850s, New York City’s gridiron street system was continuing its northward expansion up Manhattan Island, unrelieved by open space reservations. Only two relatively small open spaces, Union Square and Washington Square, served Manhattan — at a time when urban residential densities were becoming acute due to arrival of the first of many massive waves of European immigrants.

Based on a state authorization in 1856, a large area centered east/west on Manhattan Island and located beyond the northern edge of development was purchased to provide a great public “Central Park.”

The plan for the park, by Frederick Law Olmsted, Sr., and Calvert Vaux, designated the park as a “greensward,” a district of the city intended to remain perpetually rural. In creating this planned reserve, the first large scale “natural” park in America, Olmsted and Vaux provided the model for hundreds of city parks to follow. The success of these parks also led to the creation of public park systems and their administrative park boards, board which laid the foundation for future city planning boards.

Recognizing that the great city parks were far removed from the residences of large numbers of the urban poor, noted housing reform advocate Jacob Riis promoted construction of small parks and playgrounds in New York City’s tenement districts. Poverty Gap playground, built in 1889, was located in a gap in the wall of urban tenements created by demolition of deteriorated structures. Small city parks, such as Mulberry Bend, offered open space to residents of the city’s poorest, most densely populated areas.

Acquisition of parkland at a regional scale was at the heart of landscape architect George Kessler’s landmark 1893 plan for Kansas City, Missouri, and environs. The plan identified geographically significant sites, including wooded glens and hilltop overlooks, and proposed connecting them with “paseos” running far into the countryside, providing wide lineal parks and greenway boulevards to serve future neighborhoods that would be developed as the city expanded. One of Kessler’s insights was to recommend that future parkland be purchased while it was still relatively inexpensive agricultural lands and woods. The long-term “payoff” of this well-planned park system was (and remains) enormous, leading to Kansas City’s reputation as “the city of parks and fountains.”

Open spaces include not only parks, but also street spaces. The primary spatial experience of many communities is that gained by proceeding down broad tree-lined boulevards, punctuated by arrival at circles, squares, or plazas. With the advent of zoning controls in the early twentieth century, generous front and side yard setback requirements along such roadways helped maintain the spaciousness of this often-overlooked urban open space. 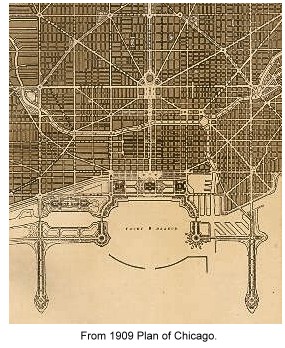 One of the most noteworthy, and long-standing, large-scale open space planning efforts has involved Chicago’s lakeshore. Commencing with the dedication of lakeshore properties to public use in the 1830s, reinforced by the preservation efforts of Aaron Montgomery Ward in the 1890s, and a focal point of the noted Chicago Plan of 1909, enhancement of the lakeshore remains a vital part of Chicago planning to this day.

As in Kansas City, the benefits have been huge. City residents and visitors have been able to enjoy a priceless amenity, while the open space has served to create billions of dollars in real estate value within the city and region.