In today’s installment, Della Rucker considers the use of linear extrapolations — and why that’s not the best way for communities to plan for the future.

I have two sons, and when the younger one was 9, I wrote this about him (I have to put in that caveat because now he’s 11 and actually outgrew at least this part of his life’s disorganization. More on him later). 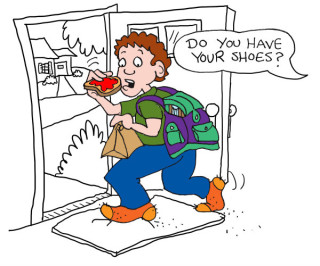 Every weekday morning he goes to school. To go to school, he has to put on his shoes. How often during a week do you think he does that without my telling him to find his shoes before he misses the bus? How often do you think he says to himself, “OK, bus time in five minutes, I’d better go get my shoes.”

The answer is: not often. He’s not thinking ahead, and if he waits until the last second and can’t find his shoes, he has a problem. If he thought ahead past the second he is living in, he would save himself (and Mom) a lot of aggravation.

For my son, considering the possibility that his shoes might not be where he thinks they are would (I hope) change his behavior — he would leave himself a little bit more time to find them in case they are in his room instead of by the door. He would anticipate other possibilities than the one that’s supposed to happen. That wouldn’t mean that he would have to account for every remotely conceivable possibility — the chance that an alligator breaks into our house in Ohio and eats his shoes is about .0001%, so it wouldn’t make sense for him to build an alligator trap in the hydrangeas to make sure that he can get his shoes on.

We often fail to think ahead about the choices we make as communities. If we build that new road, or stick all our money in that grant, or allow that neighborhood to deteriorate, what do we think will happen?

What we usually do when we try to figure out the future: we create a linear extrapolation. We look at where we are and where we’ve been, and we draw a straight line through those points, charging out into the future, straight as an arrow. Something like this –>

There are two fundamentals at work here:

We might look at a bunch of factors, we might create a variety of extrapolations, but we usually average that variety out. And we end up with one straight or neatly arcing line.

That’s great, because it gives us a nice, easy, concrete, manageable future. We will need 3,424 additional housing units, we will be able to support 150,000 additional square feet of retail space, we will see an increase in traffic on Road X of 350%, which obviously means we have to build a new road or make a superhighway out of that thing. Isn’t that good to know?

Interestingly, the most successful businesses don’t use straight linear extrapolations the way we do in planning and economic development anymore.

Interestingly, the most successful businesses don’t use straight linear extrapolations the way we do in planning and economic development anymore – they outgrew that somewhere in the last 15 years. Instead, the current state of the art is to identify multiple potential future situations, and then plan for the key drivers of and prevailing needs created by those future situations. So instead of the simple straight line, you get something more like this:

The dots represent different future situations, and the arrows represent the most likely future possibilities. Not quite as simple, but a lot more insightful if we want to create strategies that will help us find success in a future that we have to honestly admit that we cannot predict.

If, as communities, we thought through the potential impacts of the choices we made in the past, we would have probably anticipated at least some of the issues that we face in local economies today.

We might have anticipated that demolishing urban neighborhoods to build highways could destabilize entire populations, and we might have guessed that new building upstream might result in increased flooding downstream. We probably couldn’t have predicted everything, but we could have probably headed off a few of them.

Instead, we have largely noted these impacts with surprise after they occur.

We might have had an excuse for being overly simplistic in the mid-20th century, when many of our tools and ideas for where we lived and how we got around were new and we were more naïve about what might happen. But we don’t have that excuse anymore.

If a simple straight-line prediction of items such as population growth, market demand, or traffic generation ever made any sense, they certainly don’t now.

Instead of thinking of the future as a straight line that takes our current trends and projects them growing predictably into the future, we have to start thinking about multiple potential futures. We need to evaluate what happens if the projections come in much lower, or much higher, than current trends would indicate. If we miss the mark too broadly, we may not have the resources to deal with the impacts of our mistakes.

A wise approach to evaluating future likelihoods would look at the range of possible trajectories, select a manageable number that seem most likely, and design the plan to address those. And of course, revise the assumptions frequently.

One more point: when I talk about anticipating consequences, I don’t mean the ipso-facto type of confidence we often get from engineers: “it fits the standards, therefore it will do X because the manual says it does.” The 20th century gave us a bumper crop of excellently-engineered projects that left us with consequences that the engineers didn’t envision — the unintended consequences of decisions that made perfect sense within the strict confines of the manuals.

Our communities are littered with enough of those projects and their consequences. We have no excuse to pretend that following the manual and believing the ipso-facto will help us build the communities that we need.

Editor’s Note: The following is excerpted from Professor Laurence Gerckens’ Planning Commissioners Journal article “K is for Knowledge.” They struck me as particularly apt given what Della Rucker just discussed.

“What might be termed the “classic” planning process, as developed in the early decades of the 20th century, followed three sequential steps: (1) data gathering; (2) plan making; and (3) plan implementation. …

This “classic” planning approach, however, was critically flawed in two ways. First, since data gathering preceded the consideration of plan policies, it was impossible to gather all of the information that might possibly be needed in the evaluation of an unknown number of policies, options, and elements that might be developed at a later date. …

The second “flaw” –- or built in bias -– in the “classic” planning process lay in the fact that it was premised on the projection or continuation of past trends. In other words, past trends became the policy-bases for the comprehensive plan. As a result, plans rarely reflected any vision for positive change. Instead, they reinforced historic patterns.

Unfortunately, this meant that local plans rarely addressed past inadequacies and injustices. Using the terminology of modern environmental impact review, plans were based on the “no-change” scenario.

By the end of the 20th century, this older “classic” planning process had been replaced in many communities with a far different approach. “Modern” planning processes began not with the acquisition of immense amounts of data, but with the creative visioning of alternative futures -– establishing community goals, alternative patterns of development, and the means of their attainment. With potential alternatives set out, the acquisition of data could be more limited, focusing on just that information needed to test these specific ideas. As a result, more time, money, and attention could be addressed to the goals of planning and plan implementation.”