None of us want to live in a world where the basic assumptions that we framed our lives and work around are changing. … But in our guts, I think we all know: our economies and our communities are different now.

None of us want to live in a world where the basic assumptions that we framed our lives and work around are changing. Methods that used to do what we wanted just fine stop working, assumptions we used to be able to rely on don’t apply any more, our carefully-guarded proverbial apple carts end up dumped all over the ground.

No wonder we often want to just stick our fingers in our ears and insist that everything’s fine, we just need to wait ‘til the good old days come back.

But in our guts, I think we all know: our economies and our communities are different now. When whatever good times come back if they come back, they’re probably not going to look like what we have today.

And frankly, that sucks. And it especially sucks if you have responsibility for your community’s economic health — whether you’re a professional economic development or public administrator, an elected official, a board member or just one of those people who give a damn about the future of the place where you live.

It would be awful nice if the programs and incentives and tools and tricks we’ve been using since the 2000s, or the 1990s, or the 1980s or earlier, still worked. After all, we know what they are, we know what they do. We like being able to point at simple success stories, cut ribbons, make the Mayor happy. And that stuff makes our local economy better, right? Isn’t that what we’re all about?

But what about when it doesn’t?

What about when it’s not?

This book is about helping all of us who care about our local economies recognize what’s changed and help us make a difference.

That’s scary, and yes, sometimes it sucks. We’ll try to deal with that.

At the end of the day, though, I don’t think we have a choice. As I’ll tell you in the next section, I’ve spent almost all of my life in the opening rounds of this change. It’s affected pretty much everything I’ve encountered, both personally and professionally. I think it’s past time to take the scales off of our eyes, own up soberly to the way the world has changed and is changing, and get on with the job of the Economic Development Revolution.

The good thing is that people are starting to do that — people all over the country and all over the world. You’ll meet some of them here. But we need more, a lot more.

So I hope you’ll join us and grab that change by the horns. Perhaps more importantly, I hope that by the time you finish reading this thing, you’ll know that this deep change is possible. And that you can help.

This book isn’t a how-to manual. It’s more a collection of related essays than anything step-by-step.

That’s because the world is still writing the how-to-manual. We’re still figuring it out. But in order to figure it out, we need to understand what we are facing, what has changed and how we need to be shifting our base assumptions so that we can each contribute a couple of paragraphs to the new economy’s how-to manual.

What I wanted in writing The Local Economy Revolution:

Something that gave you something worthwhile to think about in the shower or while walking the dog.  Something that sparked meaningful conversations with your colleagues and friends.

Something that taps that place in your guts where the reason why you got in to this still lives.

Something you can read because you want to.

That said, this is not a book for everyone. But it is a book for a lot of different ones.

If you are a staffer for a local or regional government, whether it’s a rural town or a metro transportation agency, this book should give you some thinking tools. I hope it will allow you to look up from the fires you have to put out every day and the messes that seem to pile up on every side. I hope it will give you some tools to help you more productively reframe the big issues that are impacting your work and giving you those ulcers, and I hope it will give you some encouragement to make your difference in the face of the tough decisions and the seemingly no-win choices you increasingly face.

If you’re an elected official or serving on a commission or board, I hope this will give you some new answers to some of your hardest questions – like, “Why isn’t our economy getting better?” You’ll discover that the answers are probably less simple, and have more moving parts, than you might have expected. And you’ll also discover that you have a powerful role to play — and a wicked, but worthwhile, challenge ahead.

If you’re a volunteer, an advocate, one of your community’s People Who Give A Damn, you will probably discover that you have the most important role of all.

What this book is asking your community staffers and elected officials to do is to throw out many of the assumptions and methods they’ve been defaulting to for 30 years. They may know in their guts that this isn’t working, but they’re in a frightening situation. They are creatures of your government and your community, after all. If they advocate for deep change, and you’re not clearly in their corner, I promise you that those who are benefitting from the current system, and those who don’t see the need for change …

Will give those folks a sound beating.

They need you to advocate, to agitate, to raise pressure for a new way of making our communities better. So stand with them. Speak in support of them. Please.

Profound cultural change has never come from policies and legal opinions. It doesn’t come from government staff or elected officials.

If you want to change your community’s future, it has to start with you.

If you want to change your community’s future, it has to start with you. I hope this book will give you a framework, and some examples to indicate that this kind of deep change is possible. And maybe it will give you something that you can share with your electeds and appointeds and executive directors and the like, to help you say what you want to say.

But this book alone won’t make that happen. If you don’t advocate for this change, my voice is a violin in the void. As I’ll say later, a violin in a void can have power. But we need a lot more of them to fill the gaping space in front of us.

If I’m going to bombard you with the challenges and opportunities ahead of us, maybe I’d better give you some idea where I’m coming from.

If I’m going to bombard you with the challenges and opportunities ahead of us, maybe I’d better give you some idea where I’m coming from. As I’ll say somewhere later on, making wise decisions depends a lot on understanding the limits of the information you’re working with. Might as well start by applying that to me.

I’m about as much a product of the Rust Belt as anyone you’ll meet. I grew up in a small town outside of Cleveland, Ohio, where my father and grandfather ran a small paint factory. The factory was a sort of jack-of-all-trades type establishment, making everything from primers to spray paints for wholesalers and retailers. In the pre-rusting Rust Belt, there was a lot of metal to protect, so the paint-making business kept about eight people, including my dad and grandfather, pretty busy.

Until about 1981. As a result of being where I was when I was, I got a front row seat for the first convulsions of the collapse of the traditional manufacturing economy. The collapse that’s still playing out today.

By the time I was in middle school, several of the company’s customers had gone out of business, and the market for a jack-of-all-trades paint manufacturer had collapsed. The company was sold for its assets (the only value left). My father was out of work for most of three years.

Thankfully, I had good encouragement in high school, and I was able to go a very good college. I ended up with an undergraduate degree from Northwestern University in Chicago and, about 10 years later, a Masters in Community Planning from the University of Cincinnati. So for the most part, I came out OK.

But I don’t think my father ever got over those years. Unemployment isn’t just a statistic in some government report — it’s a life profoundly dislocated. You can’t always control that, but do try not to forget that. OK? Thanks.

I have had three or four careers, depending on how you want to count. I sometimes joke that my career path looks like cooked spaghetti.

I started out as a small town journalist, and then became an English teacher, which gave me a skill set for managing and guiding groups of people to find answers and meaning for themselves. It did not, however, give me much in the way of job prospects, since I came out of college in a place and time where there were five times more teachers than anyone needed. 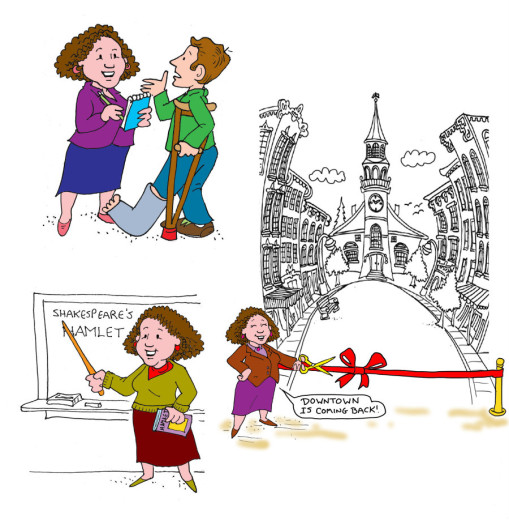 Whoever said God has a sense of humor apparently had a hand in my resume.

As I tried to figure out my next act, I ended up with a consulting business that focused on historic preservation and downtown revitalization. Through a typically convoluted process, that morphed into community planning, which morphed into economic development planning and swung back around to include community revitalization, public engagement and a little journalism. Whoever said God has a sense of humor apparently had a hand in my resume.

At some point in the book, I will end up touching on all of those — and also on parenthood, a constant source of delight, frustration and total chaos. My personal narrative will also bounce geographically — Cleveland, yes, but also Cincinnati, where I live today, and Green Bay, Wisconsin, where I spent most of the 1990s. And assorted client locations, an occupational hazard when you’ve spent most of your adult life consulting with local governments.

Enough. Let’s get on with it.

It wasn’t until I started putting this book together that I realized how much George Gott influenced my thinking, my work, actually pretty much everything. He would have never expected that. I assume that, somewhere in the universe, he knows that now.

Della Rucker, AICP, CEcD, is the Principal of Wise Economy Workshop, a consulting firm that assists local governments and nonprofit organizations with the information and processes for making wise planning and economic development decisions. She is also Managing Editor of EngagingCities.

Rucker’s columns for the Planning Commissioners Journal and PlannersWeb have focused on planning and economic development — and on creative ways of actively involving citizens in the local planning process.