See the previous section of The Local Economy Revolution: Sell Saturns, Not Clunkers.

Today, Della discusses why when it comes to economic development, there may be value in placing little bets.

Check out this examination from Anna Famery, of The Engaging Brand, one of the leading thinkers about emerging issues in business and marketing in the UK:

[I]n the digital economy I wonder if as an entrepreneur or business leader should we change our concept of corporate culture? 1

When the digital age is moving so quickly and consumers are gaining power, maybe the future trend will be towards a disposable company — it launches, it delivers, it morphs into something else or disappears?

In my lifetime I have seen clothes, TV’s, phone’s etc. come to a price point that makes them almost disposable if you want them to be …

So why not a company?

When the digital age is combined with slow economic growth … the hockey stick financial plans [picture a graph that shows slow growth followed by a sharp increase at some point in the future] look redundant. Imagine the hockey stick becoming a 2-3 year project? Imagine such a lean, decentralized company that it can move quickly, fold and then come back as something fresh that embraces the new technology?

Maybe, just maybe, we should be focused not on growing structure but on growing flexibility?

From my own notes: 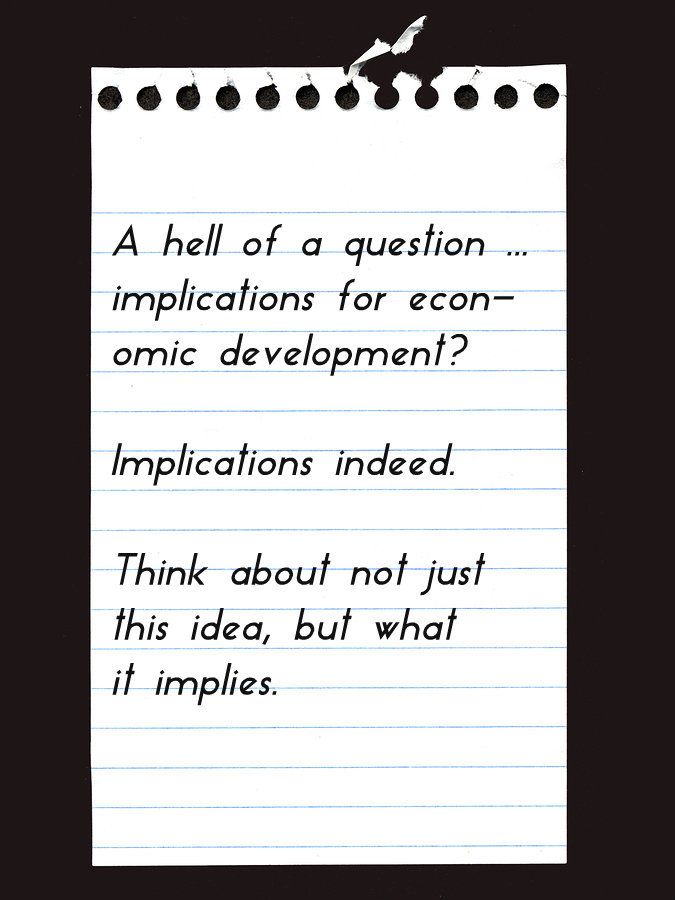 We know that employment for many people looks nothing like it looked for my father and my grandfather — so different that even a session at the International Economic Development Council’s Leadership Conference can question whether the concept of a “job” still exists. The magazine Fast Company has described a Generation Flux where the most successful careers zigzag across business types. High school students are advised that they may very well spend their careers in industries that don’t exist yet.

And the very concept of a business — the foundation of how we think about our local economies — could become an antiquated idea as well.

The woman who wrote for a newspaper 25 years ago on trash paper and a manual typewriter writes this on a glass screen that she holds in one hand and brushes with a finger. And I do that as though I were born to it.

Don’t tell me that we know what’s coming next. If all that doesn’t make you nervous, you might not have nerves.

Local governments are arguably the most slow-changing creatures on the landscape.

Local governments are arguably the most slow-changing creatures on the landscape — and that’s partly prudent and partly by design.

If you live off the monies of people who are typically reluctant to give you more, and you have spent three decades in a zeitgeist that suspects you of being a wasteful sloth, you’re have a monsoon-scale tailwind pushing you take it slow, don’t get crazy, don’t rock the boat.

Add to that a constant, years-long, unrelenting squeeze on your budgets, loss of one co-worker after another who used to help you carry that burden, and a constant nagging cold fear about where the budget cuts will fall next, and it’s no wonder at all that we can barely get our heads around issues like this, let alone figure out how we meet our responsibilities in the upset-the-apple-cart world I just described.

I’ve said before that we need to fundamentally change how we do economic development. But for me, just like for everyone else in the growing chorus singing from that hymnal, this picture hasn’t come into focus yet. Whether you’re me or a New Economy guru like Richard Florida, 2 there are parts that become a little more clear, and huge swaths that lurk in the shadows. Talk about seeing through a glass darkly.

But we can’t give up, we have to start figuring it out, unknowns or not. But how? We know the feds aren’t going to do this for us, or some well-funded research outfit, or our state’s economic development agency.

So what do we do?

Here’s a small way that we can all start sharpening the picture, for all of us. And I do mean, small.

Businesses that remain successful for the long term continually look forward. And based on what they see — but knowing that what they think they see could be a mirage or something much different than it appears today — they make Little Bets.

Little Bets sometimes sound like experiments, but I think that’s the wrong comparison. They’re more like probes … they stick a toe into a place where they don’t know what they will find, and by doing that they get a little more insight into the situation.

But — and here is probably the critical part for the local government world — they aren’t intended to be permanent.

Robert Peary led the first team of explorers to reach the North Pole in 1909. Think about how you do an expedition like that. You don’t send a team to the North Pole for the first time and equip them to all stay there for 20 years. The exploration team goes, they check out the environment and the landscape, they learn things, they come back, the next effort builds on that new knowledge. 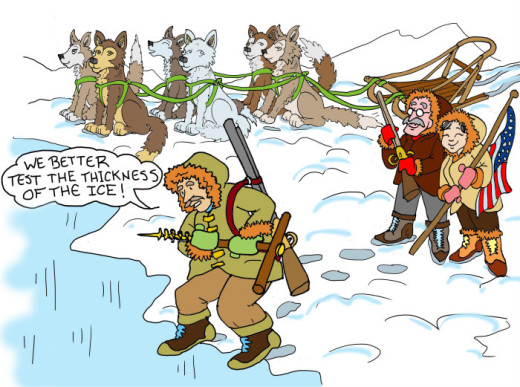 In Peary’s case, the 1909 team actually built from a series of previous expeditions through the Arctic — earlier probes that, while incomplete in themselves, made the North Pole exploration possible.

What would cost less, sending a few guys with sled dogs to the North Pole, or establishing a North Pole Program, setting them up to live in an unknown and dangerous environment for 20 years?

And as crazy risky as arctic exploration was 100 years ago, those risks were nothing compared to what they would have encountered if they tried to set up a city with what little they knew about the place. Imagine all the things that could have gone wrong. By comparison, sending a small team to go there and then turn around and coming back would have looked relatively easy. And cheap.

Peary’s expedition to the North Pole was a probe. It was a Little Bet.

A Little Bet differs subtly but substantially from what we usually do, whether within a government or through a non-profit community partner.

We tend to try to build our programs full grown from Day 1: staff, offices, missions, strategic plans, whole ball of wax. And that means two things:

First, we sink costs into the new thing that makes it Permanent. And Permanence creates both a barrier to starting (“Another program?”) and a barrier to changing (“But we don’t do that …” ).

Second, we overestimate what we know and our ability to predict the future. That’s human nature. We got away with it when economies were more predictable and life seemed simpler — or at least, when we could let ourselves think that way. But when we think we know what the future looks like, we invest more time, and people, and emotion, and money, into the thing we build. And when something doesn’t work quite like we thought, we’re stuck.

Try to unpack and reload a warehouse, and then do the same with a dog sled. You’ll see what I mean.

We would all be better off if every government, every nonprofit, every funder, put a tiny share of its budget … each year toward one carefully chosen Little Bet.

We would all be better off if every government, every nonprofit, every funder, put a tiny share of its budget — my first guess, less than 5 percent, or maybe no more than you spend on office supplies — and put that each year toward one carefully chosen Little Bet.

Treat it as an exploration — a probe into some space that you realize you don’t fully understand. Don’t just throw it at a researcher. Use it to try something out. Make a bet.

Realize, and communicate to everyone over and over, that this is different from starting a new program. And it won’t do everything everyone wants. But we can’t count on someone else to give us an easy answer. So we’re going to send out a probe.

This is the most important part — and it’s the piece that will require the deepest change from how we usually work (God knows we’ve all been stuck with Pilot Projects before):

1. The results of the Little Bet have to undergo a clear-eyed evaluation. What worked, what didn’t work, what did we learn. And most importantly, What Do We Still Not Know. In an economic development strategic planning training that I did recently, I pushed hard at the fact that no one wants to be evaluated. But we know why we have to. So we have to put on our big kid pants and just do it. Among all those professionals, no one said no.

2. The results of the Little Bet have to be shared … with your community, yes. But also with your neighbor communities, your region, other places that grapple with the same issues that you do.

That’s not just being nice, that’s selfish self-interest. You will never, ever put together enough office supply budget to do all the Little Bets your community needs. You’re going to have to get serious about sharing your results, so that others share their Little Bets with you too, so that you don’t have to do them all yourself. Scientists build their experiments based on the findings of others, and they share their information transparently.

Our methods in the local government world may be too disjointed, too catch-as-catch-can at this point to do that research-sharing as well as the scientists do. Which probably helps explain why what they know has changed faster than what we do. We may need better systems for sharing our Little Bets. But we can at least start with the organizations we have. The key, though, will be to differentiate clearly between the Little Bets and the Our Successful Programs … and especially between the Little Bets and the Look How Great We Are In My Town stories. Both of those can be useful, but not in the same way the experimental notes from Little Bets would be.

3. Change. Expect change. Assume change. We have a hell of a time killing programs, usually because someone has a deep stake in it. Someone has benefited from it, invested in it, cares about it … has come to rely on it. Little Bets have to be presented and understood from the start as a learning tool, as a probe. From whatever works, from whatever we learn from it, something will grow from it. But this is not a Program. It’s a probe. It’s not permanent.

At this point in our economic, planning and local government history, we’re 500 miles from the North Pole, and we have to be honest and admit that we have absolutely no idea what to expect. But we know that we have to go there, and do it in a way that helps us learn.

No one else is going to hand us a map. All we can do is load up our dog sleds. And learn from each other.

Editor’s Note: Della’s discussion of “little bets” reminded me of the Project for Public Spaces’ “lighter, quicker, cheaper” approach to making public park and open space improvements — where you do small experiments to see what works, and then adjust, and adjust, and adjust based on user feedback. It’s also what’s been done in New York City’s already famous conversion of Broadway from a traffic-jammed artery into a pedestrian street. See my post on this.

Coming Next: I See Usability