See the previous section of The Local Economy Revolution, 1099ers in Your Economy 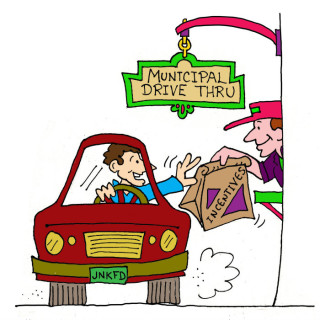 Drive up window at a fast food restaurant, with person from restaurant leaning out the drive up window handing the driver in the car a brown bag that says: “Incentives” — also have a sign or something on the building saying: “Municipal Drive Thru.”

“I am beginning to think that economic development incentives are analogous to junk food for our communities. In the short term, they might satisfy our hunger and we might even feel better about ourselves and our community. But in the long run, the questions remain:

Is it worth it?

Will our communities continue to bloat up with empty buildings?

Could have the dollars that were used for incentives been better used elsewhere?

Was the easiest decision also the best?”

We have squawked too much about incentives over the past couple of years. A lot of times the “debate” has sounded more like chickens in a pen than reasoned professionals: yes-no-yes-no-yes-no.

The key issue is that we have deep and substantial needs in communities and regions that are calling us to facilitate sea changes in economies, and in many cases our incentive policies do not move us in the direction of those goals. Or they might be doing that, but we don’t know if they are, we don’t have the right information to know what they’re doing, and as a result we can’t demonstrate whether they are doing what we need them to or not.

We got used to being able to just wing this — just assume that everything was working fine — when we had local economies that were flush enough to hide a little sloppiness or some wishful thinking or simple assumptions in how we handled incentives. But now, with relief for budget pressures nowhere in sight, and with basics like how work works changing faster and faster, we don’t have that slack anymore. There’s just nowhere to hide.

I am not against incentives per se. I have spent much of my career working with downtowns and disadvantaged communities. A well-placed incentive can tip a place or a business sector from economically infeasible to economically possible, and when that happens it has direct and profound impacts on the people who live and work and invest in that community.

But if an incentive isn’t having that kind of impact, it’s wasting money that we just don’t have to waste anymore.

Incentive practices will eventually change because the forces on them are only getting stronger. The question in my mind is, how much of our limited resources will we waste with trying to hold back that tide? And how will our resistance affect the communities, and the people, who don’t adapt and find themselves trying to swim in those waters?
Before we start ….

If you don’t have a clear, priority-driven, broadly-endorsed economic development strategic plan … then stop giving out incentives now and get yourself a plan.

If you don’t have a clear, priority-driven, broadly-endorsed economic development strategic plan that aligns all the players around shared goals and enables them to take meaningful action to meet those, then stop giving out incentives now and get yourself a plan. Otherwise, you’re swinging in the dark and wasting money.

I don’t care what kind of plan you do, as long as it

• Includes decent but not overwhelming data and trends information,

• Provides a clear and broadly shared statement of objectives — that is, not just worked up by your five favorite insiders,

• Identifies an ambitious but achievable collection of things that needs to get done, and identifies how that important that effort is and who’s going to do it. If every point is Super High Priority, and everything’s going to be done by either Our Office or Someone Else, start over. You made a laundry list, not a plan.

If you don’t have a plan, put a bookmark here and go get a plan. Seriously.

Trying to craft a cogent and fair assessment of the incentives issue and the responsibilities of those of us who care about communities is feeling like the Gordian knot … you may never be able to lay the string out neat and pretty-like.

I don’t think there’s any question that the principle behind incentives, as a rule, has legitimacy, and that incentives can be important. When I served on the board of the Main Street program in Green Bay, we offered tiny little incentives — a few hundred dollars for a new sign or a building facade improvement.