Editor’s Note: This concludes our serialization of the first two parts of Della Rucker’s The Local Economy Revolution. If you’re interested in reading part 3 of her book, go here for more information.

We’ve been talking (or, well, not talking) about incentives in economic development in the U.S. a lot lately. They work, they don’t work. They’re necessary, they waste money. You need this control, that recapture method, no you don’t, that’s gonna backfire. So on and so on.

Perhaps it’s time to take a big step back — to revisit what an incentive was supposed to do in the first place. And perhaps it’s confront where and how our practices are going awry, and re-formulate incentives programs — not throw them away, not just control them better, but fix them, so that they do what our communities need, and so that they are worth the money we invest in them.

The purpose of an economic incentive is to make something happen in the free market that market forces alone can’t do.

The purpose of an economic incentive is to make something happen in the free market that market forces alone can’t do. An incentive is supposed to exist to give the market a push in a direction that it can’t / isn’t going by itself at this moment. It’s there to fill a gap.

So, if an incentive is supposed to do what Econ Dev 101 said, it follows that any incentive should have the following characteristics:

Time limited — not just in terms of a specific deal having an expiration date, but time limited in availability. 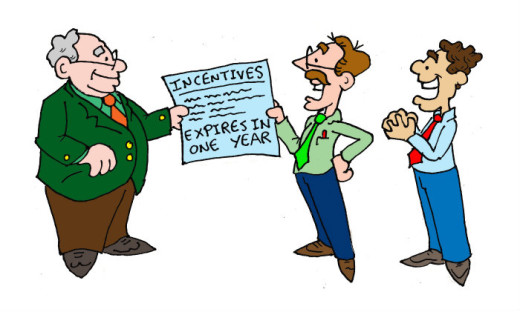 If the purpose of the incentive is to change the market, eventually the incentive should facilitate a change in the free market by demonstrating that a business type or a business location can actually work economically. If that case has been made — if businesses can make a go of it — then the incentive has done what it was designed to do, and it should not be offered anymore.

A market that can’t survive without the incentive is probably too fragile, too risky to the surrounding community to be worth supporting.

Extending the incentive might be OK if that market opportunity still exists but hasn’t fully taken off yet, such as might happen if an area experiences a natural disaster. But the incentive has to stop being available at some point. If it continues after the market no longer needs it, it’s not levering the market — it’s distorting it.

And a market that can’t survive without the incentive is probably too fragile, too risky to the surrounding community to be worth supporting.

The incentive has to be targeted specifically to emerging or sleeper market opportunities — like the “but for” test that many incentive programs at least give lip service to, but more.

An incentive should be available, not just when Project X won’t work without it, but when the larger market opportunity, with all of its potential, can’t take off without it. The incentive shouldn’t be about that specific business, although it may technically get applied to one business. An effective incentive will demonstrate potential to grow the opportunity — to grow the market segment, the market ecosystem. To grow something that is bigger and more impactful than any one business.

The argument (the provable, demonstrable argument, as much as possible) has to be that incentivizing Project X will facilitate the growth of a whole sector, not just one firm.

Part of the reason why the focus has to shift from incentivizing one business to growing a market is that most of us aren’t going to see many individual business opportunities that can single-handedly make a big impact on the local economy.

The purpose of an incentive has to be building an economic sector, not just one individual business.

We all know that businesses are getting smaller and smaller, and almost no one is seeing the four-digit employment investments anymore, no matter how much sugar they throw in the pot. 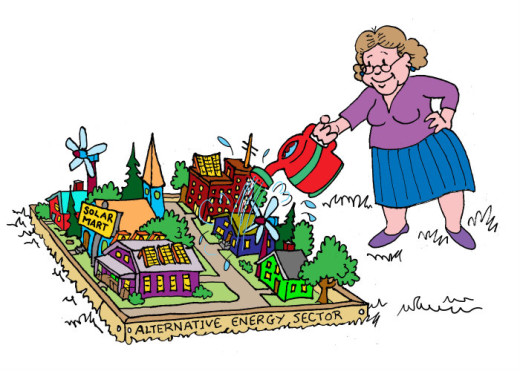 A nice side benefit: an incentive that’s focused on building a sector rather than a business can also spread out the risk. Instead of chewing our fingernails worrying that Business Y is going to renege on its incentive agreement, or move the day after the incentive runs out, or somehow otherwise break that supposed bond of trust and smear a lot of egg on our faces, an incentive strategy that focuses on building a sector should lessen the economic development initiative’s dependence on any one business.

If Business Y pulls something down the road, a strategy that has focused on using incentive money to build a sector, rather than just make Business Y happy, should have a decent chance at having created a larger system in which Business Y’s employees, suppliers, etc. can find other beneficial options.

So the question to ask isn’t, “Do we need to do this incentive to get this business?” The real question is, “Are we building a base of human capital, expertise, relationships that can outlive any one business?”

Remember, businesses aren’t just getting smaller, but there’s lots of evidence that the life span of the average business is shrinking as well. So it makes less and less sense to bet the farm on one of them, even if that one looks really cool.

Remember, a lot of communities thought General Motors looked like a good incentive risk in 2005.

This point follows on to the need to feed the growth of a sector, not just a business. Whether we’re talking about office, service, manufacturing, tech, whatever, we know more and more that the most valuable and most critical asset we can offer is the skills and capabilities of our workforce.

If we need businesses to help us understand the sector’s workforce needs, and people’s capacities are at least partially built through their work experience — and those businesses where they work become smaller and shorter-lived and generally more fluid everyday — how much sense does it make to just hand businesses a piece of our precious funds and hope that something good will happen for its workers?

Why not structure some conditions around building the capacity of their employees?

Why not have an agreement about how they will support or participate in the training, networking, connection-building needed to grow their sector in your community?

That’s not going to ask much of them beyond basic good business practices (retain your employees because that’s cheaper than hiring, build good relationships with your suppliers so you can get credit if you need it, etc.) You might as well give them a little extra push in that direction — especially as businesses get smaller and owners and managers may not always fully realize how much they need to be part of the larger system. And since they’re going to have to do at least some training, you’re probably not adding significant cost.

Here’s one you know, but maybe don’t want to say out loud: Your citizens are sick of throwing their hard-earned tax money at businesses that they don’t think give a damn about their community.

Popular pressure is probably the biggest single threat to current incentives practices — and as people get better at self-organizing, and as anyone with a mobile phone becomes their own broadcast network, that pressure is going to build. That’s the nature of the social media, internet world. So why not give yourself some cover from the public watchdogs, and use incentives to prod businesses to be better community citizens? 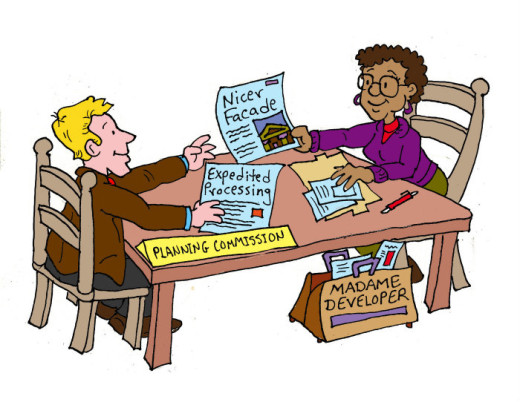 Plus, you’ve got precedent. Planning commissions routinely require developers who want a variance or special zoning to do a little extra — more landscaping, higher quality facade materials, etc. If you, Madame Developer, don’t want to do that, you can use the standard zoning without going through any extra process. But if you give us a little extra, you can use our expedited process or get special exemptions.

Why not ask a potential incentive recipient, explicitly, how will you give back? How will you help build our community? How can you contribute as a corporate citizen?

After all, it’s your taxpayers’ money. They want more return on the investment. And sooner or later, that’s what they’re probably going to demand.

Manage our risk if the project doesn’t work as we hope it will.

Clawbacks are fine in some cases, but if your goal is to facilitate meaningful change in the local economy, demanding the money back could backfire. Venture capitalists demand high returns, but they also expect that some of their investments will go belly-up. And in the tech world, which tends to be a leading indicator for a lot of other long-term growth sectors, the entrepreneur who has failed is often considered a better investment risk for next time, because presumably he/she has learned a few things that will make the next attempt better.

Trying to grab the money back in a case like that could be shooting larger goals to grow a sector in the foot.

Don’t get me wrong, people absolutely have to be held responsible for their actions, and communities cannot just say “oh, well” and watch their money get piddled away on boondoggle projects and pipe dreams.

But elaborate legal mechanisms to recapture as many red cents as possible may be less useful to communities than two other simple strategies: better evaluation of risks and benefits, and spreading the risks across more incentive recipients.

The poor overlooked stepchild in economic development is business retention, and its sidekick entrepreneurship. Let me rephrase: we give those two a lot of lip service anymore. A lot. But where does the money in the budget mostly go?

There’s an old saw that says that where your treasure lies, there your heart lies. There’s so, so much evidence that supporting local businesses and helping grow new businesses makes for a stronger economy long-term than does any recruitment. But if we know that, why does so much money go to incentives, and so little to doing meaningful things to help local businesses get better? What else can we do with our funds to improve their capacity and resilience? What training do they need? What connections? What information?

Editor’s Note: This concludes our serialization of the first two parts of Della Rucker’s The Local Economy Revolution. If you’re interested in reading part 3 of her book, go here for more information.