See the previous section of The Local Economy Revolution: I See Usability

In today’s installment, why pulling harder won’t necessarily bring it back.

I learned a long time ago that I am way too good at buying into what theater people call the willing suspension of disbelief.

I learned a long time ago that I am way too good at buying into what theater people call the willing suspension of disbelief — what you do when you get caught up in an acted-out story and react to it as though it were real, even when you know darn well that it’s make believe.

I have a ridiculously long list of movies that hit me so hard when I watched them, got me so worked up, that I know I can never watch them again. What Dreams May Come? Forget it. The Mission? No freakin way. Up? It’s a cartoon, after all … crap.

I knew the first time I watched Up that I needed to skip the first five minutes about the main character’s life with his wife and his losing her after a long happy marriage. Bull’s eye on Pressure Point #1, but we can handle this.

Of course, near the end of the movie, that character has to re-confront his loss, accept it and let go. I walked in on my 10-year old son watching it last night (I had purposely avoided the room all evening, but it was getting late and I wanted him to go to bed), and ended up watching the last five minutes with him. Cue the waterworks.

In his book The Great Reset, Richard Florida writes most eloquently about the underlying sense of loss and struggle to move on that pervades many communities, particularly in the Rust Belt and other areas that have struggled to transition to the new economic epoch that is unfolding.

As I have mentioned here before, many of the places I know best have been struggling to deal with that loss, and make that transition, for decades. We watched our parents come face to face with the consequences of a changing world long before we ever heard of Lehman Brothers.

Fundamental change will be much longer in coming than you can imagine. You’ll survive. … But there’ll be no ‘getting over’ your past, only moving beyond it. 1

You also can’t get back your past, as much as you might want it. It just doesn’t work. 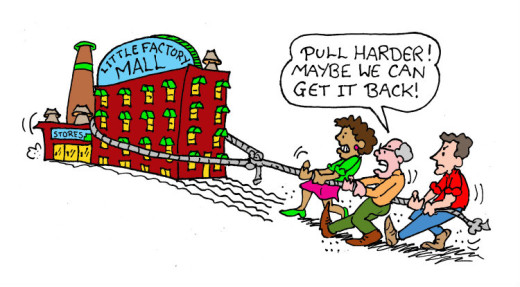 I have spent more time than I can count with communities where leaders — council members, Chamber of Commerce officials, and others — have said to me with complete sincerity, “we just need to get the shoe factory back.” Or, a slightly more sophisticated approach to the same idea: “We just need to land another big factory/a new shopping mall/a new … something.”

Go find that unicorn, and when we bring it back to our community, we will all live happily ever after!

We who work with communities know, or should know by now, that this is a fantasy. The world has changed, and is changing. We have to get on with it.

The psychologist Elizabeth Kubler-Ross described grieving as a five-step process: denial, anger, bargaining, depression, and finally, acceptance. In Up, the main character reaches the point of acceptance when the house in which he lived so happily with his wife, and which he has clung to and protected throughout the movie, floats away into the distance (If you haven’t seen it, trust me on that one. It involves a lot of balloons.)

For some of us, the greatest challenge we face is to help our communities allow their past identities — industrial heart, shopping mecca, favorite tony suburb — float away.

For some of us, the greatest challenge we face is to help our communities allow their past identities — industrial heart, shopping mecca, favorite tony suburb — float away. In the community context, that requires a combination of:

Florida, in The Great Reset, also paraphrases and then quotes Howard Fineman of Newsweek:

[The lesson of resurgent places] is to pick yourself up and get back to work. Don’t expect the federal government or anyone else to save your city or bring back your industries. ‘It is that the old world will inevitably disappear, and that creating a new one is up to you, not someone else.’

We have to remember to honor and love our pasts, but not cling to them.

We have to remember to honor and love our pasts, but not cling to them. That’s true for us as people and us as communities. Our current usability may be different from what it used to be. But we won’t find out until we stop trying to recapture the past.

Only when we can help our communities do that work of letting go do we allow ourselves to have space for What We Will Be Next.

Coming next: Everyone is Special … Really!