Today, what can go wrong when your community turns the wheels of a major project over to a “Grand Architect.”

About a year ago, an interview with one of the current luminaries of the New Urbanist movement was published in which the august personage asserted that public participation requirements are too onerous to enable great design work to be done. The ignorant NIMBY rabble kept getting in the way.

Early in my career I worked as a public historian and historic preservation specialist, so rather than launch immediately into my opinion, let me tell you a true story.

In the 1950s, business owners in downtowns across the country became agitated over the fact that their central business districts were facing a double challenge: increasing amounts of traffic congestion and increasing competition from new suburban shopping centers. One of the cities that faced this was Green Bay, Wisconsin, which had a very energetic and forward-thinking business leadership circle. I knew many of those leaders years later, when I had responsibility for dealing with some of the unintended consequences and externalities of their decisions.

Green Bay, like many other cities that drank the downtown mall Kool-Aid, continued for years to struggle with a downtown dominated by a windowless, dispiriting, too-much-vacant hulk where its heart should be.

The good men of Green Bay did what most forward-thinking leaders do when faced with a fearful challenge on the horizon: they hired a consultant. The consultant they chose was Victor Gruen, 1 an architect who had recently gained fame designing the nation’s first enclosed shopping mall, in Edina, Minnesota. In the couple of years that had lapsed since the Southland Mall plans hit the streets, Gruen had become a celebrity — the Andres Duany of his day.

In a 2004 article for The New Yorker, Malcolm Gladwell described Gruen as “short, stout, and unstoppable, with a wild head of hair and eyebrows like unpruned hedgerows.” 2 Gladwell summed up Gruen’s impact on that era, and today, pretty succinctly:

“Victor Gruen didn’t design a building; he designed an archetype. For a decade, he gave speeches about it and wrote books and met with one developer after another and waved his hands in the air excitedly, and over the past half century that archetype has been reproduced so faithfully on so many thousands of occasions that today virtually every suburban American goes shopping or wanders around or hangs out in a Southdale facsimile at least once or twice a month. Victor Gruen may well have been the most influential architect of the twentieth century. He invented the mall.”

Gruen insisted in Green Bay, as he did in dozens of other cities in the 1950s and 1960s, that the key to solving downtown’s problems was to completely separate vehicular traffic from pedestrians.

You don’t have to be Gladwell to understand what happened. It took 20 years for Gruen’s vision to obtain some form of reality, and during that time the City’s business and political leadership, and its planning staff, stuck to Gruen’s plan as diligently as the real world constraints of financing and private development would enable. Of course, those real world constraints enabled it a lot less than Gruen assertively but idealistically envisioned.

By the time it opened in 1977, the new Port Plaza Mall and associated parking lots and garages had obliterated acres of downtown buildings, dislocated a hundred residents, and sent dozens of businesses to liquidation.

By the time it opened in 1977, the new Port Plaza Mall and associated parking lots and garages had obliterated acres of downtown buildings, dislocated a hundred residents, and sent dozens of businesses to liquidation or the far edges of the newly-sprawling city, where many of them remain today.

The collateral damage of grand ideas. If Gruen thought of them at all, I wager he simply thought that was the price of progress.

All of this might be OK, at least from a strict economic standpoint, if Gruen’s grand plan had worked.

Port Plaza Mall lost money from virtually Day 1. By the early 1980s, Port Plaza was doing so poorly that the City took the advice of another consultant and bulldozed another full block of buildings to add the magic third anchor, which they were assured was the way to fix the mall’s problems. By the early 2000s, that anchor was gone. 3

Green Bay, like many other cities that drank the downtown mall Kool-Aid, continued for years to struggle with a downtown dominated by a windowless, dispiriting, too-much-vacant hulk where its heart should be. Meanwhile, the region’s former skid row, right across the Fox River within eyesight of the mall, became the hottest urban neighborhood in the region, and the winner of a Great American Main Street Award. 4

This isn’t a story about the virtues of historic preservation, although the Green Bay story is certainly a good object lesson for the old Kenneth Galbraith quotation.

Gruen’s idea didn’t fail because Green Bay wanted old buildings, or because the people who lived and worked in those old downtown buildings did something to undermine the plan. Like most people of that era, the majority of the City’s leadership and residents placed their faith in the expert and in the idea of progress. What gut misgivings they may have had were pushed aside. The plan was made by an expert, a national expert, right?

Gruen’s mall failed because he envisioned and sold an ideal solution without giving attention to economic realities, and without consideration of the myriad of unforeseen factors and unintended consequences that could, and did, develop. It’s possible to say that Gruen could have tried to understand development economics, but even if he did, fully anticipating those unforeseen factors would have been impossible. Gruen stood at the beginning of an era, and there was no way anyone could anticipate how the world would change in a few short decades.

The greatest failure of Gruen’s plan was that he did not recognize or acknowledge that his Grand Vision could very well turn out all wrong.

Our landscapes are littered with Grand Visionary Architecture that was supposed to fix something, or create Something Big.

We should have learned by now that our Grand Visionary Designers are not infallible. Our landscapes are littered with Grand Visionary Architecture that was supposed to fix something, or create Something Big. And so few of those grand visions ever came out the way they were promised, or managed not to create a new set of problems.

Never heard of Port Plaza? That’s because there are Port Plazas of one flavor or another in virtually every city in the country. Some are malls, some are stadiums, some are brutalistic, forsaken parks. You can pick them out easily by their Grand Design ambitions and their total lack of life.

The fact that we haven’t learned this lesson is a blot on architecture, and planning. And economic governance. And community leadership, writ large.

Understanding the real reasons why people oppose a project requires the willingness to do so, the humility to listen, and the internal fortitude and self-assurance to admit that possibly, oh just possibly, we don’t know everything that there is to know. That is the real mark of wisdom.

Marquee designer types have the privilege of maintaining a distance from the dirty work of making a project functional in real life. I have worked with many of the nameless landscape architects and architects who are hired by the developers after the Grand Visionary types are paid, have gathered their glory and big checks and left. And it is those highly competent, highly talented professionals who deal with the fact that the Grand Architect ignored the steep slope under that proposed building, or face the fact that the charming landscaped driveway empties out onto a major intersection and those planting beds will block other drivers’ ability to see cars pulling out.

How much of that could the marquee designers have learned, and anticipated, and fixed, by simply listening with honesty and humility to the people who are experts in that specific location?

How much would Gruen have learned about how the community’s businesses would or would not fit into his Grand Design? 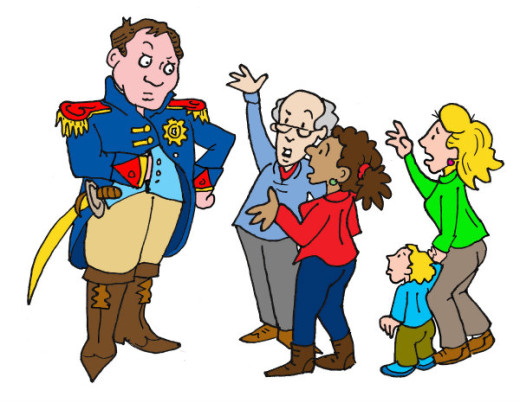 If the people who live around a proposed development oppose that development, chances are they know something that is important to the health of their neighborhood, and the larger community as well.

If we think that we are too much hot stuff to have to listen to them, then we are no better than little Napoleons in big capes, creating monuments to our hubris that our children and grandchildren will have to clean up.

And in fact, we will be worse than that, because the object lessons of the damage we can do in our ignorance already exist all around us.

For two short news stories by WLUK-TV FOX 11 in Green Bay about the demolition of the Washington Commons Mall (originally called the Port Plaza Mall). The first was posted on June 29, 2010, the second on March 2, 2012.