See the previous section of The Local Economy Revolution: The Paper Machine and the Gardener 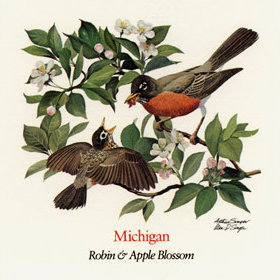 Q: What’s the flower seen in this U.S. postage stamp on the left?

A: An apple blossom. It’s the state flower of Michigan. 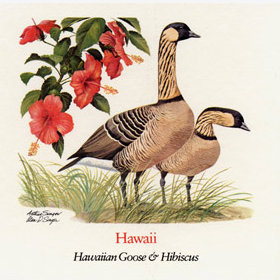 Q: What’s the second flower seen in the stamp below?

A: A Hibiscus. It’s the state flower of Hawaii.

Have you ever tried to grow these two plants in the Midwest? I have. When I lived in Green Bay (about the same latitude as Traverse City, Michigan), I had one scraggly apple tree in my backyard — a senior citizen estimated to be about 50 years old. The thing was — no way around it — ugly. Gnarled branches, sort of bent over to one side, asymmetrical, half-bare. And we did nothing to take care of it.

Despite its looks and our lack of husbandry, every spring, that tree put out a drift of blossoms over its branches, and every fall it produced apples…they tasted awful, but they were apples, nonetheless.

On a recent return visit, we drove by the old house and peeked in the backyard, and there was that same old ugly tree, laden down with fruit.

I don’t have an apple tree when I live today in Cincinnati, but I do have a hibiscus tree. It’s actually our second hibiscus — my husband bought a second after the first one finally limped to its demise. We have to keep it in a pot because it can’t survive the winters, and we have to stake it up in the pot because it doesn’t have a deep enough root system to keep it upright in even a little bit of wind when we do put it outside in the summer. The hibiscus goes through random periods where it drops leaves all over the place, and when it’s inside it attracts swarms of little white bugs and a sort of gooey residue. This hibiscus tree has lovely blossoms, when it blossoms, but the rest of the time it’s a plain old pain in the neck. It probably would have died in a week in Wisconsin.

To grow an apple tree in northern Wisconsin (or Michigan) takes very little effort. To grow a hibiscus in southern Ohio takes a huge amount of effort.

If the goal of your gardening is to produce flowers or fruit, growing an apple tree is going to be a more efficient, less labor-intensive way to meet that goal, in that climate, than growing a hibiscus. They don’t look the same, and the one that isn’t From Here is always going to look more exotic and enticing. But they both produce flowers, and one produces the results we want in this climate much more easily than the other.

Conventional approaches to economic development put a huge amount of emphasis on trying to grow exotics in places where they do not naturally grow.

Conventional approaches to economic development put a huge amount of emphasis on trying to grow exotics in places where they do not naturally grow. We send economic development professionals on trade missions all over the world, we bleed ourselves to be able to announce that we have the lowest tax rates, and we pour millions of dollars into incentives to recruit businesses – or retain them after they are here.

But unless a business needs what we uniquely have to offer, we will never have confidence that we are building for the long run. We can never be sure that they won’t pull up and move to the next cheaper place when this load of tax incentives run out.

There are two truths of economic development that we don’t often talk about. The first is that very, very, very few businesses relocate in a year, and fewer now than in years past.

All of the chasing after site selectors that economic developers often do, all of the money and effort and travel spent trying to land that big businesses. More and more, it’s a hunt for elusive game.

There’s a reason why wealthy Edwardian big-game hunters went to Africa for safaris: they had a lot of money. You can spend a lot for the thrill of the chase when you have a lot to spend in the first place.

Chasing big business recruitments, for most of us, equals going after a big payoff with extremely long odds.

Chasing big business recruitments, for most of us, equals going after a big payoff with extremely long odds. Much of the money spent on the chase will see little, if any, return. To a great extent, reliance on big business recruitment is a bet on the roulette table: fantastic if you hit it, but hardly what you want as your retirement savings strategy.

The other truth of the matter is that most businesses do not primarily choose a location on the basis of tax incentives. When most businesses do go in search of a new location, their first screen is based on their business’s needs — regional location, workforce skills, access to transportation, ability to recruit key talent, etc.

They will ask for tax incentives because that’s part of the dance, and they will threaten to go somewhere else that has better tax breaks because it’s in their best interest to get a little more if they can.

Communities seldom win business that they would not otherwise get through tax breaks. Most business’ needs are much more complex than that.

Given that betting on the exotic requires so much additional effort for such long odds, communities that focus on cultivating the businesses and economic opportunities that grow naturally in their area have a much better chance of long-term economic health and resilience.

Your native businesses are the ones that are adapted to your social, cultural and economic environment from the start, and they are the ones who are in the best position to anticipate and adapt to changes in the world surrounding them. They may be humble, even boring, compared to the unusual and flashy from Somewhere Else, but they are your safest bet for long-term growth.