In today’s section, Della talks about a very important lesson she learned from her father.

I’ll explain where that weird word comes from in a minute. But here’s the toe-in-the-water version:

Economically valuable community assets often include things we’re not used to thinking of as assets.

Even the most messed-up places, the most pathetic, the most boring, the most abused by the law of unintended consequences, have assets. Something great about them. Or at least interesting. Something special, at least kind of special.

Something we might entirely overlook, or take for granted, or just see as a part of the landscape, not an asset that’s actually worth anything. Something we probably didn’t see as a feature worth putting on the economic development web site, or highlighting in the video about our 8,000 acres of available industrial land and “great work ethic” population.

Economically valuable community assets often include things we’re not used to thinking of as assets.

Assets can be people — groups of people and their characteristics, like their experience building things or providing services to a certain kind of operation.

Assets can be business expertise, rate of volunteer involvement, community theater, access to assets that don’t lie within your boundaries.

Assets make your community unique. They’re what give your ecosystem the opportunities that don’t place you in direct competition with Everyplace Else. They’re what make you valuable to the people who want what you can offer. They’re what give you the best chance out there to attract your own little slice of Talent. And they’re the raw materials of getting yourself out of the Conventional Economic Development Race to the Bottom.

So see usability. And build on usability. In the next few sections, we’ll start to explore how.

That was my dad’s favorite saying. Dad was a man with no hesitation about pulling things off the curb in front of the neighbors’ houses. But he wasn’t looking for salvage or a quick couple of dollars. He was looking for usability.

You’d probably call Dad a tinkerer. He always had projects in process — a car (or three) in various stages of disassembly on their way to being restored, an electronic gadget he insisted would work again if he could just find the loose wire, an idea for making something from the extra tin cans he brought home from the factory or the brass-plated fittings that a friend at the foundry gave him or the pile of tire irons he found on garbage day around the corner. 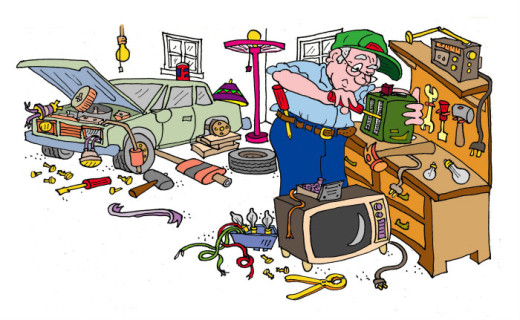 When I grew up and went home to visit, I knew he would want my undivided attention as he showed me his latest finds and played out his new ideas for making flowerpots or bird feeders or paint brush holders or whatever.

He would pull himself up to full (not very tall) height, puff out his (very slight) chest, hold up what looked like a random piece of junk, and declare: “I … see… usability.”

One of my strongest memories: he would pull himself up to full (not very tall) height, puff out his (very slight) chest, hold up what looked like a random piece of junk, and declare: “I … see… usability.”

I’d nod and smile, but I didn’t see it. And even when he did complete something (which didn’t always happen), I failed to see the achievement in it (these weren’t great works of art by any stretch).

But he never said he was going for artistry. He saw usability.

Maybe this is why my dad, who never finished college, understood the value of old places long before I did.

Growing up in the small town where he also had gone to high school, the buildings and houses all around me seemed … tired. I knew that my friends who lived in the newer neighborhoods had whole house air conditioning, heat ducts instead of the metal radiator in my room that clunked and hissed but seldom seemed to heat anything, and walls that didn’t require tedious, unending paint scraping every damn summer.

I did eventually turn into a historic preservation specialist during the 90s — I have the distinction of being responsible for listing some of the ugliest buildings on the National Register of Historic Places. In northern Wisconsin at that time, preservation mostly mattered to a few … well, the common perception was, crackpots. As late as the early 1990s, Green Bay still had a 1960s-era blight removal plan that identified most old downtown buildings for demolition as soon as the city could get them. I crawled through the basement of one of the final ones, documenting its last days, before it was demolished. I’m sure I still have those photos.

Green Bay at that time was just starting to understand the economic benefits of preservation — but Dad understood entirely.

Green Bay at that time was just starting to understand the economic benefits of preservation — but Dad understood entirely. He started to mail me clippings from the Cleveland papers (remember actual clippings?). And when I got on the phone with him, he was more excited to talk about a building or bridge rehab that he had read about than about what he and Mom were doing.

About nine months before my second son was born, Dad was diagnosed with a brain tumor. My last time with him was about a month before the baby was due — last time I could travel from Cincinnati, where we had moved, to Cleveland, a drive of about 3 1/2 hours. Shortly before I left to go home, Dad sat me on the couch and pulled out a large envelope full of clippings. By this point, the cancer in the speech center of his brain was wreaking havoc on his ability to read or write, and my name on the outside of the envelope was spelled with three L’s.

We spent a long time going through those clippings — all sorts of building rehabs and downtown revitalization stories in Cleveland and South Carolina and places that I had never heard of. And at one point, he looked at me directly, and told me that he was proud of me, that what I was doing was important.

This at a time when I doubted whether I could keep working, with a toddler at home and a baby on the way, when the cultural pressure to hang it up seemed to roar constantly in my ears.

These places matter. What you’re doing to help them matters.

Dad died a week after Jonathan was born. We gave Jon his name because that was one that Dad liked.

After all these years, and all this reading and listening and talking, I still don’t fully understand why old places matter to us — obviously there’s the sense of history, the fact that these are often places that are built at the human scale and are thus more comfortable for us, the solidness of the materials, so on and so on.

But why do they matter so much, and on such a primal level?

Even the most run-down, aesthetically unpleasing places have usability. They so often have the potential to be so much more than they are.

Maybe it’s because even the most run-down, aesthetically unpleasing places have usability. They so often have the potential to be so much more than they are. And that is where their greatest value, emotionally and economically, lies.

In the next few sections we’ll explore some of the factors that can inform our thinking about our places, to help us re-discover and re-claim our places’ usability. And to find within that our best potential for economic sustainability.

Coming Next: Making Room for What We Will Be Next