As many other commentators on economic development have pointed out, we waste a lot of money on incentives that, if we honestly went back and evaluated the results, didn’t generate the payoffs we promised or were promised. Between the dozens of official reports and exposes that have been generated on the subject nationwide, there is too much of a preponderance of evidence on that point to come to any other general conclusion.

Sometimes, like in the case of Rhode Island’s 38 Studios fiasco, it’s obvious quickly that the incentive was a bust. Many times, we don’t understand how wasted the effort and the cost was until years later — if we are ever aware of it at all.

Here’s where it starts getting tough:

Both the scope of problematic incentives in the U.S., and the fact that incentive programs are developed in a keeping-up-with-the-Jones, you-gotta-play-the-game mentality, indicates that the problem with incentives isn’t incidental — it’s not simply a factor of some bureaucrats not doing their due diligence properly, or some short-sighted misunderstandings. It’s across the board.

It’s systemic. It’s not a melanoma, confined to a few spots and relatively easy to remove. It’s more like a leukemia, or a cancer that has metastasized. 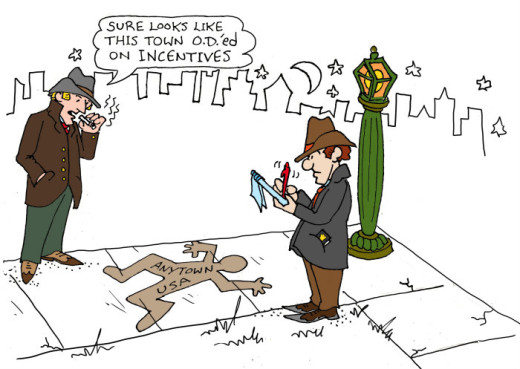 So what’s the source of the systemic incentives illness? And how does anyone solve this?

Here’s the deep problem: incentives are easy. They are an intellectually and (until recently) politically easy way to make it look like we are doing something good.

Here’s the deep problem: incentives are easy. They are an intellectually and (until recently) politically easy way to make it look like we are doing something good — something that justifies our existence.

Until people wise up to the fact that the golden ring they thought you had grabbed for them turns out to be painted plastic. Until they notice that the new retail center was followed by vacant storefronts in their neighborhood, or the cool tech company we all pinned our hopes on never lived up to its promises, or we got that great new office building that is supposed to lessen our tax burden, but we’re still being asked to pass a huge school levy and the park district is turning off the lights.

Or they don’t notice, but these things are happening, and then they cut your department to balance the budget.

Here’s the deeper problem: we haven’t been able to stop chasing those golden rings because we can’t (or don’t) figure out whether the ring is worth what it costs, or not.

Part of that has to do with the analytical problem that many writers, including Louise Story of The New York Times have identified 1 — the pervasive lack of postmortems, of doing the simple kind of look-backs that we know you have to do if you’re going to learn from your failures — or your successes.

But the bigger part of that deeper problem is that we have defined the cost of the ring too narrowly. One of the writers on the LinkedIn Economic Development 2.0 group said it clearly in describing his community’s residents:

“The impression is that we aren’t serving the public and second we aren’t held accountable.”

We like to assume that those new businesses and new jobs are having all sorts of benefits to the community. But what if they are not? What if they are cannibalizing another part of the local economy? Imposing costs on the local government that will cut its ability to support the community’s quality of life? Putting the community at risk of agony down the road because that company that we bet the farm on didn’t fit well, sold us snake oil or had no reason to stay when the incentives ran out?

What if the cost of “progress” means destroying a heritage that the community will never be able to get back?

We want to think we can do our work in silos — that we are only responsible for our little bailiwick. It’s easier that way. It’s safer that way. But it’s deadly, because what we do in one silo affects everything else. If we don’t try to understand those interdependencies, or worse yet, ignore them in the name of “that’s not my department,” we dig ourselves and our communities ever deeper into the hole.

Here’s the deepest problem of all: fixing this systemic illness, and making a difference for the communities we care about, requires professionals and elected officials and passionate community members to own their responsibility. We have no choice except to exercise the leadership that we alone can claim.

We have to finally, finally give up on “shoot what flies and claim what falls.” We have to admit what we know in our guts: deals that look like wins on paper have the potential to hide cancers that will eat at the lives of our communities.

Editor’s Note: CityLab posted a fascinating article by Richard Florida on the use of incentives. See “Reno Won Tesla’s Gigafactory. Was It Worth It?“