There were many excellent sessions at the International Making Cities Livable conference. I’ve already highlighted several of them: Susan Anderson’s talk about planning for Portland’s 20-Minute Neighborhoods; Dr. Richard Jackson’s remarks on the strong connection between public health and the built environment; Rex Burkholder’s overview of the Portland metro area’s efforts to reduce greenhouse gas emissions; and presentations by Suzanne Crowhurst Lennard and Professor Lamine Mahdjoubi about how to make our communities more child-friendly.

I want to take a few minutes today to highlight three other conference presentations I found particularly interesting.

Ellen Dunham-Jones, AIA, is a professor of architecture and urban design at the Georgia Tech School of Architecture. She’s also author of a (relatively) new book, Retrofitting Our Suburbs, and serves as Chair of the Board of the Congress for the New Urbanism.

Dunham-Jones ticked off some alarming statistics facing the nation’s suburbs.

In the U.S. today there are: 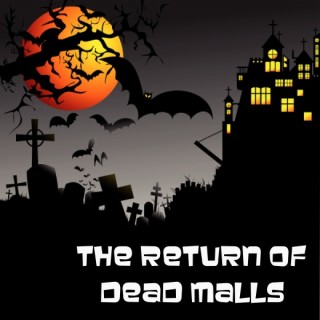 But to Dunham-Jones, instead of dead malls casting a permanent pall over suburban America, they present a great opportunity for creative reuse and (in some cases) can become better woven into an urban fabric — instead of standing in isolation, surrounded by acres of parking.

“Meds and Eds” — how dead malls can become home to medical facilities, educational institutions, and libraries. One place where this has happened is at Nashville, Tennessee’s One Hundred Oaks Mall, which had been half empty before being retrofitted. It’s been used to expand Vanderbilt Health. 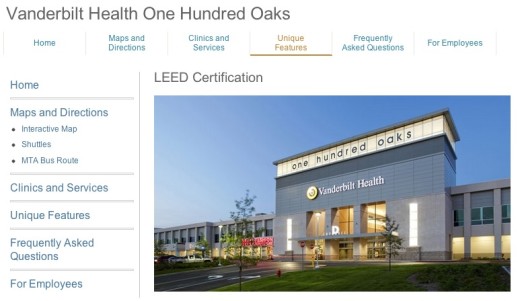 As Karen Talley reports: “The first Ubiquity initiative will involve a Sears store on Chicago’s south side, near the Chicago Skyway. The 127,000 square foot store is slated to close at the end of this month and be transformed into a multiple-tenant data storage site.

We seem to have a natural desire to want to know how our community stacks up to other communities. Look at all the Top 10 and Top 20 ranking lists — and how popular they seem to be with members of the public, and elected officials (unless you’re found in a “10 Worst Cities For … ” list!).

At the IMCL conference, Angela Russell talked about a ranking list she’s been involved. Called “County Health Rankings,” it’s a collaboration between the Robert Wood Johnson Foundation and the University of Wisconsin Population Health Institute (where Russell works). “Its focus,” she said, “is on how well counties are doing on a range of public health issues.”

Most counties in the U.S. are included in the rankings. As Russell explained, “We don’t create the data; we get it from sources then compile it into rankings. Rankings get a lot of media attention. Our goal is to enable people to use the data and engage with their community.”

She noted that even poor rankings can be useful. “Mayor Joe Reardon of Kansas City, Kansas, told us the County Helath Ranking were a call to action for Wyandotte County” (the county and city are a unified government).

The ranking system is based on four broad categories:

You can get more detail about the specific data on which the rankings are based from the County Health Rankings web site.

As Russell explained, the data measures used for the rankings have to be:

They also, she added, need to “reflect important aspects of public health that can be improved.”

Here are a couple of screenshot to give you a quick feel for the site. 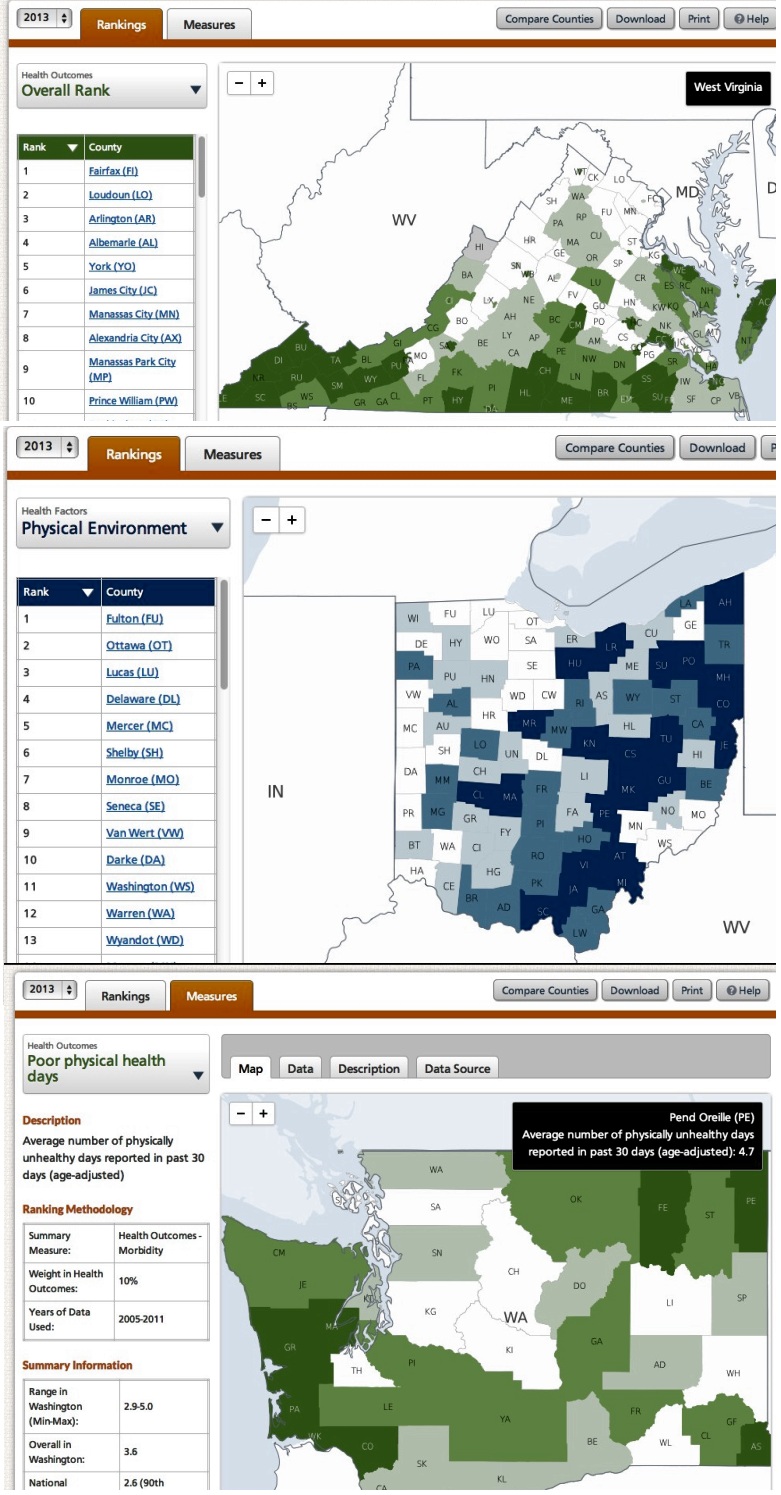 Try it out, and see how your own county and state stack up.

Do Your Neighbors Shape Your Behavior?

That was the question at the heart of a short, but interesting presentation by Thomas Macias, an Associate Professor of Sociology at the University of Vermont. We don’t often consider the fact that our neighbors can influence how we act, but data analyzed by Macias indicates that, at least on some issues, what our neighbors do — and what we learn from our conversations with them — can be influential.

Macias spoke of “relational social capital,” sociologist’s lingo for the connections we have with other people, and how these connections are used to gain information, resources, and influence.

Working with responses to questions from the national 2010 General Social Survey, 3 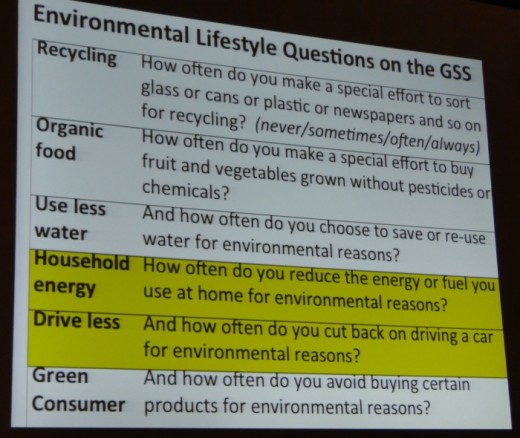 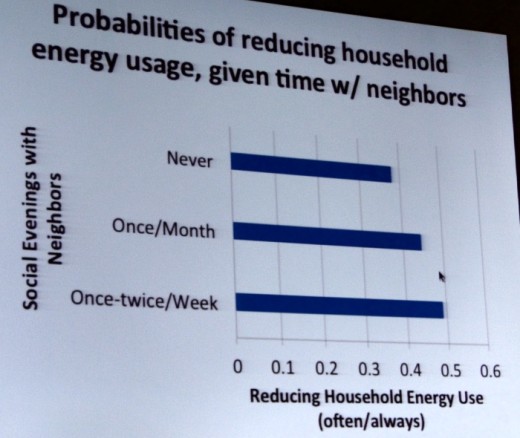 It’s not clear, Macias said, whether this result is due to peer pressure or gaining information about energy-saving practices used by one’s neighbors. As Macias told us, some research has found that where people visibly put their recycling out, there’s a greater likelihood that others will follow suit.

Suggestions for communities I started thinking about after hearing Macias’ talk: invest in bright, highly visible, recycling bins, and get some neighborhood coffee klatches going on sharing energy saving tips!