D is for Design, and for Darn Quick Approval

Portland has added a very interesting provision to its zoning ordinance. It’s called “Community Design Standards,” and it’s an option for developers in certain parts of the city — such as along commercial corridors.

The purpose of the Community Design Standards is to:

A. Ensure that new development enhances the character and livability of Portland’s neighborhoods;

B. Ensure that increased density in established neighborhoods makes a positive contribution to the area’s character;

C. Ensure the historic integrity of conservation landmarks and the compatibility of new development in conservation districts;

D. Enhance the character and environment for pedestrians in areas designated as design zones; and

E. Offer developers the opportunity to comply with specific objective standards as a more timely, cost effective, and more certain alternative to the design review and historic resource review process.

Did you catch the language in Section E? It’s probably the most significant aspect of the ordinance.

As Portland planner Radcliffe Dacanay told me during our walk, not only has the ordinance made it easier and quicker for developers to proceed, but it has led to some more exciting, creatively designed buildings (though, as he acknowledged, not always admired by neighborhood traditionalists).

While there are various caveats and exceptions, the basic idea is that if a developer of a relatively modest sized project (with under 20,000 square feet of floor area) chooses to meet the “Community Design Standards,” there’s no public review of the building design. You know: no controversial public hearing.

The Community Design Standards cover a broad range of building features: roofs; the main entrance to the building; vehicle areas; exterior finish materials of the building; architectural details; windows; and more, such as landscaping. They’re certainly quite detailed standards (just browse through their 31 pages). But — and this is a big but — they’re specific and well-defined. So a developer can avoid the often subjective, hard to predict, and time-consuming aspects of going through a public design review process.

One thing that you immediately notice in Portland (besides all the food trucks) is the presence of bike racks on sidewalks and bike corrals occupying what used to be parking spaces along many commercial corridors. That was certainly the case in walking down Division Street, and then back along Belmont Boulevard. 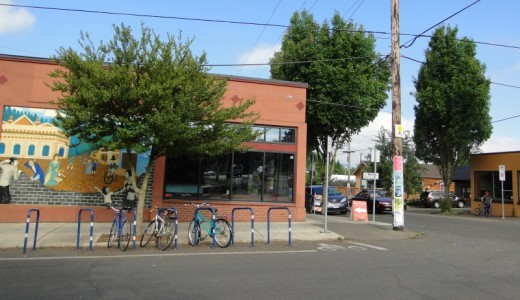 What’s made the bike racks and corrals so popular? In large part, of course, it’s because there’s a growing demand for bike parking spots from bicyclists. But the City has also make it easy for businesses to request the Portland Bureau of Transportation to install a bike rack in front of their business (if there’s room on the sidewalk) or to request a larger size “bike corral.” 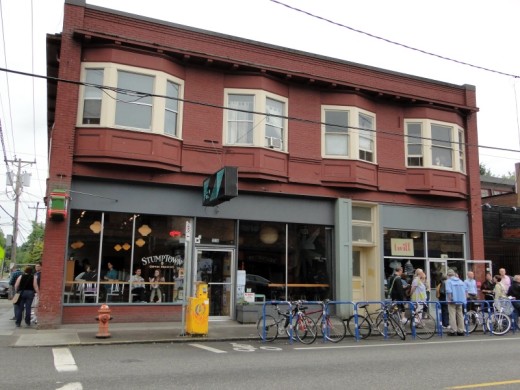 As the Transportation Department explains on its web page:

“Most of Portland’s bicycle parking is provided in bike racks on the sidewalk. However, in a growing number of commercial areas the high demand for bicycle parking is too much for the sidewalk. In other cases, local businesses simply prefer bicycles in the parking strip rather than autos in order to attract a customer base that is turning more to the bicycles for transportation. In all cases, corrals are installed at the express request or cooperation of the adjacent businesses.”

The City picks up the tab for installing the bike racks and corrals. It’s not surprising that many businesses have requested them (there are already 99 corrals installed). As the number of cyclists has increased, its become worth the loss of a parking space or two to provide the 12 to 24 spaces the corrals provide.

From the city’s perspective, the more bike corrals and racks, the easier it is for people to use their bikes for shopping errands, the less they’ll need to use their cars, the faster the city will meet its greenhouse emission reduction goals (see my previous post on these goals).

For more details about the bike corrals and the bike racks programs.

Take a look also at this very informative video by Streetfilms, in which Greg Raisman of the Portland Department of Transportation shows how bike corrals — and also bike oases — work. It’s not hard to see why they’ve become so popular.

One of the things that surprised me — especially given the heavy emphasis the city places on walkability — was the poor condition of quite a few sidewalks. What’s more, while the city’s walkability scoring system includes the presence of sidewalks as an important factor, it does not consider sidewalk condition. But is a sidewalk that some residents can’t navigate (especially older people or those using walkers or wheelchairs) really a walkable sidewalk? 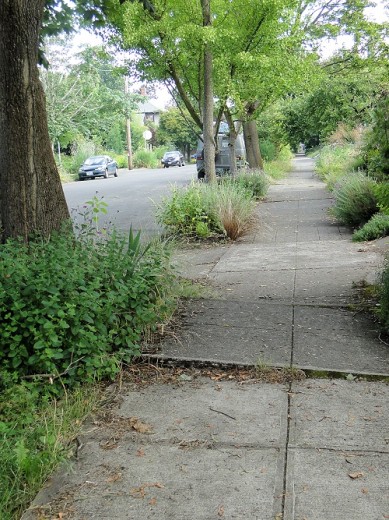 “Why didn’t the city do something?” I asked my walking companions.

Surprisingly to me, they said that sidewalk repair is not the city’s responsibility, at least not directly.

Instead, it’s up to the individual property owner to fix the sidewalk in front of their house if it needs to be repaired. If someone trips and falls, it’s a legal liability issue for the property owner — not for the city. Yup, take a look at the city ordinance. 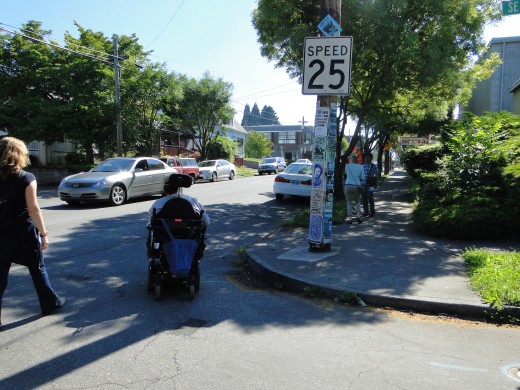 just a few minutes after our discussion we encountered a man using a powered wheelchair making his way up Division Street. He was cursing the rutted condition of the sidewalk as he was slowly moving along. Then he reached an intersection without a curb cut and had to scoot out into the roadway, asking us to help shield him from traffic.

Yes, I understand that with so many large trees, roots will cause sidewalks to crack or uplift. Yet still, I wonder how the city can put so much focus on walkability, but not have a sidewalk repair program. 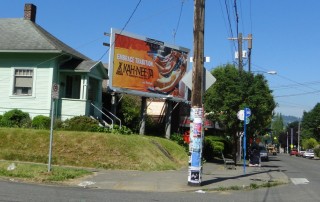 I don’t know if there’s a category for this, but sometimes it’s those odd, quirky elements of a neighborhood that can make it feel like a special place, with its own distinctive identity. 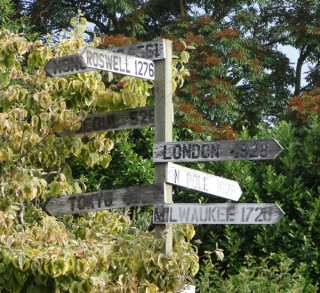 residential neighborhoods (I was told they’ve been “grandfathered” in) — but rather things like the “wayfinding” pole we walked by on SE Division Street; the “lending library” we passed on a residential block (especially valuable right now if you love Erich Segal); or the creative plantings on a driveway. 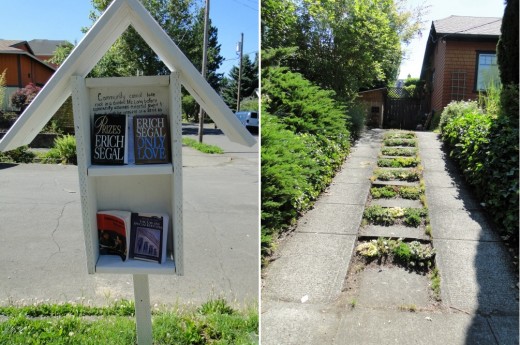 We’ll continue tomorrow with a brief look at another side of Portland.