Talking about the explosive growth in bike facilities across Portland yesterday, reminds me of something else that’s also seen explosive growth. I’m referring to food carts.

Food carts and trucks have a long history in many U.S. cities, including Portland. “Portland provided spaces for food carts as early as 1912, when Italian immigrant Joseph Gattoo sold produce door-to-door from a horse-drawn cart in Sellwood and Northwest Portland. Even then, carts served as stepping stones into storefront businesses.” 1

But that’s not to deny that food carts have seen an amazing renaissance across the country, as planner Beth Humstone reported for us last year in “Eating on the Go: Mobile Food Trucks.” 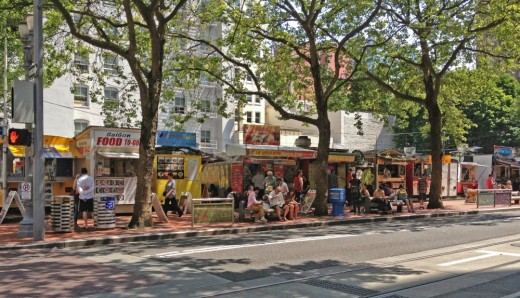 What a great way to hide a large surface parking lot! But there are also plenty of smaller “pods” of food trucks throughout the city. 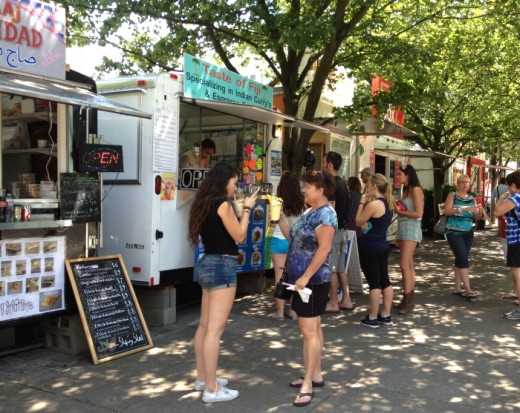 All told, there are now some 500 food carts in Portland. The food cart explosion is part of the creative, entrepreneurial dynamism that’s fueling Portland today.

What’s perhaps most amazing is that the city government, instead of throwing up barriers, has been listening to the needs of food cart owners.

Meet some of Portland’s food cart vendors in this enjoyable seven minute video from the Travel Channel:

When food carts are located on private property in Portland, as long as they keep their wheels on, they’re regulated as commercial vehicles — not as buildings. When located in the public right-of-way, city permits are required. 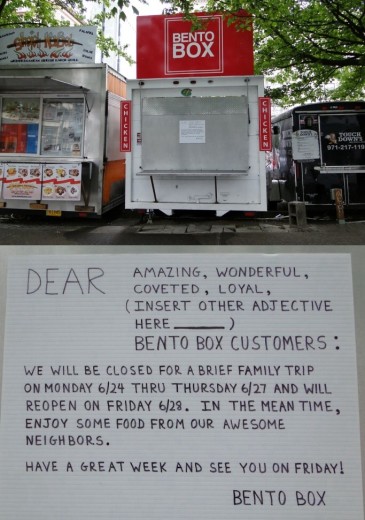 “Food Cartology,” a study jointly conducted by students at Portland State University and the Portland Bureau of Planning and Sustainability — with advice from a broad ranging advisory committee — found that:

“Food carts have signiﬁcant community beneﬁts to neighborhood livability by fostering social interactions, walkability, and by providing interim uses for vacant parcels. Additionally, carts provide good employment opportunities for immigrants and low-income individuals to begin their own businesses, although there are significant barriers to continued stability and success.”

The report’s bottom line: “The City’s support of the food cart industry can advance the key public values … and benefit all Portlanders.”

For me, the sights, sounds, and colors of the many food carts — plus the mix of scents wafting from them — add to the vibrancy of Portland. And that’s not to mention getting some good tasting, affordable meals from a wide variety of cuisines.

6. Power (Belongs) to the People

“People who live there have a right and expectation to be involved with the future of their own community; it’s not just what planners or developers want.” That’s what Portland Mayor Charlie Hales told us at the opening session of the International Making Cities Livable conference — and it stuck with me during the next ten days I spent in Portland.

Portland has a history of strong neighborhood activism. Professor Carl Abbott writes about this in his excellent book, Greater Portland: Urban Life and Landscape in the Pacific Northwest, discussing how neighborhoods were strengthened in the early 1970s with the formation of an “office of neighborhood associations” in City Hall.

As Abbott comments, “neighborhood associations remain important actors on local issues. They are independent bodies that receive city support staff and communication funds.” With formal recognition, he notes, they have a “seat at bureau and city council discussions of issues with neighborhood impact.”

I also highlighted how the nonprofit City Repair organization has worked with residents across the city to strengthen their neighborhoods — sometimes by painting residential intersections.

But there’s also a closer to home example, so to speak, that I want to mention. Long-time Planning Commissioners Journal (and now PlannersWeb) readers have enjoyed dozens of articles by Elaine Cogan. In case you weren’t aware, Elaine and her husband Arnold Cogan were founding principals of Cogan Owens and Cogan, one of the Pacific Northwest’s top land use planning firms.

Arnold played a key role in the formulation of Oregon’s pioneering land use laws. He was Oregon’s first planning coordinator under Governor Tom McCall, and first director of the state Department of Land Conservation and Development. Arnold has worked on a broad range of planning studies and projects in Oregon and elsewhere. (He was also recently honored by being a keynote speaker at the Oregon APA chapter’s “40th anniversary celebration” of enactment of Senate Bill 100, Oregon’s landmark land use law).

Elaine — who sometimes has to remind me that she’s not a planner — has focused her career on public involvement and communications strategies. She’s managed, and moderated, countless public meetings — drawing on the breadth of her experience for the suggestions she’s provided to our readers. It’s in large measure due to the talents of Elaine, Arnold, and others like them, that Portland has embraced community involvement as something planners and local officials should welcome and seek to encourage, not as something to just get through because it has to be done.

I also asked Elaine to share some of her thoughts about public involvement in Portland. Here’s part of what she told me:

“We are a state accustomed to involving the public in most decisions and by reference, Portland, our largest city, is its flag-bearer. … Genuine engagement with the public requires commitment, perseverance, time and money. Each is very important. First of all, it is commitment to the process, not the end product that gains the confidence of the public and encourages them to participate. It takes considerable time and effort and is not inexpensive to ferret out all the interests who want to or should be engaged and give them the means to have their say, often influencing the ultimate result.”

Elaine also described a project she’s recently worked on: replacement of the Sellwood Bridge connecting southwest Portland with a well established neighborhood and an adjacent county on the east side of the Willamette River. As she noted:

“Most agreed the bridge was old and sadly in need of replacement. Still, there were many points of view about what to do abut it. With a commitment to genuine engagement, it took many months for the public agency and its consultants to find and engage all the interested and affected parties …

With a concentrated effort led by a 27-member citizens group that represented all these interests and combined social networking tools with the expected interest group and public meetings, newsletter updates, media, publicity, etc. we engaged all these folks and more. The bridge opening next year will be a workable compromise and a genuine cause for community celebration.”

For more on food trucks see: