One of the key themes that cut across many sessions at the International Making Cities Livable Conference in Portland was climate change — and the need to achieve substantial reductions in greenhouse gas emissions.

But I was still taken aback when Rex Burkholder — an elected member of Metro, the regional governing body — told us that the City of Portland and Multnomah County have agreed to reduce carbon emissions by 40 percent by 2030, and by 80 percent by 2050. That’s quite a cut!

Achieving emission reduction goals of this magnitude, Burkholder pointed out, requires a regional approach. Fortunately for the Portland area, it has one of the strongest regional planning and transportation agencies in the nation: Metro.

Some background about Metro:

First of all, Metro serves as the metropolitan planning organization (MPO) for a region that includes three counties and 25 cities, with a population just under two million. This means it plays the lead role in transportation planning, and in allocating funds for transportation-related investments.

OK, that’s not so unusual. However, the fact that Metro’s councilors are elected is very unusual, and seems to have added to the agency’s clout. What’s more, Metro is responsible for regional land use planning — including the critically important task of setting the region’s “urban growth boundary.” In other words, its core mission includes both land use and transportation planning.

“Metro’s powers derive from a citizen initiative that gave it home rule powers, including the responsibility to develop a “Future Vision” and regional plan with a 50 year horizon, along with the authority to require changes to city and county comprehensive plans to implement this plan. Policies get developed collaboratively with leaders from the region, but must comply with the goals and objectives of the regional plan.”

“In 1990, Metro began work on the 2040 Growth Concept, identifying regional centers and transportation corridors in which to encourage high-density, mixed-use development. …

Between 2008 and 2035, Metro will invest $1.5 billion towards spurring development in these vital areas … [these] investments are projected to reduce average travel distances by 5 percent, reduce the average infrastructure needed to build a dwelling unit by 7 percent, and increase the region’s population density by 8 percent.” 1

Burkholder and Jessica Atwater (who co-presented with Burkholder) noted that since 1994 average vehicle miles traveled in the region have decreased from 21.1 to 17.1 miles per day; while transit mode share has increased from 2.9 to 4.2 percent.

While those numbers might not seem dramatic, they really are — especially compared to national averages. Focusing on transportation is also critically important, since that sector accounts for 40 percent of carbon emissions countywide. But, as Burkholder acknowledged, there will be a need for even more substantial changes if the region is to meet its greenhouse gas emission reduction goals. 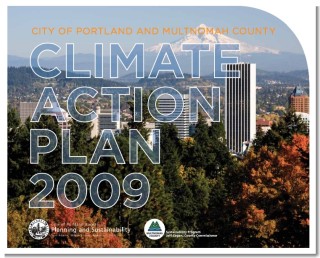 In 2007, both the Portland City Council and the Multnomah County Board of Commissioners adopted resolutions directing staff to design a strategy to reduce local carbon emissions 80 percent by 2050 … with an interim goal of a 40 percent reduction in emissions by 2030. This, in turn, led to preparation and adoption of the City of Portland – Multnomah County Climate Action Plan in 2009.

A wide range of objectives for achieving these goals are incorporated into the 2009 Climate Action Plan. To highlight just a few of them: 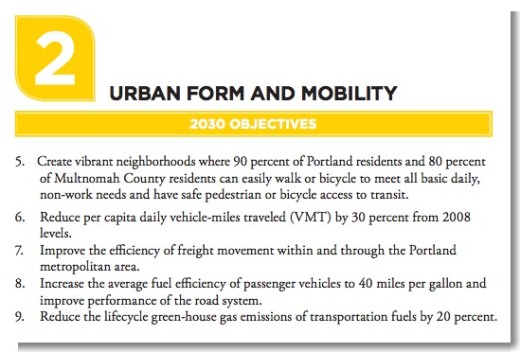 The Plan, not surprisingly, also casts these objectives in a positive light:

“Many actions to reduce carbon emissions are likely to have strongly beneficial impacts on personal health. People who increase their walking and bicycling will experience direct positive benefits, and better air quality will benefit everyone who lives in, works in or visits the Portland region.”

We’ll focus more on the connection between public health, walkability, and our built environment in several posts over the coming weeks.

Interestingly, Rex Burkholder’s take on density was quite similar to what I heard from Portland planners when they explained the city’s 20-minute neighborhoods concept to me.

While people often say they don’t want higher density in their community, they also say they want the benefits — in terms of nearby stores and services they can walk to — that are only possible with higher density.

Burkholder gave an example of this. He said that people often mention to him how great it would be to have a grocery like Trader Joe’s (the rapidly growing food chain) in their neighborhood. But Trader Joe’s officials say they typically need to have 3,000 people living within a mile of their store. After hearing this, “the same people who opposed density rethink their position about having apartments and other high density housing nearby.”