First important thing to know: Orenco Station is both an actual light-rail station and the name of a 209 acre “transit-oriented” development adjacent to the station.

They’re both in Hillsboro, Oregon, a fast growing suburb of Portland, and home to the state’s “Silicon Forest.”

You know Orenco Station — the development, that is — is important, first of all, because there’s a detailed Wikipedia entry about it (not many developments can boast that!).

More importantly, Orenco Station has been one of the pioneering large-scale transit-oriented developments in the United States, and a key model for how to get people living in suburbs to drive less, and walk and use transit more.

Some additional facts about Orenco Station, as Colin Cooper, AICP, Hillsboro’s Assistant Planning Director told me, and as described in several articles by Michael Mehaffy, an urban designer who served as project manager for Orenco Station:

1. “When funding for the Westside MAX light rail was approved, Portland’s METRO regional government committed to creating new residential developments along the line, to provide a greater density of light rail users in the new corridor. MAX was extended into the existing high tech industrial area of Hillsboro, and on into the center of the town of Hillsboro.” 1

2. “The site of Orenco was a greenfield site along the [light rail] line, between downtown Portland and downtown Hillsboro, and surrounded by thousands of high tech jobs but very little housing. Metro believed that it was critical to improve the mix of housing to jobs in this region between Portland and Hillsboro.” 2

3. “Intel’s largest global facility (the Ronler Acres campus) is located adjacent to the Orenco Station development. It currently employs around 10,000 employees, but should grow to 17,000 in near future when the D1X fabrication plant comes online. It will add 2.5 million square feet, and represents a $6 billion investment by Intel.”  3

4. “In Orenco Station there is a pedestrian axis to the light rail station, around which a grid of alley-loaded ‘skinny streets’ extends; a walkable town center of mixed-use shops, services and residential; ‘liner’ buildings with limited on-street parking and lots tucked behind;

a range of housing types and prices, from $79,000 to over $500,000, as well as rental units; pedestrian-friendly street design and scale; ‘granny flats’ and live/work units; loft units above retail; and of course, much higher density than is typical for the American suburbs, up to 25 units to the acre.” 4 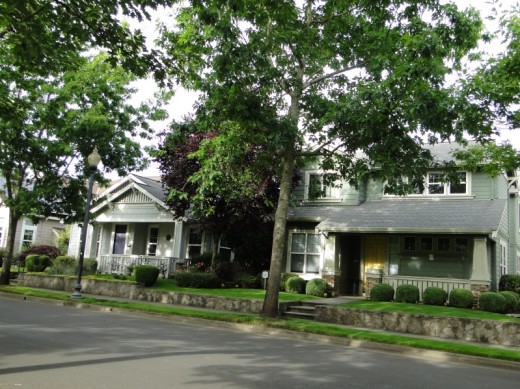 5. “Orenco Station has steadily expanded since its first phase opened in 1997. The second generation of the development was at higher density (40 dwelling units/ acre) than the first. Parts of the [coming] third generation, will include six-story buildings at a density of 100 units/acres.” 5

6. “There are currently 1,800 units of housing at Orenco Station; the third generation of development will add 1,200 more; this will include 150 units of affordable housing to be built close to the light-rail station.” 6

How Well Has Orenco Station Done as a Transit-Oriented Development?

Again, let’s remember that one of the key aims of a TOD is to reduce auto usage and get more people on transit.

There’s been one detailed survey of Orenco residents — done by Bruce Podobnik, an Associate Professor of Sociology at Lewis and Clark College in Portland — “Assessing the Social and Environmental Achievements of New Urbanism: Evidence from Portland, Oregon.”

Podobnik looked at transit use, walking, and indicators of resident satisfaction. Here are some of his key findings on transit use and walking from his 2007 report. You can download a conference presentation draft of his report for much more detail:

Podobnik conducted two surveys in Orenco Station — one in 2002, just five years after the first phase of the development had opened, the other in 2007 after more build out had occurred, including the Town Center with stores and a grocery. Not surprisingly, walking to stores and shops increased significantly, from 11 percent in 2002 to the 50 percent mark noted above.

Some have found Podonik’s results an indication that Orenco Station has only partially succeeded in its goal of making a significant dent in commuting by car. 7

In response, Michael Mehaffy has pointed out that many of those living at Orenco Station work at the nearby Intel facility (how many appears to be unknown), just a short one mile drive away (apparently, it’s difficult to walk to work at this mega-sized plant).

Mehaffy also notes that Podonik’s study shows that “36 percent [of Orenco residents] use transit, bike, carpool or bus, or some other combination. That’s still not great, but far better than the U.S. average of 23.6 percent. And the numbers in Orenco Station are getting better with time.” 8

But Mehaffy also acknowledges that “it was also an unhappy fact of history that the station location was eccentric to the community and removed from the major arterial that bisects the site.”  9

In spending a couple of hours walking through Orenco Station, a couple of things struck me:

Yes, as Mehaffy indicates, the light-rail station is not really in the most central location — and might have drawn more ridership if it were close to the Town Center, which really does seem to be at the heart of the development. But much of the remaining high-density build out will be located closer to the station — and my guess is that transit ridership rates will increase. 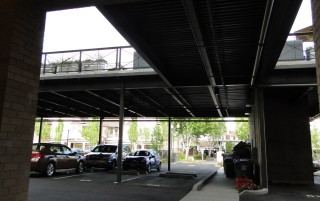 There’s plenty of parking readily available throughout the development. Homeowner have garages (albeit tucked off of alleyways and not in the front of the house) and those living in apartments have underground parking.

Orenco Station is far from being a “car free” environment — and would probably make little sense (and be unmarketable) as one. It’s likely that most people in a suburb like Hillsboro would still want to have a car, even if they didn’t use it nearly as much as they would if living in a more typical suburban development (as, in fact, Podonik’s survey results indicate).

Orenco also provides a visually pleasing, and very walkable environment. The design of most buildings is good, if not outstanding. There are plenty of sidewalks; a large “Central Park;”

and lots of stores and shops within the development — many on the ground floor of mixed-use buildings. Over the years, as tree plantings mature and the development fills out, it should become an even more attractive place to live. 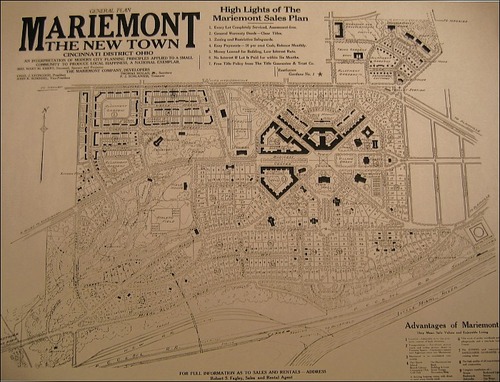 Orenco Station reminded me, in several ways, of Mariemont, Ohio, a 1920s planned village just a few miles east of Cincinnati. Based on an English village model, Mariemont provides an integrated mix of apartments, single-family houses, commercial buildings, boulevards, and parks — all in a compact, walkable layout.

Many residents move from apartment or small house to a larger place within Mariemont over the course of time — sometimes making several moves up the housing “ladder.” This attests to the value of providing a wide mix of housing types within the village — something that Orenco Station also provides. Take a look at my report about Mariemont.

Given the constraints of the urban growth boundary, coupled with both the rapidly growing employment base in Portland’s western suburbs and the region’s commitment to making substantial cuts in greenhouse gas emissions, there’s really little alternative to high-density suburban developments like Orenco Station.

What’s more — and I forgot to mention this earlier — Orenco Station residents very much like where they’re living. 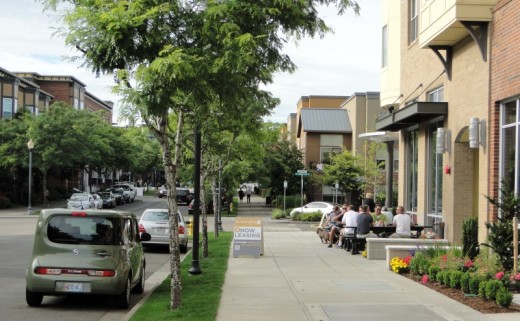 As Professor Podobnik notes, “the extremely high satisfaction ratings given by Orenco residents to their community’s physical design suggests that high-density developments are quite capable of competing in an urban area that is dominated by more traditional, diffuse suburban neighborhoods.” 10

Mmm. perhaps high-density development is not that scary a proposition for at least some suburbanites.

Yes, there are tree huggers in the suburbs, and I found some of them at Orenco Station.

Right after I got off the MAX train, I saw a group of people off to the right surrounding some very large oak trees. At first I thought it might be some pantheistic religious group. But when I got up close, I heard that they were talking about the fate of those very trees they were standing under.

It appears that the next phase of development at Orenco Station will be close to where these oaks are located. While the development will include a park and plaza area, there’s still the likelihood that the trees will be put at higher risk (apparently, they already have significant health issues).

The Hillsboro Parks & Recreation Department retained several tree experts for advice. For those of you who are also tree huggers — or are just interested in the fate of these oak trees — you can download the tree experts’ report (pdf).

The ABC’s of TOD: Transit-Oriented Development