One of the most remarkable aspects of Oregon planning law is the “urban growth boundary” (UGB). We’ve reported before about the use of UGBs (see Beth Humstone’s “Building Invisible Walls“) but actually visiting the Portland metro area and having the chance to drive across several of its suburbs, hammered home the dramatic impact — at least visually — these lines on a map can have.

You’re driving along past new developments and then, in what seems like an instant, you’re driving past farmland that stretches far out towards the distant mountains. 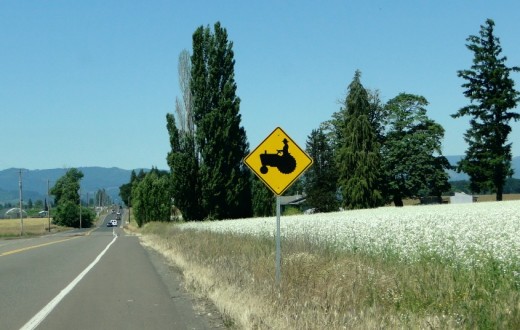 You’re outside the urban growth boundary.

Some brief history about the UGBs from The Oregon Encyclopedia:

“Oregon’s system of land-use regulation was enacted by Senate Bill 100 on May 2, 1973. The legislation was championed by Republican Governor Tom McCall; State Senator Hector Macpherson, a dairy farmer in the Willamette Valley; and a coalition of progressive, urban, and agricultural interests. … the bill created the state Department of Land Conservation and Development (DLCD) and within it the seven-member Land Conservation and Development Commission (LCDC).

Under the system, cities are required to submit their proposed UGBs to the LCDC and to justify them according to “19 Statewide Planning Goals,” which include preservation of highest-quality agricultural lands and conservation of forests and open space. The goals also aim to develop high-quality, livable cities and towns by increasing density, improving public transit options, and encouraging affordable housing close to jobs.

In 1979, a regional government, Metro, was created by Portland-area voters. One of its responsibilities is to manage the UGB in the three-county metropolis (Multnomah, Clackamas, and Washington). Metro is one of some 240 UGB jurisdictions in the state. These urban zones are required to adjust their UGBs every five years to maintain a ‘twenty-year supply’ of land that can be developed.”

Here’s more about the rationale behind the UGB, as provided by Metro:

“The boundary controls urban expansion onto farm and forest lands. Land inside the urban growth boundary supports urban services such as roads, water and sewer systems, parks, schools and fire and police protection that create thriving places to live, work and play. The urban growth boundary is one of the tools used to protect farms and forests from urban sprawl and to promote the efficient use of land, public facilities and services inside the boundary.

Other benefits of the boundary include:

Instead of building roads further and further out as happens in urban “sprawl,” money can be spent to make existing roads, transit service and other services more efficient.”

Is Oregon’s land use planning program, with its urban growth boundaries, a top-down process, designed by bureaucrats isolated from the public?

Not so, Metro council member Rex Burkholder told me (you might recall Burkholder’s name from an earlier post on greenhouse gas emission reductions). “The very first goal of Oregon’s land use planning goals and guidelines relates to citizen involvement.” Goal One calls for “ensuring the opportunity for citizens to be involved in all phases of the planning process.”

Those words mean something, Burkholder continued, “I believe that the success — and continued existence of the whole program — is due to the expectation that citizens are part of all planning. This has has additional positive impacts by creating a culture where citizen engagement is expected — by bureaucrats and politicians as much as by citizens — in all aspects of governing.”

I’m embedding two short videos below that may help fill in your understanding of the UGB — and some of the issues it raises. The first video primarily focuses on the UGB’s benefits in strengthening the agricultural and forestry sectors of the economy — largely by reducing speculative pressures on land, which can hasten the conversion of farmland into residential or other development. It features comments by Jim Johnson, a land use specialist with the Oregon Department of Agriculture.

The second video, produced by the Lincoln Institute of Land Policy and Northern Light Productions, looks more broadly at the use of the UGB, and offers some interesting perspectives.

Impact of the UGB on Housing Prices

Perhaps the most controversial aspect of the urban growth boundary is its impact on housing prices. I don’t know enough to provide my own opinion on this, but you can these read two non-academic commentaries to get a taste of the debate. See “Urban Growth Boundaries,” on the National Association of Homebuilders web site,  and “The urban growth boundary and homebuilder humble pie,” on the Portland Architecture Blog.

When to “Loosen the Belt”?

The sense I got from talking with Hillsboro Assistant Planning Director Colin Cooper, AICP, is that the urban growth boundary has been a mixed blessing for the city. On the one hand, it hems in Hillsboro on three sides, with part of the UGB just a few blocks west of the community’s downtown (see map on left). On the other hand, Cooper noted that the UGB has helped preserve some of the most productive farmland in the entire Willamette Valley.

It’s important to remember that the UGB is not a fixed line; every five years the boundary is reviewed, with the possibility of “loosening the belt” by increasing the amount of land within the boundary. During the last review two years ago, for example, Metro voted to move 1,985 acres from outside to inside the growth boundary, all but 330 acres for residential development.

According to Metro, “Since the late 1970s, the boundary has been moved about three dozen times. Most of those moves were small — 20 acres or less. There have been other times when the Metro Council approved larger additions … [including] 18,867 acres in 2002.”

Placing all this in context, the current Portland metro UGB encompasses 257,645 acres (some 400 square miles).

Not surprisingly, there appears to be a regular debate in the Portland metro area whenever UGB expansions are considered — over both the size and locations of the proposed expansions.

One fairly recent and positive change, according to Cooper, is the fact that the legislature in 2007 enabled the Portland metro area to develop a system of “urban reserves” and “rural reserves” — identifying areas outside the UGB where growth is planned over a 40 to 50 year time horizon (urban reserves), and, correspondingly, where land should not be developed long-term (rural reserves) — that is to say, 20 to 30 years beyond the UGB’s current 20 year projections.

Here are the definitions contained in the law, also referred to as Senate Bill 1011:

SECTION 1. As used in sections 1 to 4 of this 2007 Act:
(1) “Rural reserve” means land reserved to provide long-term protection for agriculture, forestry or important natural landscape features that limit urban development or help define appropriate natural boundaries of urbanization, including plant, fish and wildlife habitat, steep slopes and floodplains.
(2) “Urban reserve” means lands outside an urban growth boundary that will provide for:
(a) Future expansion over a long-term period; and
(b) The cost-effective provision of public facilities and services within the area when the lands are included within the urban growth boundary.

As Cooper explained, this very long-range planning should make future expansions of the Portland metro area’s UGB more predictable and less contentious since everyone will know quite far into the future where expansions of the boundary are most likely to occur.

For an overview of Senate Bill 1011 provided by Metro.

Metro councilor Burkholder also noted that the urban growth boundary is designed to work in conjunction with increasing density within the boundary — something achieved through local zoning. That’s clearly happened in Hillsboro’s huge mixed-use Orenco Station development, the focus of our next post tomorrow.

Portland’s urban growth boundary — and those used around smaller cities throughout Oregon — seem to be fairly widely accepted, if not uniformly loved (as you saw in the Lincoln Land Institute video). Perhaps the best evidence of this is the fact that the state law requiring urban growth boundaries been in place for some 40 years now. What’s more, the UGBs seem to be working — at least as intended by the legislature. The debate nowadays, as noted, appears more focused on when and where to expand a UGB.

The urban growth boundary has even become something of a cultural icon 3 for Oregon, helping characterize the state’s green, “we’re actually doing something to preserve farmland and forests” persona.

So why have so few urban growth boundaries been adopted by metro areas across the United States, and none — besides Oregon — on a statewide basis? Are we dense to the benefits of this approach to growth management?

I’ll leave it to you to speculate about that.