3. Transportation and Land Use

Over the years, we’ve published a number of articles highlighting the important link between land use and transportation planning. That’s something that’s very well understood in the Portland metro area.

Interestingly, what seems to be powering this linkage in Portland is an environmental issue: how to reduce greenhouse gas emissions to slow down global warming (aka, climate change).

As I reported in earlier posts (Wow, That’s Quite a Cut! and Distance, Destinations, Density), the Portland metro area has set very ambitious goals which would dramatically reduce greenhouse gas emissions over the coming decades. Meeting these goals requires a major change in our transportation patterns — more technically speaking, reducing vehicle mode share, while increasing mode share for transit, bicycling, and walking.

What’s strange, in a way, is that these challenging goals, instead of being a damper on economic growth, are actually strengthening the region’s economy.

You may recall both from my conversation with Nancy Hales of First Portland, and my report on Portland planning director Susan Anderson’s talk, that each highlighted how Portland and the metro area has embraced the rapidly emerging “green economy” — and has already benefited from this with new and expanding business opportunities. 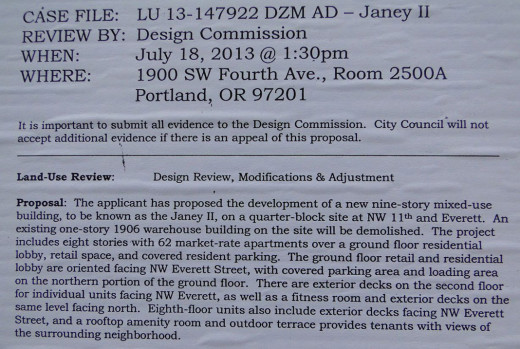 Portland’s streetcar line has helped fuel redevelopment in “the Pearl,” the city’s old warehouse district. The same is also happening in the city’s South Waterfront district. TriMet’s MAX light rail network has also helped support the growth of the “Silicon Forest” hub of technology in the region’s western suburbs (see my earlier post on Hillsboro’s Orenco Station development and its relation to Intel’s huge fabrication facility).

Yes, transit investments are costly. But so are building highways. Which is the better long term bet?

Yesterday, when talking about water and Portland, I briefly mentioned what led to the creation of Portland’s waterfront park. But it’s worth expanding on this a bit, as Portland has been one of the earliest cities to move towards the “end of the freeway” era. As Oregon-based editor and writer Sarah Mirk explains in Portland’s Dead Freeways:

“In 1943, Portland invited … urban planner Robert Moses to visit the Rose City and write its road construction plan. … His team holed up in a downtown hotel and whipped up an 86-page blueprint of Portland’s future, including our five current freeways plus freeways slicing throughout Laurelhurst, Sellwood and up Division.” 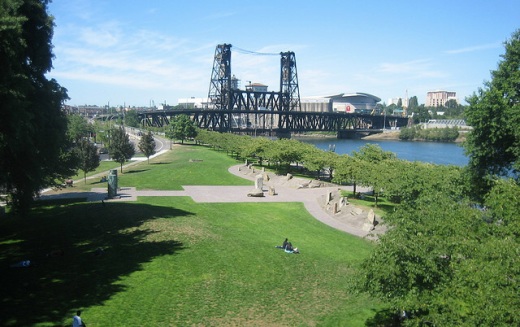 Then fast forward 25 years “when the state began buying up land to expand Harbor Drive [freeway] in 1968, Portlanders organized protest politics on the waterfront’s small strip of grass. Traffic engineers said closing the freeway would be a disaster, but citizens found open ears at City Hall and the Governor’s Office. They agreed Harbor Drive’s traffic could be rerouted to other freeways. In 1972, the 30-year old road was ripped out and replaced with a park.”

Portland and the Metro regional government have been national leaders in making the switchover from a roadway-oriented to a transit and alternative modes approach. With transit line extensions, Portland continues to take the approach that, “if you build it, they will come.” So far, ridership and new development along transit lines have, in fact, followed.

The region’s extensive and growing bicycle network has also both created demand, and responded to demand.

Take a look at this amazing three minute video by StreetFilms of rush hour over the Hawthorne Bridge — which connects Portland’s east side neighborhoods with downtown.