Those are the words recently retired Bath, Maine, planning director Jim Upham used to describe what it’s like to plan in Bath.

Bath is just nine square miles in size, with a population a little under 9,000, bordering the Kennebec River.

As Upham explained to a group of about a dozen visiting planners, “the city as it is today was almost completely built out before the advent of the automobile … this is what makes it so compact and walkable.”

During his years as planning director (from 1996 till last September), Upham told us, there was relatively little new development in Bath. This allowed him to focus on planning, and not face the pressures of constant development review.

As Andrew Deci, who replaced Upham as planning director, added, “One of our job as planners here is what I’d call ‘nominal maintenance’ — keeping things from getting messed up.”

At the center of Bath is a compact, thriving downtown.

In walking up and down Front Street, one can’t help being impressed by the variety of retail establishments, and how well-maintained the storefronts are.

As Upham explained, there’s a bit of good luck behind this. It comes in the form of one family — the Morses — that owns about one-third of the buildings downtown. 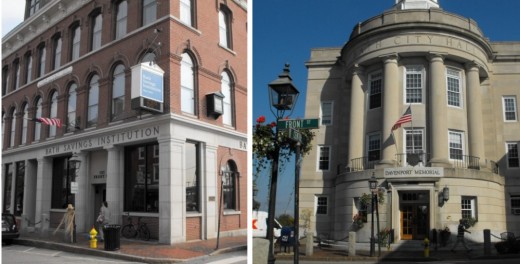 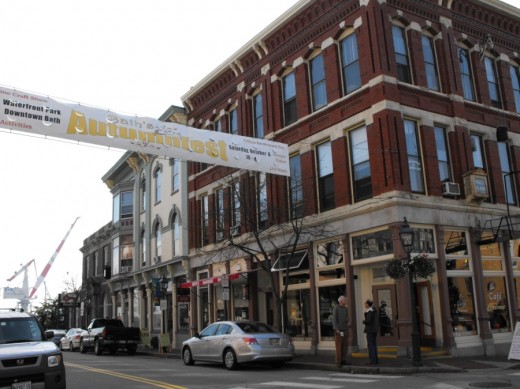 Joshua Moore in a 2010 article in Down East Magazine (“City of Surprises”) focused on this. As Moore reported:

“In recent years, perhaps no one in Bath has been more central to the cultivation of the city’s unique economic mix than Jane Morse. Her family’s Sagadahock Real Estate Association owns eighteen downtown buildings, most of them on Front Street (the street includes thirty-one buildings total).”

As Moore describes, Jane Morse is able to “pick and choose tenants” to get a good mix for downtown, not unlike a shopping mall manager. Morse told Moore “I get tired of the homogenization of America … you can go anywhere and get the same thing. I just don’t like that vision of America.”

Upham’s shorthand for describing the city: “Bath is real.”

Coincidentally, just before arriving in Bath, participants at the Northern New England planning conference had listened to Ed McMahon’s keynote presentation. McMahon is a senior analyst at the Urban Land Institute. One of his central points: the importance of having a distinctive community identity. As McMahon noted, more and more people and businesses are seeing that “sameness is not a plus, it’s a minus” (see my full post about McMahon’s remarks).

Take a look at the short video we’ve inserted below, prepared by Main Street Bath — and notice what it focuses on.

So what are the ingredients that make Bath “real” and “distinctive”? In walking through downtown, and then visiting a few neighborhoods, a couple of things struck me:

— Obviously, the Bath Iron Works (BIW) shipyard is the most distinctive aspect of Bath — both visually and economically. I spoke about it last week. But it’s far from the only thing that makes Bath stand out.

— The city cherishes and honors its history. From the panels and markers that dot the downtown, to the “City of Ships” paintings that line an archway through a Front Street building (more on this below).

— A waterfront along the Kennebec River the City has invested in, and made into a place that invites people of all ages to stroll or just hang out. 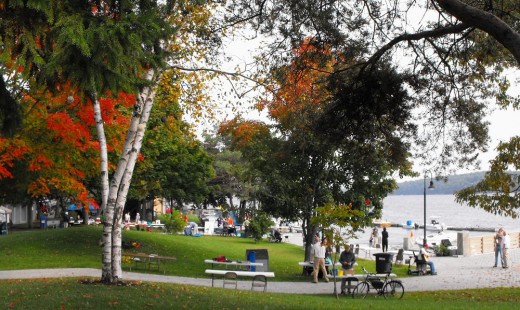 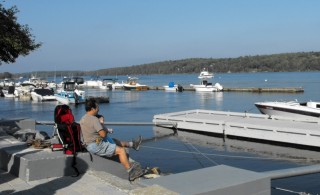 — Small urban features and details like the downtown archway smack in the middle of Front Street. Apparently also known locally as “the wind tunnel,” it’s a wonderful place to walk through (at least not on a windy day!). 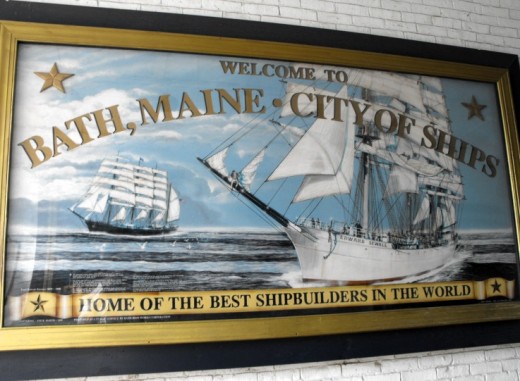 — There’s an emphasis in Bath on what’s local. You see it not just in what Jane Morse has done, but in the fact that the downtown grocery is locally owned, and that the coffee shop you’ll find at the main downtown intersection is the Café Creme, not a — we’ll you probably know that national “coffee house” I have in mind (which, by the way, I’m glad to stop at if there’s not a good local alternative).

— There’s a wide range of housing. You’ll find magnificent houses close by much more affordable dwellings. For example, High Street is lined with houses like the one immediately below.

But turn the corner, and as you head down towards the shipyard, you’ll see neighborhood blocks like those in the next photo. 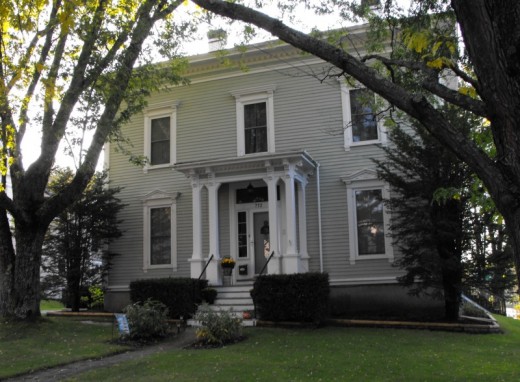 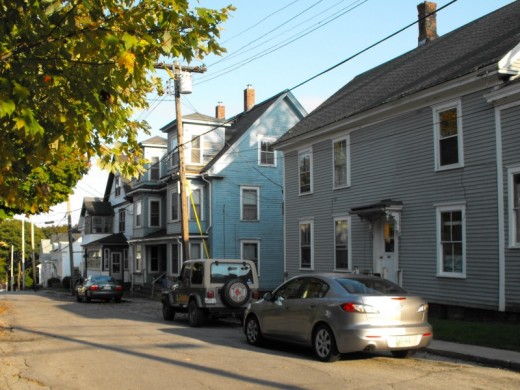 While having a range of housing options may not make Bath distinctive, without it, the city wouldn’t be the kind of “real” community Jim Upham described.

The same can be said for one final ingredient that I’ll talk more about next week — the people who make up this place.

Ed McMahon’s The Place Making Dividend (why fostering a sense of place is key to having a strong, economically vibrant city or town).

Scan through summaries of nearly two dozen articles published in the Planning Comm’rs Journal on downtown development (full text of these articles is available to PlannersWeb members).