In part I, we discussed what led to interest in developing a downtown center in the university town of Mansfield/Storrs, Connecticut. We continue now with a look at how the town, university, and a private developer worked together to make it happen.

Putting It All Together

For a small town it was a challenge to move forward on the kind of large project both local residents and university officials had in mind. In a community like ours, said Mansfield Town Manager Matthew Hart, “you really need a P3” — that is, a public-private partnership.

A ten-year long planning process ensued. Through economic ups and (more recently) downs, the project slowly moved forward. Public engagement was important — a cause led by the Downtown Partnership and involving many local, citizen-based committees.

The choice for where to locate Storrs Center was clear — adjoining University of Connecticut’s main campus right on Main Street, close to town hall, the community center, and the regional high school. It’s about a 41 acre site, only 17 acres of which will be developed, the remaining 24 acres preserved as open space.

Equally important, most of the project site is on University-owned land — greatly facilitating the project (especially as the Town decided not to use eminent domain to acquire any land — you’ll notice one “gap” along Main Street, where landowners’ decided not to sell their property. The project is simply being designed around this).

But the key event was the Town’s selection of Leyland Alliance as the project developer. Louis Marquet, a principal with Leyland, said his firm was impressed by the strong effort of the Town “to bring the public into this project.” In turn, Leyland staff met with various citizens groups to see how to enhance the vision — “and be realistic about what was achievable on the ground.” As Marquet added, “we were there to implement their vision — in a financially responsible way.”

“As the project evolved, people became more comfortable with us,” said Marquet — and that was important because “we were asking for a lot of approvals up front through approval of the master plan.” As the project developer, this was essential to avoiding costly project delays down the line if local approvals were to be needed building by building. Instead, “we had a whole project to move forward with.”

Matthew Hart agreed. “When an individual building comes in, it will be more of an administrative review by planning office — instead of needing a special permit. As Hart explained, “the Town also adopted a Special Design District to streamline permitting.” (Leyland worked with design committee from the Downtown Partnership, meeting nearly 30 times to help draft the design guidelines).

In addition, the Town took on the responsibility for constructing needed infrastructure — including a new garage and intermodal transportation center; streetscape improvements; and a town square. All told, this will come to $25 million for the first phase — but aided significantly by a $4.9 DOT grant for the garage/intermodal center (which will serve as a hub for campus, regional, and interstate bus service, and also house bike storage and lockers).

Another important decision by the Town was to retain the services of Shuprotim Bhuamik, a partner with HR&A Advisors, a real estate and economic development consulting firm. As Bhuamik explained, “We were called in by the Town. They asked us to figure out if public investment was, in fact, warranted. Then, if yes, what was right amount to put into the project. Finally, what would be the return on investment.”

Hart added, “the concept is that we [the Town] would finance the project using revenues derived from the project. My goal was to protect the integrity of the grand list.”

The University, which owns most of the project site, is committed to selling different portions of the site to the developer as the project moves forward — while relocating University uses within the project site. UConn will also provide water and sewer services (as it’s the provider of these services to the community).

One Step at a Time

Both Hart, Marquet, and Bhuamik agreed that an important decision was to break the project into phases. That both increased everyone’s comfort level, and reduced the financial risk.

Phase 1A — now under construction, will result in 27,000 square feet of commercial space, almost all already filled, plus 127 market rate apartments (fully leased), plus the 660 space garage.

Phase 1B — scheduled for completion next August, will include the intermodal center and more housing. 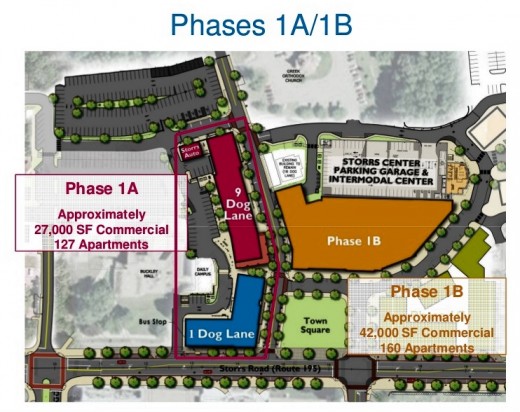 Private investment in the first phase will total $62 million (and, as I noted, with the public investment being about $25 million).

For Cynthia van Zelm of the Downtown Partnership, the project has been able to move forward “because we built a consensus in the community.” That meant “lots of neighborhood and civic group meetings.” As van Zelm added: “We also provide a monthly open house; send out a monthly email update; and have a construction blog — and we hold lots of events, to bring people together.”

Some other tips from the Storrs Center participants:

As Leyland’s Marquet added, “Candor was what was really important. When we negotiate it’s like we’re all on the same side of the table — and it’s the problem we’re dealing with that’s on the other side.”

— Use an RFQ, not an RFP. That’s what the Town decided on. Marquet pointed out that communities using an Request for Proposals (RFP) process for major projects like this “create an adversarial posture from the start. When it’s an RFQ (Request for Qualifications), we’re implementing the town’s vision — not the other way around.”

Financial consultant Shuprotim agreed, advising also to “choose the developer you’ll be working with not based on financial terms, but on how likely it is they’ll be able to complete the project.”

— Communicate regularly. All the panelists emphasized the importance of regular communication among all the key partners. Even before sending out a press release, everyone should take a look at it first.

After visiting Storrs Center, I decided not to wait another twenty years before returning to Storrs … I mean, Mansfield. Look for an update a lot sooner than that!