As someone who lives in a university town, I can tell you it’s not every day that the university’s and town’s perspectives on a key issue are closely aligned.

But that’s the case in Storrs, Connecticut, where the University of Connecticut (UConn) and the Town of Mansfield both agree that what they really want and need is a new downtown center.

According to Cynthia van Zelm, who’s Executive Director of the Mansfield Downtown Partnership, townspeople for nearly half a century have wanted to develop a downtown hub for the community. But it’s only been over the past 15 years or so, that they’ve come to realize that for this to happen, they needed UConn to be a partner.

Before getting too far into the story, let me back up for a minute a tell you a bit about Storrs. First, and most importantly, said Town Planner Linda Painter — it’s not actually “Storrs” — “it’s really Mansfield.” But the name Storrs has stuck — and, in fact, that’s what the new downtown center will be called.

While less than 30 miles east of Hartford, it’s a different world — with a largely rural, small-town feel. In driving around the town (which I hadn’t visited in nearly 20 years), you’re struck by the farmland, the natural beauty — and the many joggers and bicyclists.

At the same time, it’s hard to avoid the behemoth in the middle of town — the enormous 3,100 acre UConn campus. As Painter pointed out, Mansfield has 26,000 residents, but at least half live on campus — “leaving probably around 10,000 year round permanent residents.”

A Congruence of Interests

Matthew Hart, Mansfield’s Town Manager, noted that while everyone appreciates the “great rural atmosphere,” townspeople “were also looking to have a place that could become the heart and soul of our community.” A public consensus emerged around several key principles:

The end result: Storrs Center — a new mixed-use downtown hub for the Town of Mansfield, now under construction.

For UConn, the desire for a downtown center was just as strong. As Robert Sitkowski, UConn’s Real Estate Officer, explained, existing stores and dining spots were scattered across town and beyond. With a large and growing student population, the lack of having a lively, attractive, accessible downtown center put UConn at a competitive disadvantage in recruiting students. With Storrs Center, “we’ll now have a physical destination to market.” 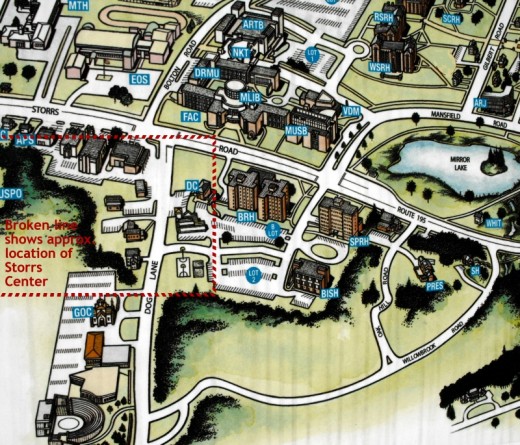 Hart concurred: “We don’t have what so many of our peer institutions have — a downtown. UConn has recognized that the lack of off-campus amenities is the number one reasons students decide not to go to UConn.”

Just how many students will be within walking distance of the Storrs Center development? Some numbers: 17,800 undergraduates — 75% of whom live on-campus in one of 18 student residences (many located within an easy walk to Storrs Center); plus 6,600 grad students. Now that’s a huge market. What’s more, the campus bus service will connect to the intermodal center to be built at Storrs Center.

In part II of this post, we look at how the town, university, and a private developer worked together to bring a new downtown to Storrs, Connecticut.