In 2005, the Brunswick (Maine) Naval Air Station was designated for closure — one of more than 350 military installations ordered closed between 1989 and 2005 by the U.S. Defense Department’s Base Realignment and Closure Commission (BRAC).

As with many other base closures, the impacts were severe. A report prepared following the BRAC announcement for Brunswick spelled this out:

“The Base consists of 3,300 acres, two runways, and a full complement of aircraft and personnel support services and facilities. Base employment [in October 2004] consisted of approximately 3,000 military; 1,400 reservists; and 700 civilians. … For every civilian worker on the Base who loses his or her job, there are expected to be two additional civilian workers in the Bath-Brunswick region who will be losing their jobs due to the loss of consumer spending in the area. The military and civilians and their families on the Base spend approximately $80 million a year in the local economy – about 7% of taxable retail sales. …” — from A Regional Community Audit (March 2006).

But, as the report also noted, the closure would “create new assets for the region,” including a pool of skilled workers; a stock of affordable housing; and — most significantly — “a prime piece of real estate on the coast of Maine available for redevelopment.” Summing up, the report said that “the challenge to planners is to translate the loss of the Base into a boost for the regional economy.”

During the Northern New England APA conference in Brunswick, I joined a dozen other planners in touring the base, to learn how redevelopment has been progressing.

The Midcoast Regional Redevelopment Authority (MRRA), a state-created entity, is the “master developer” of Brunswick Landing, as the redevelopment project is called. As Steve Levesque, MRRA’s Executive Director, told us, “our role has morphed from planning to implementation … and our primary job now is to implement the property’s master plan [adopted in 2007].”

And What a Job that is …

The base is a huge, sprawling collection of buildings, from giant hangars, to an assortment of warehouses, to a large motel (formerly the second largest in the state), to runways, tarmac, and a variety of aviation-related facilities, to a staggering amount of infrastructure — most needing some level of repair. 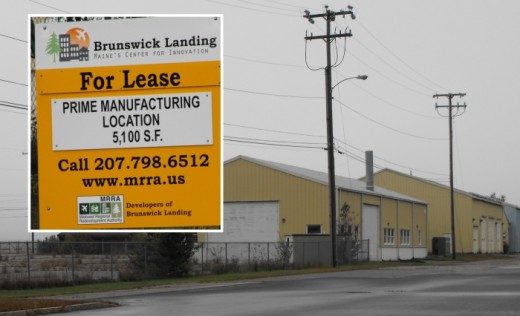 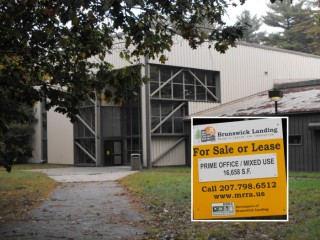 Some of the older buildings will need to be torn down; and many of the base facilities have needed environmental remediation (something the Navy has been doing, and must do before turning over a parcel to the MRRA).

Just consider the infrastructure. The MRRA inherited 27 miles of roads; 17 miles of electric lines; and 15 miles of water, sewer, and storm drains — not to mention the airport runways and tarmac. All of which it now maintains. As Levesque noted, “many of the utilities require significant upgrades.”

Among the “minor details” Levesque mentioned: “there used to be just one electric meter for the entire property; we’ll need 240 separate meters installed.”

Repairs have been funded from a variety of sources, including the FAA and EDA. The State of Maine also authorized a $3.25 million infrastructure bond to cover these kind of expenses.

Progress is being made. Levesque noted that 19 businesses are now in Brunswick Landing, with 264,000 square feet under lease from the MRRA. 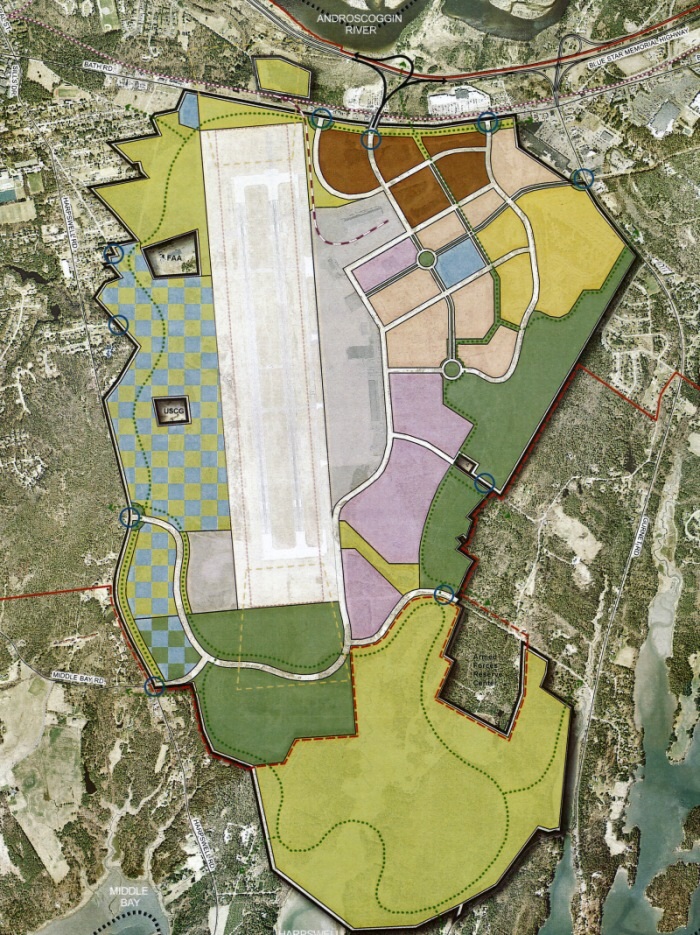 Also now under construction, a 79,000 square foot facility for Molnlycke Health Care, a Swedish medical care manufacturer (the inset image shows the final design; as with all photos in this post if you click on them they’ll pop up at larger size).

“MRRA will pay over $440,000 in property taxes to Town of Brunswick on behalf of businesses at Brunswick Landing this fiscal year,” said Levesque.

“Our goal is to bring in new businesses,” including business located within the region “that need space to grow.” But, he added, the MRRA adheres to “an anti-pirating” policy within the community. “We don’t want to replicate downtown Brunswick. We also don’t want too much retail or big box stores. What retail we’ll have will be just to support businesses here.”

The MRRA is gradually closing in on its short-term goal of “recovering the 700 jobs lost when the base closed.” But its long-range goals are much more ambitious.

As Levesque told us, over the next 12 to 20 years, the goal is to “recover the economic and total job losses in the primary impact community resulting from the base closure — that’s $140 million in payroll.”

Indeed, the Base Reuse Master Plan envisions 20 year build out of the Base as potentially generating total employment of 13,800 workers, with annual wages of $732,390,000. See Executive Summary, page 8.

Perhaps pie-in-the-sky. But when you drive through the base and see all this prime land — located close to the heart of downtown Brunswick; easily accessible by highway; and with a new executive airport at its heart — maybe something like that is within the realm of possibility.

In the meantime, there have been two perhaps unexpected beneficiaries of the redevelopment process: nearby Bowdoin College and one of Maine’s principal homeless services providers, Tedford Housing.

Catherine Ferdinand, who works in Bowdoin College’s Treasurer’s Office, told us the College will be receiving (at virtually no cost) some 270 acres along the western side of the former base, within a mile of the main college campus. “This is valuable land,” Ferdinand said, “because the campus is land-locked” and essentially built out. Land from the base “will give us room for a centralized warehouse facility that the College desperately needs, but can’t be built within the current college area.”

The additional land will also allow for three to five athletic fields and related buildings, plus a parcel “for an environmental sciences lab.” As Ferdinand noted, “this parcel includes wetlands and vernal pools and will provide great opportunities for field studies.”

The BRAC process also required that the base’s Reuse Master Plan address homeless housing needs. The Plan called for the establishment of a “homeless services trust fund to be capitalized by future base property sales / transfers or development exactions to support both housing and related services for homeless persons.” As the Plan noted, “providing service funding [to Tedford Housing] also allows the homeless to integrate throughout the community and lessen the impact on municipal services in one area by spreading the demand over a wider area.” 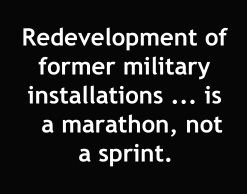 The redevelopment process has not always gone smoothly (witness a recent dispute highlighted in the Portland Herald-Press), but Levesque placed Brunswick Landing’s progress in perspective, noting that “redevelopment of former military installations is a long, tedious, expensive, and complex process — it’s a marathon, not a sprint.”

We received the following quite interesting information from Caroline Perez of i-media-international:

“Pemco Holdings, LLC (Pemco), in partnership with Midcoast Regional Redevelopment Authority (MRRA), has pioneered the use of dimming controls on public street lighting in the U.S. The project, developed at former Naval Air Station Brunswick Landing in Brunswick, Maine, included the upgrade of 650 street and area lights with new LED fixtures and radio frequency-enabled control and monitoring systems that not only save energy as LED lights, but also allow for the lights to be dimmed, increasing savings beyond previous thresholds. This is the first project of its kind in the U.S., and it is in Maine. The improvements will reduce gross energy and maintenance costs by an estimated 80% and will be paid for from savings generated by the program over a period of ten years. Pemco’s website is: http://www.pemcocapital.com.”