Frog Hollow is a predominantly Latino neighborhood, home to about 10,000 of Hartford’s 125,000 residents. It has a mix of brick walk-up apartments, neighborhood restaurants, stores, churches, and social clubs — sprinkled with doctors, dentists, lawyers, and bail bondsmens’ offices. Frog Hollow is a poor area, with median household income of just $17,333; a child poverty rate over 57%; and unemployment at 16%.

It’s the kind of ethnic neighborhood you’ll still find in many Northeast and Midwestern cities.

Frog Hollow has had its ups and downs over the past century. On its heels ten to twenty years ago, the past decade has seen new life and dynamism — in part the result of the Melville Charitable Trust’s purchase of the old Billings Forge plant and surrounding buildings.

Cary Wheaton, is Executive Director, Billings Forge Community Works, a nonprofit that organizes much of the activity at the complex of buildings (and receives about half its’ funding from the Melville Trust). She met with planners touring Billings Forge as part of the Southern New England APA conference.

In the 19th and early 20th century it had been a tool factory owned by the Billings & Spencer Company, a huge employer.

In the late 1960s it was converted into apartments, but as time passed, the building got worn down, reaching a 20% vacancy rate when the Melville Trust stepped in.

The Melvilles, as Wheaton described, began amassing their wealth as founders of Thom McAn shoes, and then as owners of CVS Pharmacy. In 2003 the Melville Trust bought Billings Forge and then six other nearby buildings to, as Wheaton put it, “show a different way to use philanthropy.”

The Melville Trust is the largest foundation in the United States that is exclusively devoted to focusing on homelessness and affordable housing.

During our morning walk we were also joined by Hartford city planner Jonathan Mullen and by David Corrigan, a Frog Hollow resident and member of the Frog Hollow Neighborhood Revitalization Zone (NRZ).

As Corrigan described it, the NRZ is a “quasi-municipal” organization that has developed a strategic plan for the neighborhood and advocates for community interests. Corrigan told us that “Billings Forge has stabilized the neighborhood by making a long-term commitment to it. This, in turn, has provided confidence for others to invest in the Frog Hollow neighborhood.”

The housing consists of 49 market rate apartments; and 46 subsidized. As Wheaton noted, they’re all mixed together within the

complex, not separately located so you can’t differentiate. Right now there’s a six-month wait for a market rate unit, and a two-year wait for a subsidized apartment.

Billings Forge is also home to the Firebox, a “125 seat farm-to-table destination restaurant — out of reach, price-wise, of local residents,” as Wheaton put it. First, it provides dozens of local jobs. Second, it introduces Hartford area residents to the Frog Hollow neighborhood — a neighborhood many have steered clear of. Dinners also receive, as Wheaton added, “a gentle pitch about supporting Billings Forge.

Rodger Phillips, an urban farmer with Hartford Food System — a 35 year old nonprofit that focuses on healthy food access — also spoke to us of how urban gardens connect with Billings Forge’s mission. Fifteen at-risk youth work at an urban garden in Frog Hollow, gaining experience not just in farming, but in other skills — like learning how to write a resume.

Phillips, plus a staff of one other full-time employee, two part-timers, and volunteers, manage four urban gardens which last year yielded 26,000 pounds of produce. Food is sold at area farmers’ markets, and also given to the local food shelf. There’s also a small 35 share CSA (community supported agriculture) — which distributes fresh produce weekly to the shareholders.

The end result, said Jonathan Mullen, a planner for the City of Hartford, is that Billings Forge is a “great model of putting sustainable practices into action … it’s almost a self-contained ecosystem.”

Across the street from Billings Forge Building is the Lyceum Building (also purchased by the Melville Trust in 2003). It houses the Trust’s local office, and serves as the center for meetings, conferences, and other events sponsored by dozens of different local organizations.

The Lyceum Building’s many lives reflect the changing nature of Frog Hollow itself.

Originally a fraternity of young Catholic men — the Lyceum housed a large library and reading room, and a gymnasium. In 1920, it was sold to the Hartford Box Company; then in 1940 became home of the Lithuanian-American Citizens Club. In 1980, the first floor was converted into a restaurant featuring Lithuanian specialties. Subsequent years saw the building as home to a wide variety of uses: a punk rock dance club; a roller skating business; a hot air balloon manufacturer; and an advertising agency.

One other important function of Billings Forge: providing arts and crafts space for neighborhood kids in the Studio building (part of the complex). Right now two “resident artists” — a drummer and a dancer — work with young people. 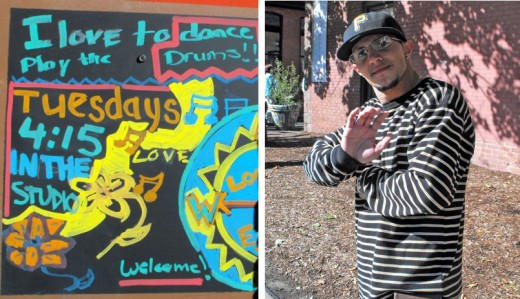 But I’ll leave the final word to Jimmy (above right), a young person who stopped to ask me why I was taking photos. After explaining, I asked him what he thought of Billings Forge. His reply: “it’s crazy, man … crazy good.”