Ten of us piled into a mini-van for a swing through Topsham, Maine (population about 9,100) — Brunswick’s suburb to the north. We were attending the Northern New England APA conference, held at Brunswick’s historic Fort Andross, perched above the Androscoggin River.

First stop was just across the river from Brunswick. Looming ahead on the right as we crossed over the Green Bridge: the historic Bowdoin Mill. Located on Bowdoin Mill Island, the Mill was renovated in 2000.

It was the cornerstone of a larger project seeking to create an urban hub for Topsham (as town planner Rod Melanson acknowledged “Topsham doesn’t have a downtown”).

The second major component of the project was construction of the “Red Mill” in 2006, a new 35,000 square foot building. But, as John Shattuck, Topsham’s Economic Development Director told us, the Red Mill has been standing empty for six years.

As a result, Bowdoin Mill Island had a bit of a desolate feel to it. While the Sea Dog Brewery in the old Mill seems to be prospering, the predominant “land use” on the Island is surface parking.

On to the Mall

That same “use” — parking lots — also  dominates the large Topsham Fair regional mall (though at a much larger scale), not far down the road from Bowdoin Mill Island. 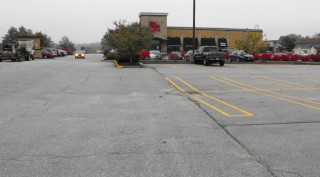 Melanson sees glimmers of change at Topsham Fair Mall, change that may eventually make it a more pleasant place for pedestrians.

He pointed to the Ruby Tuesday restaurant which (sort of) fronts the main road bisecting the Mall. Perhaps future infill uses will break what’s now a vast field of parking. But there’s a long way to go.

From the Mall it was a short drive over to the 800 acre Highlands Green active-adult development. Yes, it has the “requisite” golf course, and an incongruously wide roadway winding its way into the development. Attractive houses, and quite a few seniors out for fast-paced walks.

According to Melanson, there’s been “enormous boom in retirement population” in Topsham. Many come up from the Boston area; others are Bowdoin College alum looking to return to the part of Maine they loved as students years earlier. 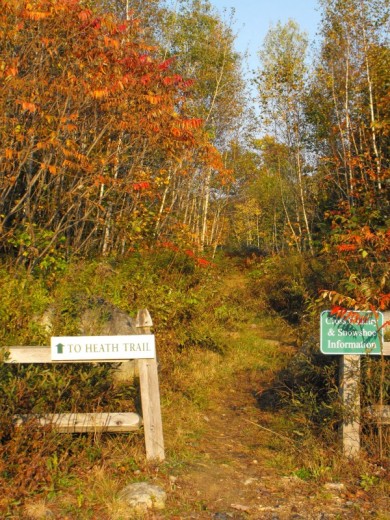 Returning to Highland Green the next day, I had the chance to spend a little time walking through the Preserve, and seeing some its natural beauty. Who wouldn’t want to live near something like this?

But the Highland Green development didn’t turn out the way it did by happenstance. As reported by Virginia Wright in Down East Magazine (December 2009):

“Members [of a group called Topsham’s Future presented [developer] JohnWasileski with an alternative blueprint drafted by a land-use planner that clustered housing and offset a smaller golf course with a trail-laced 750-foot-wide forested buffer along the Cathance, and they backed it up with a raft of statistics that suggested retirees are more interested in nature-oriented activities than golf. …”

It apparently worked, as development plans were modified and wide buffers along the Cathance River integrated into the project.

For a fascinating seven minute overview of what happened, see this video by the Cathance River Education Alliance, which shows how environmentalism and capitalism can work together.

And now the Cathance River Preserve and hiking trails are the big selling points — to seniors.  As the development’s web site touts:

Conservation is the “genuine article” at Highland Green. As part of the initial development of the community, a third of Highland Green’s vast 650 acre campus was preserved for permanent conservation through the Brunswick Topsham Land Trust.

Coincidentally, Ed McMahon, in his keynote presentation at the NNECAPA Conference, would also speak of how the presence of green space and natural areas has become a prime draw in new residential development, topping house design features in importance.

Highland Green residents — like all who live in Topsham — also have another beautiful natural area close at hand: the Androscoggin River. 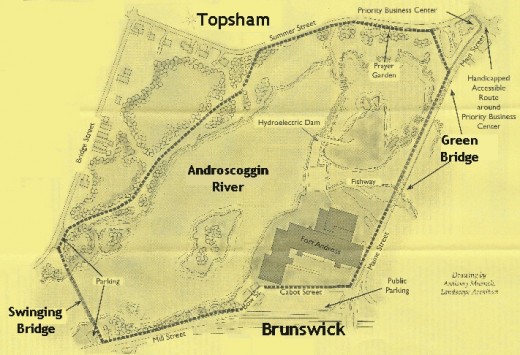 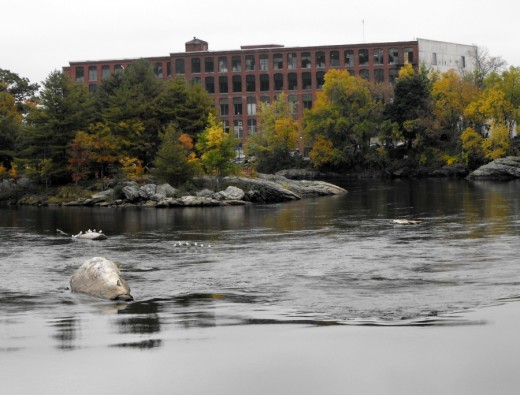 And by recently completed, I really mean recently, as Topsham’s section of the riverwalk officially opened just a few days after we visited.

The Town of Topsham received a $96,000 grant from Maine DOT with a $24,000 local match. The grant covered 80% of the design and construction cost of the Topsham portion of the riverwalk.

Along with wonderful vistas, the riverwalk loop also features a remarkable pedestrian bridge — the Androscoggin Swinging Bridge — designed by the firm of John A. Roebling’s Sons. Name sound familiar? Yes, that’s the same company that designed and built the Brooklyn Bridge.

According to a short article by Candace Kanes on the Maine Memory web site:

“When the Topsham Land Company decided to develop housing in Topsham Heights along the Androscoggin River, it decided a pedestrian bridge would help entice workers at the Cabot Mill in Brunswick to move across the river. The result was a suspension bridge [known as the Swinging Bridge, the Swing Bridge, and Le Petit Pont] that has become an integral part of both communities since the structure was completed in 1892.” 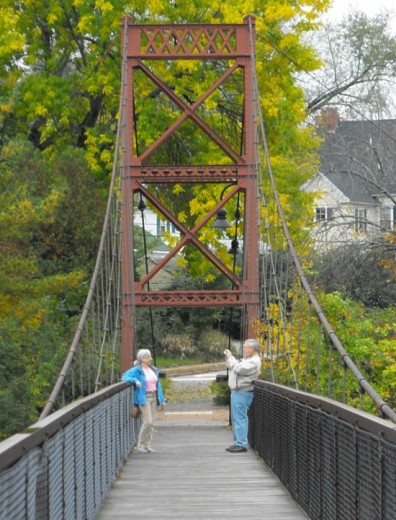 Placed on the National Register of Historic Places in 2004, the bridge — which had fallen into disrepair — was restored in 2007, the result of a citizen-led effort “Save Our Swinging Bridge,” which helped garner Maine DOT funding. In a fitting tribute, two of John A Roebling’s great-great-great granddaughters attended the rededication.

We ventured out onto the bridge — and I can report that, yes, it certainly does swing!