— continued from part I where West Hartford, Connecticut, Community Services Director Rob Rowlson spoke about how efforts to strengthen the existing West Hartford Center were followed by a huge opportunity.

As Rowlson described the new opportunity (and I’m paraphrasing from my notes just a bit):

“The biggest piece in the puzzle was the two old car dealerships. Both came available at about the same time in 2000. They were polluted sites, but the Town wouldn’t have been able to afford to clean them up. Only economic development and private dollars can clean up these kind of sites.

I had just heard about Whole Foods and aimed at getting Whole Foods into one of the dealership sites. They came. Their 40,000 square foot building was very exciting for the town.”

“Another developer got control of the other car dealership property. We talked to them about what we wanted … and we told them they had to have housing with the retail. But the developer was resistant to that. But we knew the strongest housing market in West Hartford has been residential properties close to West Hartford Center. They ended up building several dozen small studio apartments. It worked because the strongest demand for housing is from 25 to 35 year olds. Should they have built even more housing? No, having a limited supply helped drive the high demand.

I spent a lot of time with the developer on architectural vocabulary. For example, we didn’t want everything in the same dark red brick. We wanted some contrast, like you see in the Crate & Barrel, or in the lighter colored brick down the street.”

“Not everyone was happy with this, but it works. We also wanted to make sure the long building facades facing the street were broken up into sections.”

All told the Town invested over $48 million for public improvements — the garages, the library addition, streets and sidewalks, and other infrastructure investments (the developer’s investment came to $250 million). Not surprisingly — given West Hartford’s savvy approach to spending municipal funds, the tax and parking revenue (especially from the two garages) will more cover the annual debt from the Town’s investment in Blue Back. 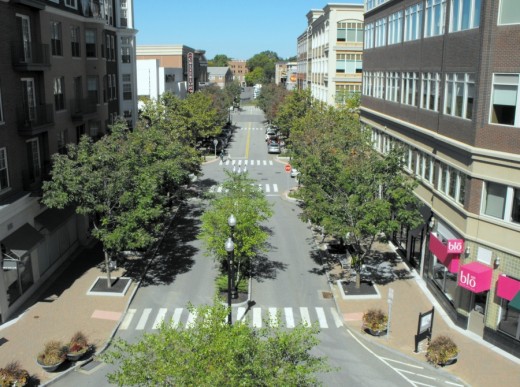 Walking through Blue Back Center it all seems to fit together nicely. The development avoids the bland sameness you too often see in large new developments, while at the same time not being overly cute and Disneyesque.

But not everyone is buying in. As Steve Campo, Executive Director of TheaterWorks in Hartford, noted in a short commentary:

“Occasionally, after visiting West Hartford Center, I’ve returned to my longtime home in downtown Hartford disheartened and with a measure of envy. Often, though, I note another facet of my experience: It all seems a bit too easy. Yes, the streets, shops and restaurants are filled. You feel part of the picture-perfect American town — warm, inviting, clean, affluent, seemingly free of all the problems of mixed-culture urban centers, but not quite real.” — from “People Working to Make It Better” [scroll down till you spot the article after using the link].

However, Campo is likely in the minority on this. Given the strong leasing of retail space and apartments — even during a weak economy — many seem quite pleased with the atmosphere at Blue Back Square and West Hartford Center.

As Josh Kovner reported in the Hartford Courant, “Well-designed, mixed-used developments — those that work like neighborhoods, with the housing, retail, office, entertainment and public aspects supporting one another — can outlast economic upheaval. …

[According to Fred Carstensen, a professor of economics at the University of Connecticut and director of the Connecticut Center for Economic Analysis], there has been a shift over the last 15 years “in people’s preferences about where they want to live and what they want out of their neighborhoods. Increasingly, they want to walk to get what they need. The physical proximity within Blue Back, the relatively narrow streets, the convenience make it a very inviting place.”

At the Heart of Blue Back Square

At the heart of Blue Back Square is what Rowlson referred to as the “mini Spanish steps,” a delightful gathering spot — located, interestingly enough, right in between a Barnes & Noble and the renovated Town Library (also named after Noah Webster). As Rowlson noted, “our library is a great draw for the area, and it’s very heavily used.”

Blue Back Square and West Hartford Center both struck me as having a quite vibrant atmosphere. Yet they also felt safe and comfortable. [Note: feeling safe was a positive attribute, said planner Don Poland, mentioned by just about every person he interviewed about the adjoining West Hartford Center].

One other essential ingredient is the presence of ample trees and well-tended flowers just about anywhere you look.

Poland related that this goes back to Barry Feldman, the town manager who arrived in 1985. Feldman had a strong interest in the success of West Hartford Center and held weekly meetings with the merchants. But the first thing he did was have the Town plant flowers. As Poland relates, “just about everyone I’ve talked to [during interviews for his PhD research] mentions this — this investment in flowers.” And, as Rowlson quickly added, “the flowers have never gone away.”

Rowlson also stressed the value of investing in tree plantings at Blue Back Square, advising us “you need to put trees in — and good size ones.”

How the West Hartford Process Works

But time after time while meeting with us, Rowlson kept going back to what he felt was the counter-productive nature of having detailed plans and design standards in place. “We don’t have design standards,” he said, “but if you look at what we’ve done, it all fits together.” If you present a developer with standards that “have too much detail, the good people — who you want to invest — will walk away.”

On the other hand, West Hartford did engage in a negotiated process with the developer, where the Town — despite its not having a detailed, officially adopted “rule book” — didn’t shirk from influencing the look and feel of the development, and its mix of uses. At least, that’s how Rowlson described the process to us.

This was echoed in Josh Kovner’s Hartford Courant article, where he quotes West Hartford Mayor Scott Slifka as saying: “We took great pains during the approval process to make sure this wasn’t going to be a mall or a strip plaza …. This was going to be walkable, it was going to be ‘dinner and a movie,’ it was going to be the next generation of our Center, a draw for families, a place where people lived.”

As planner Don Poland put it, “there is an anti-planning undertone in West Hartford.” The Town’s focus “has constantly been on how to make investments happen.”

It’s hard to say from a brief visit. But on the bus ride back to Hartford, as several of us chatted, there was admiration for what West Hartford has accomplished, but questions about how well their approach would work elsewhere. 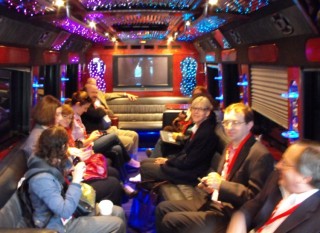 Editor’s Note: I just had to include this photo of the “party bus” which carried us back to the conference site. It offered the ideal atmosphere to “debrief” our visit to West Hartford — while causing several of us to imagine how often we’d take the bus if we had a choice like this! (click on the photo, and maybe you’ll spot a CT or MA planner you know)

For more on the benefits libraries can bring to downtowns, see: