Brunswick, Maine (population just over 20,000) has a wonderful downtown — stretching about ten blocks between historic Fort Andross on the north and the First Parish Church and Bowdoin College on the south.

Fort Andross has been restored, and is filled with the kinds of businesses any town would want to have (it was also the location for the Northern New England APA Conference, where I’m reporting from). 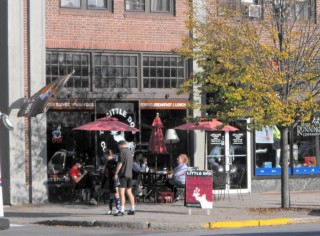 The sidewalks are perfect for strolling and window shopping. Downtown is just about ideal. Except for one thing: those human squirrels you see scurrying across Maine Street.

Yes, Brunswick has that curious species that afflicts quite a few of our downtowns.

Don’t believe me? Here are some I spotted. 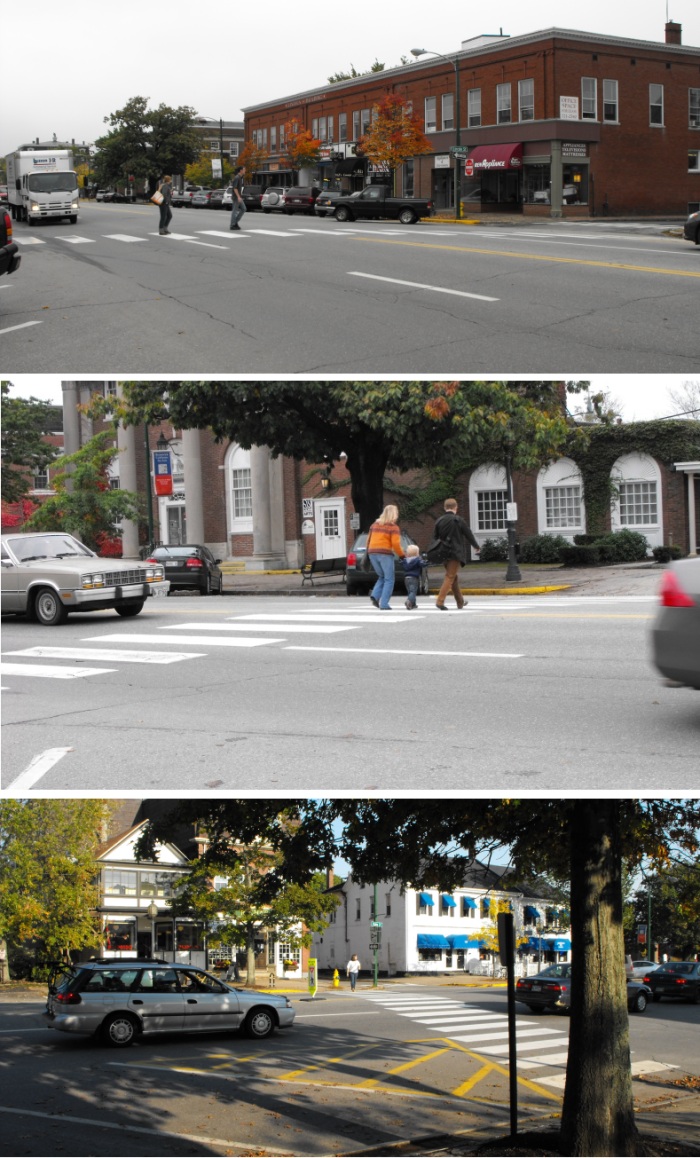 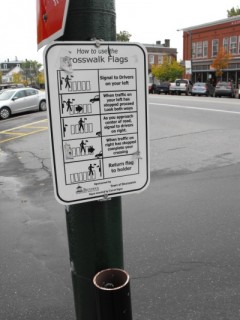 The town has even provided crosswalk flags (I presume) for pedestrians to carry when crossing Maine Street. But all I found was a complex set of instructions — no flag. 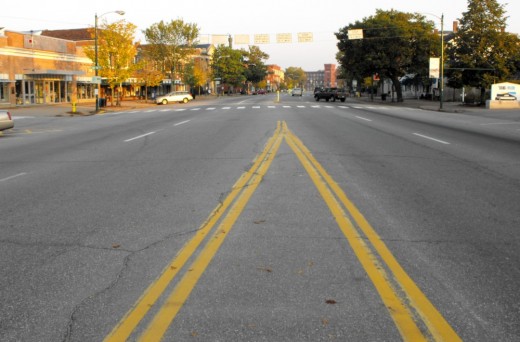 The Downtown Plan — which I’ll mention again shortly — sums up the situation: 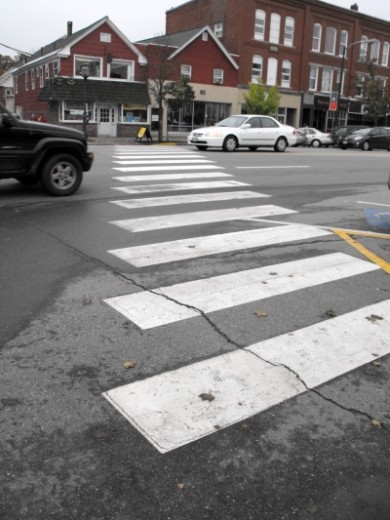 A dozen of us attending the Northern New England APA conference met with Brunswick Planning & Development Director Anna Breinich and with Margo Knight, a Town Councilor representing the downtown district, to hear what steps are being taken.

Margo Knight’s the kind of citizen activist who’s vital to many small towns. She moved to Brunswick 12 years ago to be close to her husband’s family’s roots. She’s worked in the fundraising field for 30 years for non-profits, and currently for Bates College in nearby .

From 2008 through 2010, Knight chaired the Town Council’s Downtown Master Plan Committee, tasked with crafting a plan for — among other things — improving pedestrian and vehicular movement in Brunswick’s downtown (Knight was named Citizen Planner of the Year by the Maine Association of Planners for her work). In January 2011, the Council unanimously adopted the Downtown Master Plan (pdf file).

Among the Plan’s recommendations:

“Using knowledge gained from traffic experiments coordinated with public safety officials, plan changes on Maine Street to create neck-outs and mid-street refuges (planted islands or medians), and/or replace selected corner crosswalks with new mid-block pedestrian crossings to make it easier and safer for pedestrians to cross the wide street, to slow traffic down in areas of heavy pedestrian use, and to make pedestrians easier for motorists to see.” p. 16.

Last November, the Town invited transportation planning experts Dan Burden (of the Walkable and Livable Communities Institute) and Gary Toth (of Project for Public Spaces) to Brunswick to do a walk audit. Both Burden and Toth have long championed making streets and downtowns safer and more comfortable for pedestrians and bicyclists. [See note at the end of this post for information on the technical assistance program that made this possible].

As Knight said, “We were looking for ways to slow down traffic, but keep it moving, and also aim for making Maine Street better for bicyclists and pedestrians. “ 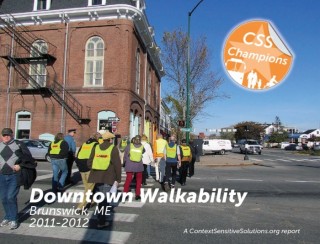 As described in the resulting Downtown Walkability report: “the intention of the walk audit was to enable participants to look at the study area through the eyes of various street users and to begin to understand how street improvements could support identified community-wide goals.”

Following the audit, participants reconvened to hear take-aways and suggestions from Burden and Toth and to discuss these preliminary recommendations and their own observations and thoughts. As the report notes: “the workshop allowed participants to synthesize and reflect on their observations and findings and develop a prioritized list of recommendations for improving Maine Street and the entire downtown study area.”

One of the interesting things a walking audit can bring about is a change in mind-set. Instead of viewing the width of Maine Street as a problem, participants were challenged to view it as an opportunity — an opportunity for creative solutions that would actually strengthen downtown as a place for bicyclists, pedestrians, and yes, motorists, too.

Among the recommendations in the Walkability report (a number of which were expansions of ideas in the Downtown Master Plan):

— Narrower lane widths. As the report noted “wide lanes are often defended in the name of safety, but it has been shown that 12’ wide lanes rarely offer any additional safety over 10’ lanes.

— Adding a median. “Medians can help with access management by limiting turning locations and holding space for turn lanes, as well as in traffic calming, by effectively narrowing the travel-way in each direction. They can shorten crossing distances for pedestrians by creating refuge islands.” With its wide cross-section, Maine Street was deemed “a strong candidate for a median.”

— Adding sidewalk bump-outs. “Also known as curb extensions, bump-outs are expansions of the curb line into the roadway adjacent to the curb (typically into an on-street parking zone) installed at intersections or midblock locations. They also create a visual narrowing of the roadway, which typically results in vehicle speed reductions.”

— Consideration of a roundabout at Maine and Pleasant Street (see photos). “A roundabout here would simplify vehicular movements and reduce potential conflicts between vehicles and pedestrians, providing greater priority to pedestrians while sustaining a more steady flow of traffic. It is also an opportunity to create an entrance or focal feature for downtown.”

The Walkability Report recommends “piloting” one or more of the roadway reconfigurations before making a final decision. “Traffic reconfiguration pilot projects should take place for limited period of time: a month, a series of weekends over a season, or a weekend. … Road reconfigurations could be completed with materials as simple as traffic cones and barrels, but [we] recommend using more contextually-appropriate materials including planters, street furniture, and if longer pilots are deemed feasible, paint.”

Margo Knight was optimistic that changes would take place. One of the key areas of concern for downtown merchants is the impact of any change on parking spaces. As Knight described, “the business owners counted parking spaces in the plan … because parking is so precious downtown.” But they’re also interested in making Maine Street more pedestrian-friendly. After all, more pedestrians means more business.

* note: the walk audit and follow-up Walkability report were supported by the CSS Champions Technical Assistance Program (CSS stands for Context Sensitive Solutions). CSS Champions is a Federal Highway Administration program administered by Project for Public Spaces. Besides Brunswick, the city of Denver, Colorado, and the states of New Mexico and Delaware, are participating in the CSS Champions program.

According to Brunswick’s Anna Breinich, “We were honored to be nominated and selected [for the CSS Champions Program]. We received $25,000 from FHWA in the form of technical assistance from the PPS Team … the Walkability Workshop and follow-up report. It was a great experience and led to concrete ideas for the Town’s  consideration and implementation.”