The two most cited reasons … having your voice heard on key local issues and being able to serve the community.

Why do people want to serve on their local planning commission?

Our survey included the following question:

What were the top three reasons you were interested in serving on your planning commission?

We received replies from 186 individuals who are (or have been) planning commissioners. We found that most of the replies could be grouped within the following broad categories:

2. Serve the Community. Not far behind as a reason was the desire to serve their community. A total of 82 individuals — 44 percent — mentioned this as one of their top three reasons for wanting to be on the planning commission.

3. Relevant Expertise. Listed by 31 percent of our respondents as (at least) one of their three top reasons for being interested in serving on the planning commission.

4. Interest in Planning, Land Use, or Local Government. This was mentioned by 17 percent of those replying to the question.

5. Learning Opportunities. Noted by 12 percent of those who replied.

In a country where local democracy is treasured, it’s essential that citizens play an active role in their community — and local planning commissions offer an important opportunity for this.

It was good to hear that public service is still a major reason individuals want to devote many (often unpaid) hours to planning commission service. At the same time, it’s understandable that many also view the commission as a place where they can have input on local decisionmaking.

In a country where local democracy is treasured, it’s essential that citizens play an active role in their community — and local planning commissions offer an important opportunity for this. But, as you’ll see in a coming post, many of our survey respondents reported a lack of racial, ethnic, or gender diversity on their commission.

1. Have a Voice in Decision Making

As we noted in the Summary, 99 individuals (53 percent of those replying to the question) listed as one of their reasons for being interested in serving on the planning commission a desire to have a voice in decision making. Of these 99 replies, 52 mentioned something fairly specific they wanted to accomplish, while the remaining 47 noted a more general desire to be involved in decision making.

A sampling of replies that we categorized as showing an interest in accomplishing a specific objective:

In contrast, other replies reflected a more general interest in being involved in decisionmaking:

Forty-four percent of those replying to this question indicated as one of their reasons for wanting to be on the commission a desire to serve their community. 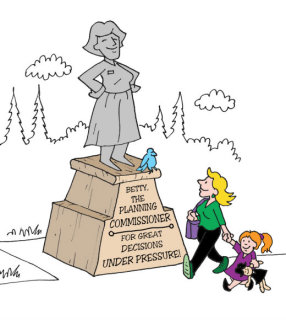 There was very little variation in the replies that fell into this category. Words like “serve,” “give back,” and “contribute” were found in the vast majority of responses we placed in this category.

Thirty-one percent — 57 individuals — listed as one of their top reasons for wanting to serve on the planning commission their expertise or relevant experience. Of these, 15 noted that they had a background as either a planner or as an academic involved with planning.

A sample of replies that we included in this category:

Being a retired builder I had some knowledge of what the problems are.

4. Interest in Planning, Land Use, or Local Government

Of the 186 individuals replying to the question, 17 percent mentioned as a motivating factor their having an interest in planning, land use, or local government.

We included in this group those replies that specifically mentioned an interest in planning or local government, such as:

Twelve percent of those replying noted learning opportunities as one of their reasons for being interested in serving on the planning commission. We included in “learning opportunities” replies that mentioned a desire to stay current with what was going on in the community.

Some of the replies we included in this category:

Great learning experience in many dimensions, including “people perspectives.”

Not surprisingly, there were quite a few reasons given by individuals for wanting to serve on a planning commission — many did not fit into the categories we just described.

Here is a sampling of “other” reasons why some of our survey respondents wanted to serve on the planning commission:

A couple of other responses also caught our eye — including one from an Ohio board member (we trust with a sense of humor) who wanted to serve in order to help the commission “become a better looking group”!

We were also struck by the comment from a Missouri commissioner who noted as one reason for wanting to serve the “non-elective nature of public service.” This comment reminded us that planning commissions can offer an opportunity for talented individuals — who may be reluctant to run for office — to serve their community. Note: as we report in another post, 95 percent of those who replied to our survey said they were appointed, not elected, to their planning commission.

I’m a glutton for punishment!

While many who serve on planning commissions are drawn by related experiences or expertise, it was interesting to hear from a Virginia planning commissioner that part of the attraction was that it required “reaching outside my comfort zone.”

Finally, one commissioner from California gave as a reason for wanting to serve: “I’m a glutton for punishment!” We’ll attribute that comment to having completed our survey right after a long, contentious commission hearing!

Our Next Post: Most Important Skills for Planning Commissioners to Have