What are the skills you’ve found most important in serving on a planning commission? Feel free to provide up to 3 responses.

After reading through the responses we received from 181 planning commissioners, we found that many could be grouped into the following categories:

1. Listening. The skill of listening to what others have to say was the most often cited skill, mentioned by 75 planning commissioners (41 percent of the total).

2. Having Knowledge or Understanding of Community Issues or Ordinances. Comments by 53 planning commissioners spoke to the importance of having knowledge or understanding of issues facing the community, or of local ordinances and laws.

3. Being Fair & Open-Minded. These characteristics were mentioned by 33 commissioners as being important in serving on a planning board.

4. Being Prepared. The importance of being well-prepared for commission meetings was mentioned by 30 individuals as an important skill.

5. Ability to Communicate. Public speaking and the ability to communicate well were cited by 27 of those replying to our question.

6. Analytic Ability. Some 24 commissioners highlighted some aspect of analytic ability as an important skill.

7. Relevant Experience. Having relevant experience or background was mentioned by 20 people.

Be a good listener. 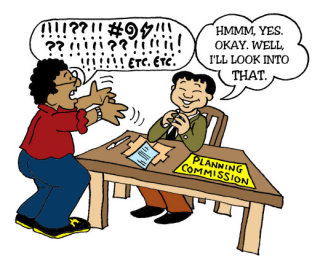 Almost all replies were very short, with many just using the word “listen” or “listening,” or similar short phrases such as: “Be a good listener,” “Listening closely to all speakers,” “Active listening.”

Listening, for a planning commissioner from Colorado, meant “Checking in with the community to represent them well.”

Finally, a respondent from Kentucky listed as the three most important skills: “Ability to listen; ability to learn; and ability to take action.”

2. Having Knowledge or Understanding of Community Issues or Ordinances / Training

Comments by 53 individuals (29% of those responding to the question) spoke to the importance of having knowledge or understanding of issues facing the community, or of local ordinances and laws. We also grouped in this category seven comments that mentioned the value of enrolling in training or educational programs. 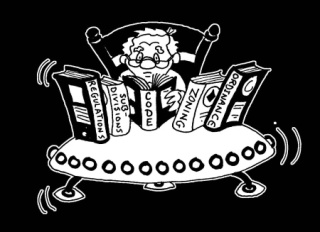 A sampling of the comments we included in this category:”Knowledge of the ordinances and laws.”

Fairness and being impartial and open-minded were frequently mentioned in comments, being noted by 33 of the 181 commissioners replying to our question.

Typical of the comments we included in this category: 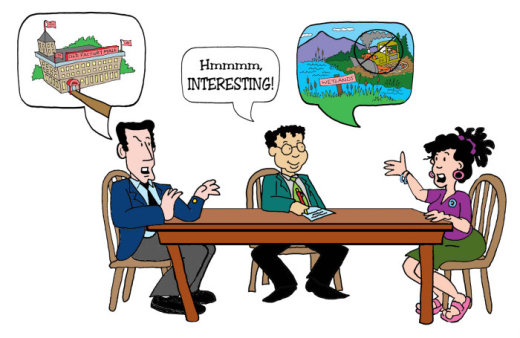 Two comments worth noting: a Vermont planning commissioner wrote: “Be open minded, courteous and modest — don’t assume you know everything and accept that you can learn from someone who holds a different view than you,” while a California commissioner listed as an important skill, “Sensitivity to both community members and applicants (developers) while maintaining standards.”

The importance of being well-prepared for commission meetings was mentioned by 30 individuals as a valuable skill for planning commissioners to have. While these comments overlap slightly with comments about having knowledge or training (mentioned above), we found them sufficiently distinct to group separately.

Visit the sites to be discussed whenever possible.

Most all of these comments were short and to the point, such as:

Public speaking and the ability to communicate well were cited by 27 individuals as one of the three most important skills for planning commissioners to have.

Among the replies we grouped in this category:

24 individuals highlighted some aspect of analytic ability as an important skill.

While a number of responses were short, such as “analytical ability,” “evaluate information,” “rational analysis,” “critical thinking,” “sorting out what is meaningful,” others were a bit longer:

A Michigan planning board member, for example, listed as an important skill, “Trying to look at issues from what is best for the city and is logical,” while a planning commissioner member from California cited the “ability to comprehend complex matters and balance competing interests.”

Several comments which we also grouped under “analytic ability” were similar to those of another California planning commissioner who wrote of the importance of: “Understanding the long-term impact of development decisions and avoiding unintended consequences.”

Having relevant experience or background was listed by 20 individuals as an important skill for planning commissioners.

A sampling from these replies:

Regarding that last comment, we found it interested to see that quite a few of the planning commissioners responding to our survey also serve (or have served) as professional planners — presumably in most cases in different communities. Of the 202 individuals who completed our questionnaire and said they serve (or have served) on a planning commission or zoning board, 55 — 27 percent — also said they work (or have worked) as professional planners.

Editor’s Note: In past years, we’ve featured articles offering tips from individuals who have served in both capacities. See both “Planner and Commissioner” and “Sitting on Both Sides of the Table.”

There were three other smaller clusters of responses:

— We received comments from 13 individuals mentioning the importance of patience.

— Nine individuals mentioned as one of three most important “skills” showing respect to the public.

We also received a number of comments touching on a broad variety of other skills or attributes of planning commissioners. Among them: 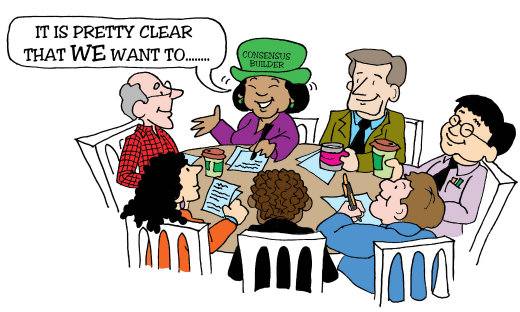 There was also this reminder from a North Carolina planning commissioner (applicable, we would guess, in many situations): “Shut up when you’re winning.”

The ability to work as a “team member” on all issues we deal with.

A Connecticut planning board member listed as an important skill, “the ability to work as a ‘team member’ on all issues we deal with,” while a planning commissioner from Michigan listed as a key skill “learning not to roll my eyes.”

An interesting skill noted by a Massachusetts zoning board member is “questioning unquestioned practices,” while an important attribute described by a Tennessee planning commissioner is “the ability to accept and support majority decisions.” 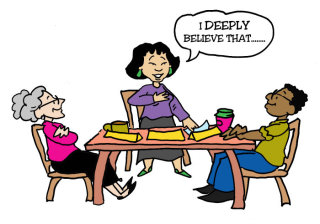 Two planning commissioners, one from Wyoming, the other from California, respectively responded: “Courage to say the truth and stand on your principles respectfully,” and “Personal integrity is utmost.”

Later this Week, Our Next Post: Most Important Skills for Staff Planners to Have