We asked respondents to indicate how well their planning commission reflects their community’s diversity/demographics. 1 We provided three choices: 1. Very Well; 2. Adequately; or 3. Not Very Well. Here’s what we heard back. 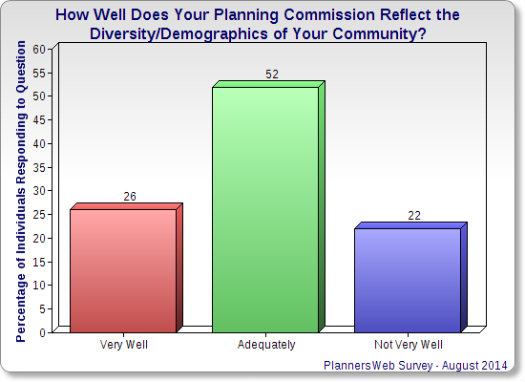 We also asked our respondents who said either “Not Very Well” or “Adequately” to briefly explain why they thought that was the case.

Among the 96 individuals who answered “Not Very Well”:

Among the 225 survey respondents who answered “Adequately”:

Then we asked those who said “Very Well” what they’ve done to accomplish that. You can see some of the responses in the next section of the post.

We want to provide you with a sampling of what we heard back from those who indicated their commission represented their community’s diversity either “Adequately” or “Not Very Well.”

“All our members are Caucasian and college educated and our community is 45% African American. We have only ever had one African American even apply during my 7 year tenure on the Commission.”
— from a planning commissioner in small community in Maryland.

“We have a growing number of Asian, Latino and African American populace that are insufficiently represented. Neither do they participate in local planning events. There is a need for alternative means of reaching these underserved populations.”
— Community member from mid-size city in Washington.

“100% white [commission] in a County with 40% black, Hispanic and Asian population.”

“100% white [commission] in a County with 40% black, Hispanic and Asian population.”
— Planner in Virginia county with over 100,000 population

Several of those commenting provided some explanation of why they did not have greater diversity on their commission.

The commitment requires night meetings, which can be lengthy. Most P&Z members are male retirees … We need more women, more minorities, and some younger members.

“The commitment requires night meetings, which can be lengthy. Most P&Z members are male retirees whose interests lie in community involvement and volunteerism. We need more women, more minorities, and some younger members.”
— Planner from a large city in New Mexico

“Community is largely upper income and relatively homogeneous. Commission make-up is same. Racial, income, home tenure diversity would be welcomed on commission (by staff certainly). But populations from which to draw are relatively small.”
— Staff planner in a small Vermont town (under 5,000 pop.)

“Commissioners tend to be older than the population. It is difficult to find minorities willing and able to serve.”
— Planning commissioner mid-size Illinois city

“Not enough qualified volunteers to have a choice.”
— Georgia elected official

Perhaps a better outreach effort into the minority communities, specifically black and Hispanic, would help.

“While the town has gotten better in terms of gender balance, there has never been a minority member of the planning commission, despite having a significant black community. The onus however for creating diversity on town boards does not fall solely on the town council. Planning commissioners are chosen from a pool of applicants and that pool is typically white and male. Perhaps a better outreach effort into the minority communities, specifically black and Hispanic, would help, but if no individuals step forward, it is hard to diversify the commission or any other board.”
— Planner in small town in Virginia.

On the other hand, 26 percent of those responding told us their communities had done “very well” in having a demographically diverse planning commission. What, if anything, had they done to achieve this? Here’s some of what we heard back:

“The Governing Body that appoints the Planning Board take diversity into consideration when appointing new members.”
— Planner from a small Massachusetts town.

County has made a concerted effort to make all of their voluntary boards and commissions gender balanced. In fact, Iowa just passed a law to that effect.

“County has made a concerted effort to make all of their voluntary boards and commissions gender balanced. In fact, Iowa just passed a law to that effect in the last couple of years.” [Editor’s note. See this footnote 2 for some of the provisions of this law].
— Planning commissioner in mid-size city in Iowa.

“Mayor looks at neighborhoods within the city and selects from as many areas and socio-economic representations as possible while still selecting educated, ethical, wise people.”
— Planning commissioner from a big city in Utah.

One common thread in the responses is that it often takes awareness and leadership to promote diversity — and that also often means, as a Kentucky planner noted: “active outreach.”

Note from the Editor:

Over the years, we’ve run several articles in the Planning Commissioners Journal on ways of fostering greater diversity. 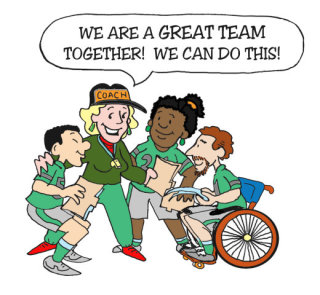 Elaine Cogan has focused on the importance of active outreach to minority communities, and provides a number of suggestions on things to try. See her articles, “Well Rounded Membership First Step in Well Functioning Board” and “Variety on the Planning Commission is a Virtue.”

Recently, Casey Green and Dan Rosenblum in “Can ‘Citizen Planning Academies’ Work in Your Community?” discussed the role these organizations can play. One thing they can do is enable a diverse cross-section of the population to become more familiar with local planning, while creating a pool of future planning board members. That’s similar in ways to the comment about using a committee working on the comprehensive plan to get more people involved with planning.

We’ve also focused on efforts to increase the involvement of younger people in planning. Take a look at Dan Rosenblum’s article “Why Have Students Serve on Planning Boards?,” as well as a short article by Kit Hodge, “The Next Generation of Your Planning Commission.”

It also almost goes without saying that creating an atmosphere of respect and collegiality will also help in making everyone more comfortable with serving on a planning commission.

Our Next Post: Reasons for Interest in Serving on a Planning Commission