Doug Wieland, Executive Director of the Genesee County Land Bank, pulled out a sheet of paper and pushed it across the table towards me. 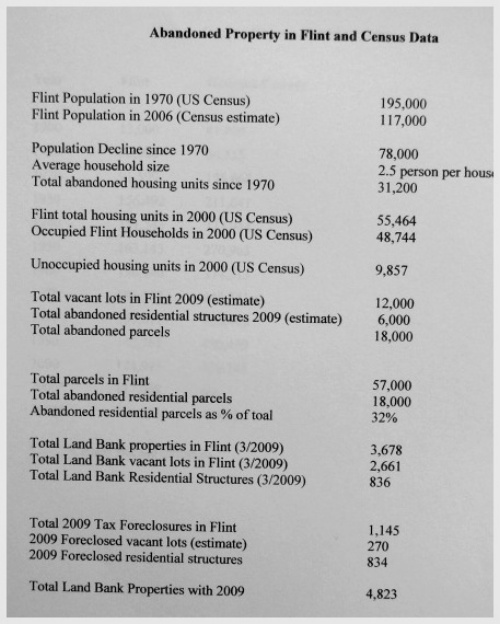 A staggering 32 percent of all residential parcels in Flint are abandoned.

One of the central missions of the Land Bank is to purchase, hold, and then resell abandoned structures and vacant lots.

The Land Bank is an independent County authority (Dan Kildee, the County treasurer, serves as its President). It receives funding from the County, as well as from state and federal sources (such as brownfields and land revitalization funds; note that under Michigan law, land held by a land bank is considered a brownfields site). Revenue also comes from private foundation grants (including the Charles Stewart Mott Foundation) and from the resale of the properties the Land Bank holds.

This past year, the Land Bank acquired 1,545 foreclosed properties; its total inventory currently stands at 4,823 such properties.

One of its major accomplishments, Wieland told me, is that “the Land Bank has largely taken speculators out of the market.” But it’s impossible for the Land Bank to physically care for all the lots it has acquired, and some in the community have complained about this, Wieland noted. (As you’ll see in part II of this post, one way the Land Bank addresses this concern is by encouraging neighborhood groups to maintain Land Bank properties, in return for technical assistance from Land Bank staff).

One concept that I noted during my recent visit to Cleveland, Ohio, is the idea that older, industrial cities may need to plan to shrink, not grow. In Cleveland, the strategy calls for reusing vacant land for urban agriculture, stormwater management, or recreational purposes. This would, at least over time, save the city money by enabling it to focus its infrastructure dollars (as well as resources supporting housing and economic development) on fewer areas.

The same approach is taking place in Flint. As reported in the Flint Journal (June 19, 2009) “the idea of planned shrinkage became a viable concept in Michigan a few years ago, when the state changed its laws regarding properties foreclosed for delinquent taxes. Prior to that, abandoned buildings and homes tended to be tied up in the courts, adding to blight. Now they’re being snatched-up by county land banks, which have a powerful tool to change the face of communities. ‘The idea is to reshape the city so we have a small collection of sustainable neighborhoods with open green space,’ said Kildee, a Flint native and chief executive of the local land bank.”

But compared to Cleveland, Flint — through use of the Land Bank — has been much more aggressive in dealing with vacant, tax foreclosed properties. Note: a land bank is being formed in Cuyahoga County, Ohio, which includes Cleveland.

Take a look at a map of Flint. The red shows vacant lots currently owned by the Genesee County Land Bank Authority. 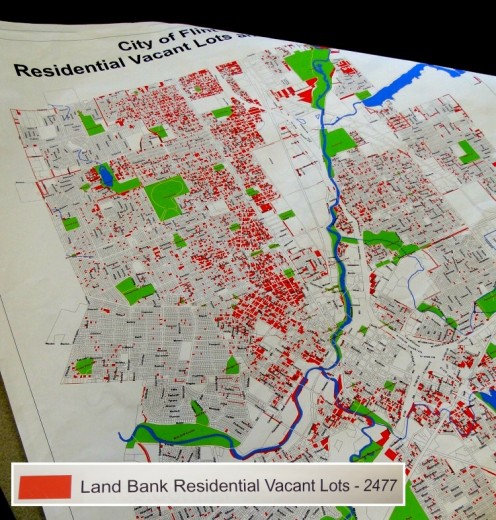 The Land Bank “bundles” many foreclosed properties coming up for auction by the County Treasurer’s office. That is, Land Bank staff, based on personal inspections of the tax foreclosed parcels, determine which should be included in one huge single “bundle” of properties up for auction. This has helped ensure that these bundled parcels will end up in the hands of the Land Bank, not in the hands of speculators, as it’s unlikely any one speculator will bid on a very large package of assorted properties. If property is not sold at auction, it goes to the Land Bank.

For more information related to the above chart (from the Land Bank web site).

As Christina Kelly, lead planner for the Land Bank told me, too many planners across the country are unfamiliar with the importance and mechanics of the foreclosure process. At the same, she added, local officials (often in the Treasurer’s office) have little knowledge of the spatial and planning-related impacts foreclosures have. Tip to planners: it might be a good idea to sit down with those in your city or county who handle tax foreclosures.

see Part II for my reports on two Flint neighborhoods