by PCJ Editor Wayne Senville, reporting from the lakeshore of northwestern Indiana

The sign warned that it would be a strenuous climb. Could this really be the case in flat, northwestern Indiana? And for a trail just a few hundred feet long? But that’s what you face in climbing Mt. Baldy, a magnificent 126 foot high, moving (4 feet/year) sand dune that’s part of the Indiana Dunes National Lakeshore. If you’ve never climbed a steep trail made of sand, it’s quite a treat!

When you reach the top you’re rewarded with a remarkable view of a dune landscape, framed by a man-made industrial landscape. For more on the formation of dunes, see the end of this post.

What you see to the east are the cooling towers of the large coal-fired power plant in nearby Michigan City (click on photos to pop-up larger size images).

Indeed, what’s most striking along the 46 mile stretch of Indiana bordering Lake Michigan is the intermixing of natural beauty and heavy industry — primarily steel mills, transmission lines, and power plants.

photo immediately below shows view of industry from Dunbar Beach within the Indiana Dunes National Lakeshore in the town of Beverly Shores; below this: marshes less than a mile inland. 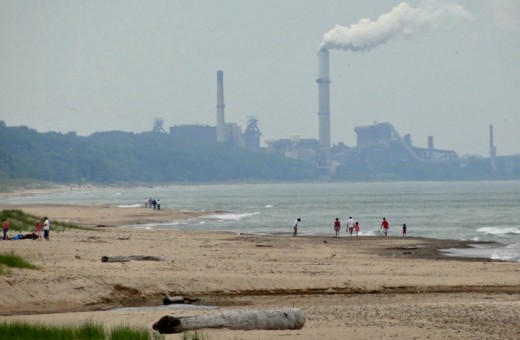 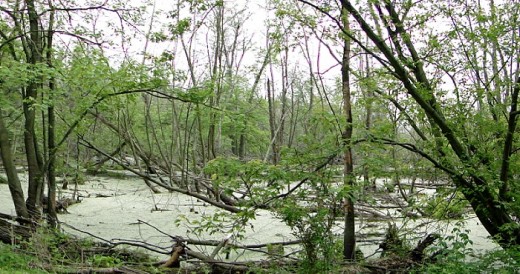 What is less well known about northwest Indiana is the natural beauty of the lakeshore area, even though it is interspersed with industrial sites.

One of the priorities of the Northwestern Indiana Regional Planning Commission (NIRPC) the past five years has been developing — and now starting to implement — a comprehensive plan for the lakeshore portion of the region. 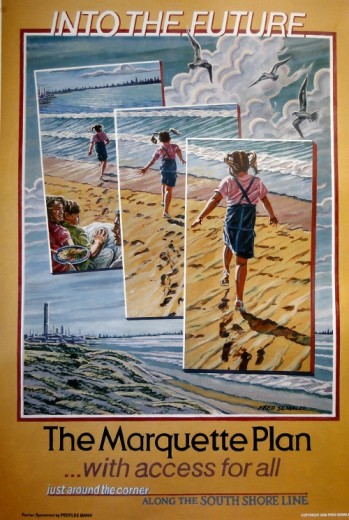 It’s called the Marquette Plan, and it reflects the changing realities of northwestern Indiana. Phase I of the Plan, completed in 2005, focused on some sixty square miles of land, much of it close to the Lake Michigan shoreline. Phase II extended the lakeshore study area eastward from Portage, Indiana to the Indiana/Michigan state line. Many of the Plan’s recommendations underscore the shift in focus from an industrial-based economy to one featuring recreational and natural resource based amenities.

As highlighted on the very first page of the Marquette Plan (phase I): “In a region that is losing population, losing jobs and losing its identity in the process, we haven’t lost sight of our greatest resource — Lake Michigan. It is our drinking water, our climate, our economy, our scenery … our lifeline.

… the Marquette Plan aims to … change perceptions of the lakefront and the lakefront communities as a destination and a place that attracts new residents and investments.”

To achieve this, the Plan largely focuses on a series of recreation-based actions aimed at creating a large-scale, linked network. (I don’t want to imply that the Plan dismisses the steel industry, especially as its still a major employer; the Plan does call for trying to “find potential synergies that could improve the operational effectiveness and vitality” of the cluster of industries around the Port of Indiana).

As the Plan puts it, “At the heart of this effort is a green ribbon of connected dune and swale landscapes, river corridors, lakes, beaches, reclaimed industrial canals and a range of diverse habitat that provides the natural counterpart to the industrialized brownfield setting that has dominated the past century. … The plan capitalizes on green space linkages, improved infrastructures and resulting community enhancements to lay a framework for reinvestment …”

Among the Plan’s ambitious goals, increasing public shoreline access from the current 57 percent to over 75 percent of the shoreline, and “to provide generous minimum setbacks for new development to ensure this access.”

I spent part of the day with John Swanson, NIRPC’s Executive Director. Swanson is a long-time regional planner, having previously served as deputy director of the Northeast Illinois Planning Commission.

For the past four-and-a-half years he’s been at NIRPC, and a good portion of his time has gone into the Marquette Plan. Phase I of the Plan, as I noted, was adopted in 2005, and Phase II just last year. Interestingly, the Plan was first conceived back in the mid-1980s by then newly elected U.S. Representative Pete Visclosky. Not surprisingly, Visclosky has remained involved in the Marquette Plan’s development.

The challenges facing the regional planners at NIRPC are multiple. To begin with, they’re dealing with 41 municipalities in three counties. Add to that an incredibly diverse population, both economically and ethnically, and an economy still largely based on heavy industry. Note: NIRPC also serves as the region’s transportation planning organization/MPO.

Swanson spoke to me about how the planning process has engaged a very diverse “public,” including groups often “not in the loop,” such as low-income advocates from cities like Gary. The process also involved local elected officials, industry representatives, and members of the Save the Dunes Council, the area’s principal environmental advocacy organization.

The overarching goal, Swanson said, “is to create a unified vision for the entire 46 miles of shoreline.” That also means closely coordinating with the National Park Service, which manages 15,000 acres of federal holdings in the Indiana Dunes National Lakeshore.

At the same time, however, plan implementation priorities are largely determined by the individual jurisdictions. As Swanson explained, “each community was asked to identify a catalytic project.” These projects are very visibly displayed on a large map of the project area, a constant reminder both that the plan aims to satisfy a variety of constituencies, and that implementation of projects is of critical importance.

We visited one of the priority projects, just completed, the 57-acre Portage Lakefront and Riverwalk Park — on a former brownfields site. 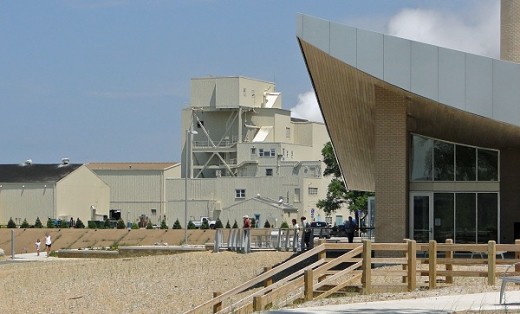 It includes a dramatic new structure (holding classroom/meeting space and refreshment stands) and a 900 foot breakwater/fishing pier jutting out into Lake Michigan.

While at Lakefront Park I met with Olga Velazquez, Portage’s mayor. Portage has a population of just under 40,000 and, as Velazquez put it, “is mainly a blue-collar city, with reasonable housing prices.”

Velazquez, who also serves on the NIRPC Board, grew up in Gary. “The Lake has always been part of my life,” she says. She also fully supports the Marquette Plan’s aim of providing, as she puts it, “opportunities to develop around natural resources.” Velazquez stressed the importance of connecting natural areas along the lakeshore, and looks forward to trails linking Chicago — visible on the horizon — to Portage and beyond.

Velazquez described the special arrangement behind Lakefront Park, with the National Park Service owning the land, but the City managing the facility. Funding for the improvements also came from a novel source; more on this in a moment.

There’s also a walkway built along Burns Waterway, a channel that borders both the huge U.S. Steel Plant (on the east) and Portage Lakefront Park and Riverwalk (on the west). It was quite a sight.

It’s early to say how well the Plan will be implemented. Phase II of the Plan calls for a state-enabled (but not yet operational) Shoreline Development Commission “to continue leading the planning process through implementation and establish a consistent ‘Waterfront District’ for the entire Indiana lakeshore.” Till this happens, NIRPC will take the lead.

I asked Swanson how the Plan and the many projects called for were to be funded. Preparation of the Plan itself was largely funded through NOAA’s Coastal Zone management program, which provided 80% of the funding for Phase I of the planning process, and 50% for Phase II.

Development of projects identified in the Plan benefit from a unique source of funding: revenues from the Indiana Toll Road. About $10 million a year of toll revenues for the next ten years will go to the Northwest Indiana Regional Development Authority (a partner in developing the Marquette Plan), which will help fund the Plan’s priority projects — including the number one priority, the Portage facility I just discussed (it received about $6 million for design and construction of the building, and nearly $3 million for the fishing pier and walkway).

As an aside, the State of Indiana in 2006 entered into a 75 year lease of the 157 mile long Indiana Toll Road with a private Spanish/Australian partnership, receiving a remarkable sum: $3.85 billion. See article on the lease arrangement from Toll Road News.

Many other funding sources are to be drawn on. In fact, Phase II of the Plan lists more than a two dozen federal and state grants programs relevant to the Plan’s recommendations, along with local sources (such as impact fees for open space land acquisition, and community development funds).

Private foundations, as well as steel companies like ArcelorMittal, have also provided financial support for various projects, including the development of a “Greenways and Blueways Plan” that calls for a series of connected waterway trails.

Having a major National Park Service presence is also of tremendous benefit. The Park Service not only provides management and visitor interpretation services, but it brings a “cachet” to the region, something especially beneficial in bringing in visitors who might not otherwise associate industrial northwest Indiana with natural resources and beauty.

To the Northwestern Indiana Regional Planning Commission and others, thinking green is the way to rebuild the region’s economy. As planners know, this is no longer a novel approach. Citizens and local officials are increasingly recognizing that what’s good for the environment most often corresponds to what’s good for the economy.

Sidebar: On the formation of dunes

From Indiana: A Guide to the Hoosier State (1941) one of the books in the outstanding WPA American Guide Series:

“The formation of a dune is a curious process. Sand swept upon the shore by the waters of Lake Michigan is carried inland by the prevailing north and northwest winds. Then a struggle begins between the invading and shifting sand and the hardy vegetation that may spring up and threaten to block its way.

Grasses, vines, shrubs, and small cottonwood trees sink long surface and lateral roots and provide a nucleus around which small cones of sand are formed. In time the cone is increased in size by the wind-driven sand, and slowly a dune is formed … ”

Sidebar: The Village in Burns Harbor

The Village in Burns Harbor, not far from the lakefront, follows new urbanist principles. It has been specially recognized as a green neighborhood by the NAHB. And, yes, there was even construction underway the day I visited — with five houses being built (bringing the total to 70, about 1/4 of the ultimate build out).

Developer Clifford Fleming told me house prices range from about $180,000 to $350,000, attracting many parents with young children as their “first buy-up home,” but also some empty nesters. It’s just an hour’s commute to Chicago from the nearby commuter station. 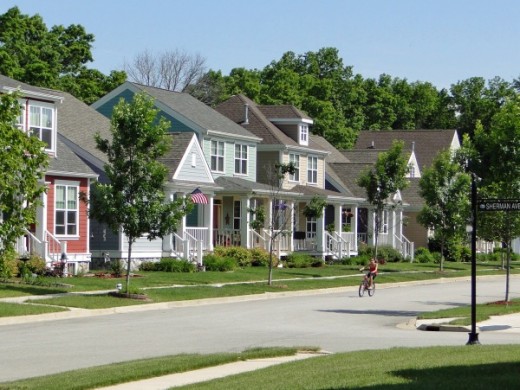 A downtown mixed-use district is planned next to the Village (detailed in the town center/subarea plan available from the web site). Fleming is committed to “the idea of developing a workingman’s town” and “enhancing the image of northwest Indiana,” where he grew up.