Ten years ago Ford reached the decision point on whether to close down its River Rouge assembly complex or make a significant investment in it. In addition, the company faced EPA concerns about stormwater management and runoff from River Rouge.

According to Ford Motor Company President Bill Ford, “I wasn’t about to let the Rouge turn into an industrial relic.” In part, this reflected the significance of the Rouge plant to the Ford family, which takes pride in the Company’s history. 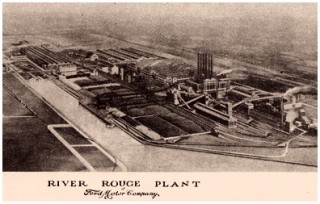 Opened in the 1920s, River Rouge was Ford’s breakthrough manufacturing plant. It was here that Henry Ford incorporated for the first time at such a large scale the principles of vertical integration: raw materials arriving by ship at the facility’s docks; the materials then being manufactured into parts on site; and those parts then being used on the auto assembly line.

At its heyday, the Rouge employed 100,000, providing good paying jobs. After contributing to the War effort in the 1940s, the plant went on to assemble several popular models, including the Mustang and the Thunderbird.

One of the key decisions Bill Ford made was to retain noted environmental architect William McDonough and his firm to turn River Rouge into a “green” auto plant. At the heart of the transformation is the new Ford Assembly building (opened in 2004) and its 454,000 square foot green roof — currently the largest green roof in the world.

Looking out over the roof, you see acres of planted sedum: 10.4 acres to be precise. 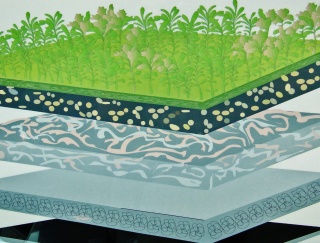 There are more than a dozen varieties of this plant material in use, forming the upper layer of a three inch “sandwich.” Immediately below the sedum is a layer containing a fleece-like material designed to absorb water; and under that a drainage layer, and finally a waterproof membrane. The green roof weighs, when wet, less than 15 pounds/square foot. For more detailed information on the roof (from GreenRoofs.org).

While the roof is the environmental centerpiece of the new River Rouge, there other green features, including:

While they’re manufacturing Ford F-150 trucks inside, above the busy assemby lines is a thin layer of green. River Rouge has made a big start at turning green.