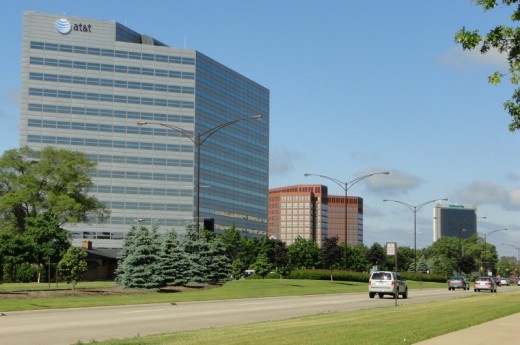 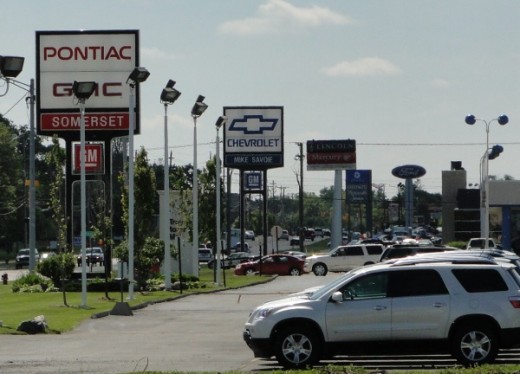 Over the last few decades Troy has thrived, becoming an economic hub in the Metro Detroit region. But, as Planning Director Mark Miller  pointed out to me, the growth curve has flattened. With the sharp decline of the automotive industry in Michigan, Troy has certainly felt the impact. Much of the city’s economic prosperity has been based on automotive-related business, especially small-scale manufacturing and supply operations.

In driving through Troy with Miller and Principal Planner Brent Savidant, we passed building after building with “For Lease” or “For Sale” signs out. Some were large office buildings (including a major complex that served as a headquarters for K-Mart), but even more were modest industrial facilities, “Mom and Pop” type, as Miller noted. Here are some photos I took along one block in a light industrial district. 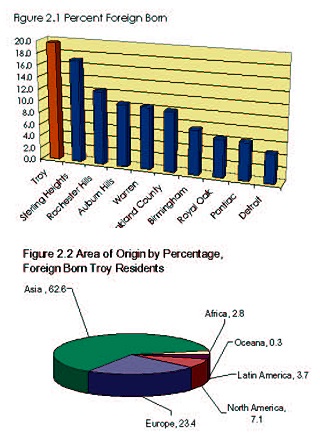 Interestingly, nearly 20 percent of Troy’s population is foreign-born, and of that, a surprising 62 percent are of Asian background. Miller attributed this to the high caliber of the K-12 schools, which has long served as a major draw for this group. Charts from the Troy Master Plan. 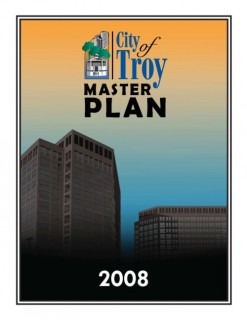 Indeed, the new City of Troy Master Plan 2008 sets out the framework for a major shift in Troy’s direction.

The very first paragraph of the Plan makes this clear: “Fueled by necessity and inspired by a changing population, economy and region, the City of Troy has determined that the development of a new Troy Master Plan is critical to help the community cope with the realities of the 21st century in Michigan.”

As an aside, I found Troy’s Master Plan very well-written and organized. I’d highly recommend browsing through it. To download a pdf of the plan (large file).

In reading through the Master Plan, there’s a certain amount of disconnect between what’s “on the ground” now and what’s called for. Especially striking is the Plan’s emphasis on increased transit and walkability, and on mixed-use development. As Miller told me, in Troy today “everything is designed for the car.” Yet, he noted, one of the priorities residents expressed during input sessions on the Plan was  more places to ride bikes and walk.

The Plan does not call for developing a town center or downtown for Troy (in contrast to what I reported on in suburbs such as Creve Coeur, Missouri). Instead, the focus is on reconfiguring some 21 “nodes” — each with an area of 40,000 square feet or more encompassing a key intersection and adjoining land (there are plenty of major intersections, given the regular rhythm of arterial roadways in Troy). 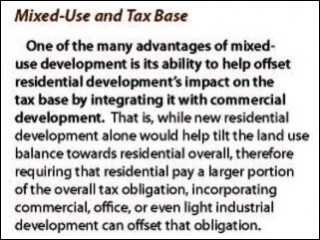 Implementation will involve developing a form-based optional overlay zone for each node, seeking to encourage mixed-use development. Euclidean, hierarchical zoning will fade as developers see the higher economic value from what they can do using the overlay zoning. In fact, Miller doesn’t foresee any major controversy since the optional overlay “will be creating value for the properties.”

Here’s a portion of the philosophy behind nodal development set out in the Master Plan (p. 93):

“Neighborhood Nodes are the concentrated, commercial and mixed-use centers situated at major intersections of Troy thoroughfares that serve as the center of the City’s Economic Neighborhoods. The nodes are specifically identified on pages 95 and 96. Economic Neighborhoods are destinations created as “go to” places that take on a social role, serving both as a place to meet basic needs of the community and as 21st century village centers. … The nodes will typically permit a mix of commercial, office, and high-density residential, although the predominant uses in any Neighborhood Node development must be in keeping with the node characteristics described on pages 95 and 96. … Each of these nodes serves four quadrants of the overlapping social neighborhoods and has the ability to bring residents of four neighborhoods together. …”

Take a look at the map of the nodes at key intersections below; they’re designated by the letters A-U. Tthe numbers indicate the city’s mile square sections. 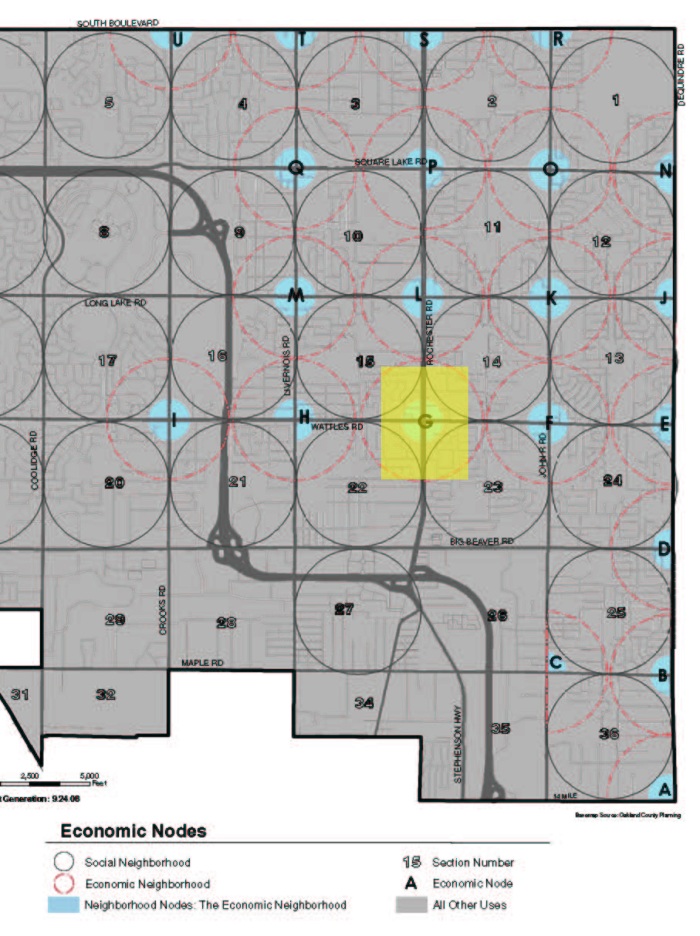 I stopped with Miller and Savidant at one of these nodes (I highlighted the intersection in yellow on the map). The photos below will give you a feel for what it looks like now — click on the panorama to view it at a larger size. 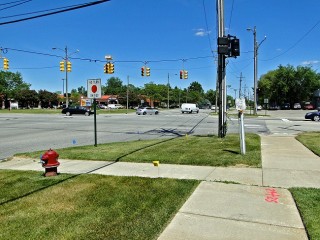 “G. Rochester Road and Wattles Road. A careful blend of commercial uses and office uses, effectively transitioned into the adjoining residential neighborhoods, should be the main uses at this intersection. Recent residential development in the area has taken pedestrian access to the intersection into consideration with effective pathways and sidewalks, and any new development at the intersection must continue this positive trend.”

Obviously, it’s going to be a tall order to change the existing land use pattern. As Miller put it, “it’s going to be a real long-term endeavor.” But over time, he believes that changes will start becoming more evident.

Just as the nodal approach will depend on incremental change, so does improved design and an increased pedestrian orientation. One example that Miller is proud of is a new Starbucks along Big Beaver Road, Troy’s “Main Street” thoroughfare. 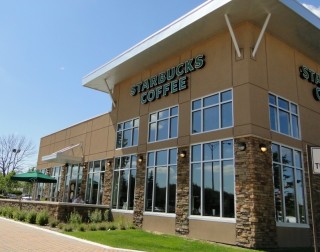 It’s located where a gas station had stood. For the first time, people are actually sitting outside and eating along Big Beaver. The City insisted on the parking being pushed towards the rear, and did not allow for a drive-thru.

Troy is also investing in a new multi-modal center, to be located along an existing rail line (used by Amtrak) on ground near a major “power center” and housing development. it will also encompass the Oakland/Troy airport. 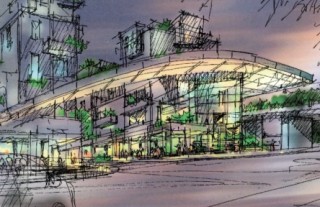 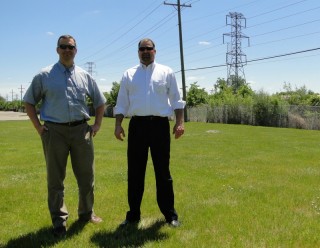 ———————–
I also had the privilege of attending an evening meeting of the Troy Planning Commission while in town. It was well-run by Chairman Robert Schultz, with active participation by all members of the Commission. 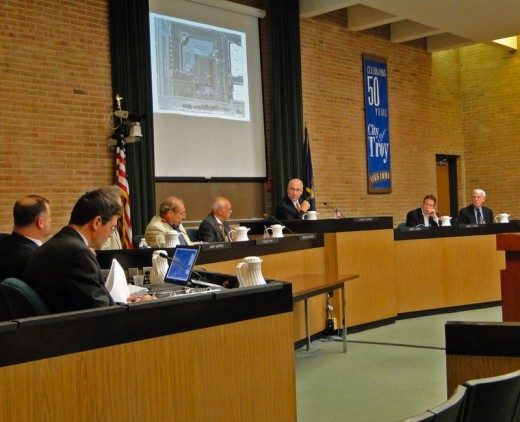 Interestingly, the most controversial item on the agenda was a special permit application for a Sonic drive-thru restaurant — probably one of the few chains not already in Troy! Among the concerns: the potential safety impacts on pedestrians and traffic flow.