Audacious. definition: showing a willingness to take surprisingly bold risks.
Realistic. definition: having or showing a sensible and practical idea of what can be achieved or expected.

Those are some of the goals of Cleveland’s planners, as they seek to steer the city’s land use pattern towards what they term a more sustainable direction. Audacious … or realistic?

In fact, Cleveland Planning Director Bob Brown told me that the City will be demolishing some 2,000 houses this year, a staggering number for a city this size.

Yet at the same time, there are a number of strong neighborhoods. In fact, as Terry Schwarz, AICP, of the Kent State University Cleveland Urban Design Collaborative, noted, many times these neighborhoods are close by distressed areas. That was vividly demonstrated to me as Schwarz drove us from our lunch spot in the vibrant Ohio City commercial district (home to the West Side Farmers Market) to the nearby “Slavic Village” (hard hit by foreclosures) and then on to what’s known locally as “the Forgotten Triangle” neighborhood (see photos above; for more on the Forgotten Triangle see John Kroll’s “Cleveland’s streets are emptying. Should the city accept its shrunken status?” on the Cleveland Plain Dealer blog, August 19, 2007).

Take a look at a typical scene in Slavic Village today (below) and then compare it to a rendering of what part of Slavic Village might look like one day. 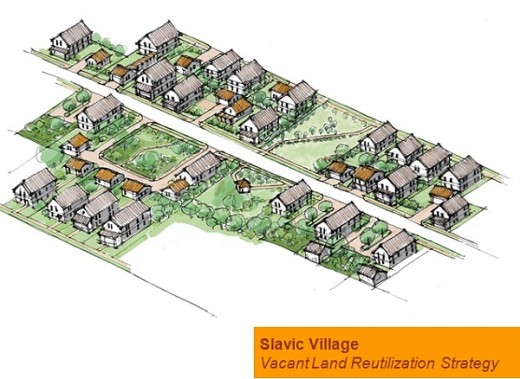 The drawing is from a fascinating report called Re-Imagining A More Sustainable Cleveland: Citywide Strategies for Reuse of Vacant Land (available to download from the Reimagining Cleveland Resources web page), a report initiated by the Cleveland City Planning Commission and Neighborhood Progress, Inc. (a non-profit that works with the city’s community development corporations) as part of a broader planning process.

Schwarz, who worked on Re-Imagining Cleveland, pointed out that in the past “new housing had always been the goal for vacant land.” But the new approach outlined in the report focuses on implementing a variety of “green” initiatives instead.

As Schwarz explains it, there are many advantages in developing hundreds of community gardens, along with larger scale urban farms; planting vacant lots with native turf grasses; establishing green areas for use in retaining and filtering stormwater; and putting in place an interconnected network of recreational paths and trails. 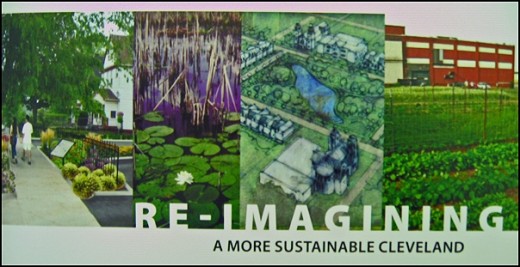 One is the simple fact that the current situation, with thousands of vacant houses and empty lots is corrosive not just to particular neighborhoods, but to the city as a whole. Not only does it foster drug-dealing and other crime, but it’s daily evidence of failure and abandonment that only inspires a feeling of hopelessness.

There are also serious health impacts. As the Re-Imagining Cleveland report notes, “vacant sites with exposed soil contribute to airborne lead levels in the city’s neighborhoods … in many neighborhoods, over 30% of children test positive for lead poisoning each year … this is a public health crisis and a major social and economic challenge.” There is even research being conducted, Schwarz told me, on using spinach and other plants to extract lead from contaminated soil, something that would mesh with expanded urban farming.

The key point, Schwarz says, is that “green space needs to be viewed as more than just vacant land.”

The key point, Schwarz says, is that “green space needs to be viewed as more than just vacant land.” In addition, she offers several practical, financial advantages to the strategy being advocated:

For one, it will allow the city to concentrate its long-term commercial revitalization and housing efforts in fewer areas, rather than spreading them out through a city’s whose population is shrinking. (Planning Director Bob Brown also told me this should lead to infilling at higher densities).

Second, by using already vacant land to serve as an extensive “green” network for treating stormwater (and the City is under EPA requirements to address stormwater-related pollution) the City will avoid having to spend enormous sums on laying down new infrastructure and building new treatment facilities.

Third, less infrastructure in the form of water and sewer lines, and even streets, will need to be maintained and might even be removed. Schwarz acknowledges, however, that this is not on the immediate horizon, and would only be done if it could be shown to actually result in cost savings.

The big challenge lies in implementing this huge change in direction. Schwarz sees using a series of environmental, soil, and other overlay maps to identify areas most suitable for agricultural use, those which might work best for managing stormwater, and those where development makes most sense. This follows the ecological approach Ian McHarg first laid out in 1969 in his ground breaking book Design With Nature — a book most professional planners and quite a few citizen planners will be familiar with.

According to Bob Brown, the City Planning Commission supports the vacant land strategy set out in Re-Imagining Cleveland — in fact, it officially adopted the report. Moreover, zoning amendments are being considered to allow overlay zones in certain areas that would permit the kind of agricultural uses needed for larger-scale farms.

In some ways, the renewed interest in local agricultural harkens back to the earliest roots of city planning in America. I’m referring to colonial Governor James Oglethorpe’s 1733 plan for Savannah. As planning historian Laurence Gerckens observed in a short article on the origins of regional planning (“R is for Regional Planning“), “The plan … provided for Savannah’s urban center to be bounded by small allotment gardens for growing food for family consumption. These gardens were, in turn, rimmed by a network of larger farm plots. Each grouping of ten farms shared a wood lot, providing fuel and game.”

Interestingly, Bob Brown also pointed out that the Cleveland Clinic, the city’s largest employer, has committed to buying a greater proportion of locally grown food.

Bobbi Reichtell, NPI’s Senior Vice President for Programs, told me there’s strong interest in local, and even national, foundations in helping support Cleveland’s approach (the Surdna Foundation, for example, provided funding for the Re-Imagining Cleveland report). One early goal of NPI is to help coordinate efforts to raise $1 million to support up to 100 vacant land projects in various Cleveland neighborhoods.

Reichtell stressed that implementation of the Re-Imagining Cleveland report is much more than “pie in the sky.” As she wrote to me after my visit:

“We have a commitment of $600K towards our goal of $1million for vacant land demonstration projects. $500K of it is coming from the City of Cleveland’s Department of Community Development … Neighborhood Progress, Inc. (NPI), in partnership with the City of Cleveland, a number of environmental non-profits, and Cleveland State University, has also applied for a $300K U.S. EPA CARE grant to pilot phyto-remediation projects around the city to test plant-based strategies to remove toxins like lead and arsenic in soil to enable land reuse.

We have also received a commitment from the U.S. EPA Region 5 for $100-200K of environmental assessment work of vacant brownfields that might be appropriate for phyto- or bio-remediation. And finally, we are partnering with the Trust for Public Land’s Ohio office to make their Ohio Greenprint online data base and GIS mapping tool relevant for urban land reuse.”

Yet in driving through just a small part of Cleveland’s distressed neighborhoods, the scale of vacant lands and boarded up housing is vast. Is what Schwarz, Brown, Reichtell, and others have in mind audacious … or realistic … or perhaps a mix of the two? But the bottom line may be this: is there any better choice?

p.s., Carol Coletta, one of the best interviewers covering city planning issues, recorded a terrific conversation with Terry Schwarz that can be downloaded from her Smart City web site. It’s definitely worth listening to.