“It took some convincing,” says Jim Brozena, but the Corps of Engineers agreed to punch two large “portals” through the massive flood control levee that separates downtown Wilkes-Barre, Pennsylvania from the Susquehanna River. With that agreement, Luzerne County and the City of Wilkes-Barre have moved towards once again integrating the riverfront with downtown. 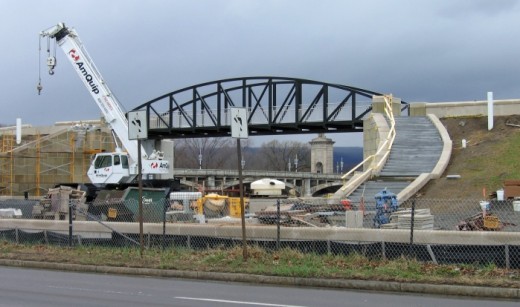 I said “once again,” because before massive flooding in the 1930s and ’40s, a delightful, well-used riverfront park graced the one side of downtown, with stately buildings lining the south side of River Street for about a mile (buildings still standing) between the towering Luzerne County Courthouse and Kings College on the northeast and the Wilkes University campus on the southwest. Then a huge flood control was erected. As Brozena put it, “we had cut ourselves off from the river that gave birth to the city.”

Jim Brozena for many years served as the County engineer. But in his capacity working for the Luzerne County Flood Control Authority, he was uniquely situated to take the lead in a remarkable project, called River Common, that has the potential to provide a huge boost to the economy — and psyche — of this economically battered city of some 41,000. Larry Newman of the Greater Wilkes-Barre Chamber of Business & Industry told me that without Brozena’s passion and creativity, Riverfront Common would never have happened.

Brozena took me for a tour of the project site, and we walked from end to end, dodging downpours on an overcast April morning. But let him tell you part of the story in the following two short videos I took:

The $22 million downtown segment of the flood control project (a piece of a much longer flood control effort) is being financed in equal shares by the federal, state, and local government. 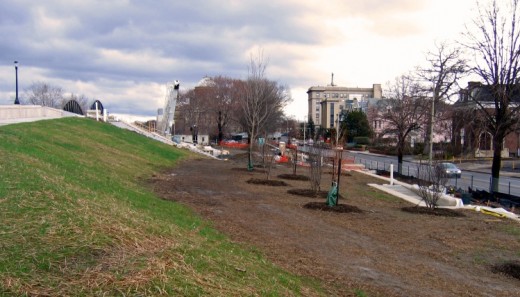 Some of the key components include an amphitheater with seating for 700 (and standing room for many more); boat launch facilities on the opposite side of the river (also part of the project); and new gardens to front the Courthouse.

But most of all, it will be a place for Wilkes-Barre residents and visitors to stroll, sit on the grassy slopes, or enjoy the various events and concerts that will be scheduled for the riverfront.

Also in the works is the narrowing of the four-lane wide River Street, down to two lanes. This is intended to reinforce the pedestrian-oriented nature of the riverfront area. Other parallel streets downtown can easily absorb the traffic shifted from River Street. In fact, as Newman noted, it should help downtown merchants to have more traffic moving through downtown instead of along the river.

Both Brozena and Newman are convinced that the River Common project is critical to Wilkes-Barre’s future — and given the array of local support they’ve garnered for the project, many others share that view.

River Common is expected to generate a substantial amount of spin-off activity downtown.

The large vacant former Sterling Hotel building along River Street (at the main gateway into downtown after crossing the river; you can see it on the left in the above photo) will likely come back to life, while a new museum is planned for the smaller building next to it.

The Chamber also owns the huge, vacant Irem Temple (see photo and rendering), one of the city’s architectural gems. The eastern portal was placed to align with this building, so that when this landmark building is redeveloped it will have direct access to the riverfront.

Wilkes-Barre’s two downtown colleges — Wilkes University and Kings College — have been actively involved in the project plans. In fact, the materials used in the project have been designed to blend in with the campuses color palette.

Newman is also excited by the fact that before long there will be a 13 mile long, 8 foot wide trail along the top of the levee, starting in downtown Wilkes-Barre and connecting to neighboring towns.

The River Common opens this June. Wish I could be there. Best of luck Wilkes-Barre!

River Common park opened to the public on June 19th. See the report in the Wilkes-Barre Times Leader newspaper, “At new park, many children soak up the fun” (June 20).