No, no, I’m not encouraging Red Sox fans to take down Derek Jeter or Alex Rodriguez! What I’m talking about is Tom Buchanan, a member of the Windham Regional Commission, and his encounters with the Entergy Company, owners of the Vermont Yankee nuclear power plant in Vernon, Vermont.

Buchanan is a former photographer for the World Wrestling Federation, who now puts in time maneuvering around the ring of regulatory proceedings involving the relicensing of this aging nuclear facility. He chairs the Windham Regional Commission’s Energy Committee, which is playing a key role in evaluating the merits of the power company’s relicensing application. 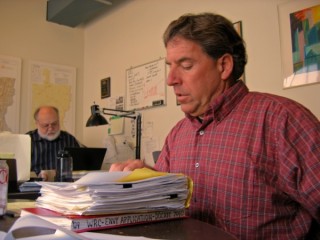 I spoke at some length during a visit on Wednesday morning with both Buchanan (foreground in photo), and Jim Matteau, Executive Director of the Windham Regional Commission (WRC). The WRC is the regional planning body for 27 towns in southeastern Vermont. I wanted to know what the WRC’s role in this very heated debate has been.

The explanation offers some interesting insights into the role regional planners can play when a controversial issue is at stake — and make no mistake about it, Vermont Yankee is controversial. It pits activists concerned about nuclear safety and contamination against others who see nuclear power as a comparatively clean source of energy that also offers much lower energy costs.

A brief tour through the Vermont Yankee nuclear plant in Vernon, Vermont. Uploaded to YouTube by the Brattleboro Reformer newspaper on Mar 26, 2008.

As Buchanan described it, the Energy Committee decided right off the bat not to take a position pro or con on the licensing request, noting that “as soon a you pick one side, you become part of the background noise.” When I asked him what he meant, Buchanan explained that the key to playing a productive role was not to get caught up with which side is right, but instead focus on what questions state regulators needed to get answers on (Entergy’s application is being reviewed by the State of Vermont’s Public Service Board).

The WRC, through its Energy Committee, sponsored two public hearings, and also encouraged all of its commissioners to get feedback from residents in the towns they represented. The Committee also met with representatives of Entergy and took a tour of the plant. As director Matteau (photo on left) points out, over the past year this has meant some “heavy lifting by a group of volunteers.”

At this point, the Energy Committee has identified several key issues with particular relevance to the region to focus on. One is what to do with the plant when it is decommissioned (which will occur either in 2012 when its 40 year license expires, or, if the license is extended, in 2032). This has involved complex issues as to how the site will be “remediated.” As Buchanan stressed to me, the plant sits on 125 acres of prime industrial land, right on the Connecticut River, land that has real regional economic significance. The extent and nature of the cleanup is an area the Regional Commission plans to weigh in on.

The process has consumed a huge amount of time for the 15 volunteer members of the Energy Commission (most of whom serve as commissioners on the WRC), and for WRC executive director Matteau. But when I asked Matteau whether it was worth this level of engagement, his reply was quick and simple: “It would be irresponsible for us not to be involved.”