Continued from Rail Redux – Part 1: the value rail stations hold to communities, and a look at some exciting rail-related development projects in the works.

What Factors Will Drive a True Rail Resurgence?

The National Association of Railroad Passengers (NARP) believes the current Amtrak system is skeletal at best.

What will be needed over the coming decades is an interconnected network of new and more frequent routes and long distance trains with modern equipment, dependable service, attractive stations, and affordable fares to provide mobility options for citizens. NARP reports that: “Experience has shown that when additional frequencies are added to existing routes, revenues rise faster than costs. When new routes are added, ridership on connecting routes also goes up.” 1

NARP’s Grid and Gateway proposal is one model for an expanded national system. 2 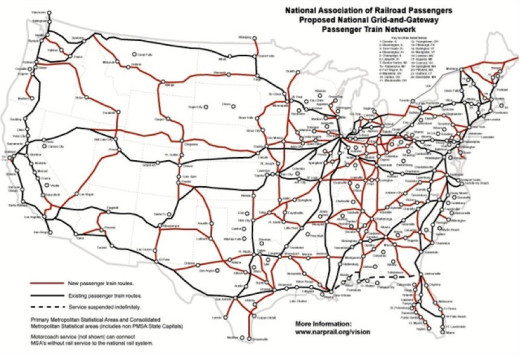 All routes shown would have at least two round trips daily to maximize utility and connection possibilities.

Few airports in the United States coordinate with trains to carry passengers to their destinations. Amtrak accounted for just 3% of all airport access at Newark, 2% at Baltimore, and less than 1% at Burbank. Newark is the only airport with an agreement between Amtrak and an air carrier (United) to let passengers reserve seats on both modes at the same time. 3

But the Miami Intermodal Center (MIC), a $2 billion ground transportation hub may be the game changer in air-rail connectivity.

When complete, MIC — located just east of Miami International Airport — will provide connectivity for air, rail (with a new station for Amtrak and the Tri-Rail commuter service), and bus transit between Palm Beach County, Fort Lauderdale, Miami, and the Florida Keys, making regional travel easier for residents and visitors. 4

Amtrak projects that high speed rail’s huge reductions in travel time, increases in train frequencies, and overall service quality would result in a 44% increase in NEC ridership. Close to three-fourths of the new riders would be those who would otherwise travel by highway (47%) or air (23%), with the balance representing “induced” trips -– that is, travelers making trips they would otherwise not have made by any mode. 7

These rail infrastructure investments in tandem with real estate projects and transit oriented developments could drive a real rail resurgence and downtown revitalization.

According to Adie Tomer of the Brookings Institution’s Metropolitan Policy Program (as quoted in a recent article about All Aboard Florida’s plans) “If it can work [in Florida], it could work in other markets. … This a great test for America.” 8 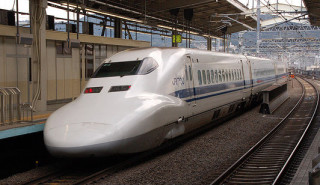 Editor’s Note: perhaps holding even greater potential is the private Texas Central High-Speed Rail project, planned to connect Dallas and Houston — 230 miles apart — with Japanese Shinkansen-style bullet trains, providing 205 mph rail service and 34 daily trains each way … operating by 2021! 9 For those interested, a detailed presentation about the Texas project can be viewed on YouTube.

Three Washington Post writers each took a different mode of travel — train, plane and car — from Washington to downtown Raleigh. The results: The plane was the fastest and the car cheapest, but neither was a pleasant experience. The winner? Amtrak’s Carolinian for its comfort, scenic views, low cost, and pretty good Wi-Fi. The downside? A 5 hour and 47 minute run. 10

Currently, eight trains daily (including the Carolinian) provide service to some 200,000 people annually from Amtrak stations in Raleigh, Durham, and Cary to stops in Greensboro, Charlotte, and 11 other North Carolina cities, as well as Florida and the Northeast. Durham and Cary have recently renovated and expanded their train stations. The Triangle stations are also slated to be part of a potential Southeast Corridor High Speed Rail.

Raleigh is investing in a $73 million, 34,000 square feet intermodal station at the old Dillon supply viaduct building in the downtown warehouse district. The station will function as the hub for Amtrak and the proposed high-speed rail route between Washington, D.C. and Atlanta. It will also serve as a transfer point for commuter rail, light rail, and bus transit — and house retail storefronts and restaurants.

The station is already the impetus for a new mixed-use district with 2.5 million square feet of retail and office space and 6,000 residential units, within a half mile radius of the intermodal center. This landmark project is expected to open in 2017. 11

For a good overview of Raleigh’s Union Station project, take a look at the three minute video above.

The architects’ detailed drawings of the building and platforms show a major transformation from the current brick warehouse design. The renovations will create glass-paneled walls and sunlight through much of the building, while keeping remnants of old steel panels. “We also want to celebrate the rich industrial heritage,” said architect Steve Schuster. 12

Downtown Durham is a mix of the bohemian, foodie, and art & culture scene, a smattering of new and restored residential and commercial real estate all anchored by the Durham Performing Arts and the American Tobacco Warehouse district. The Durham Amtrak station in the restored Walker Warehouse is part of downtown Durham’s homage to its tobacco, textile, and railroad history — and ongoing revitalization.

The Town of Cary’s 6,200-square-foot Amtrak station in the heart of downtown lies within walking distance of the town’s arts center, downtown theater, and planned boutique hotel and urban park.

The station’s role as a catalyst for real estate growth has potential with the development of a four story, multi-family, mixed used development across the street. The project could spark a commercial revitalization of Chatham Street based on residents’ everyday needs -– grocery store, coffee shops, restaurants.

Thanks to federal and state investment in rail infrastructure and local government and private investment in Main Street arts & culture, small business, and real estate, there is every indication that Triangle train stations are well positioned to serve as transit hubs and contribute to the renaissance of their downtowns.