“Polls consistently show that people are concerned about the quality of their drinking water [and the value of protecting drinking water sources] … For 66% of those people, their water comes from a river, lake, stream, or other surface water source. The remaining public water system consumers are drinking water from groundwater source … All the bodies of water we work to clean up and protect are somehow connected to somebody’s drinking water.

This can be a powerful mobilizing factor [for restoring and protecting our source waters].” 1

But the nation’s water bodies still face major challenges. According to the EPA’s National Water Quality Inventory, many of our water sources are “impaired” — 44% of one-half million miles of assessed rivers and streams; 64% of 16 million acres of assessed lakes, reservoirs and ponds; and 30% of 25,000 plus square miles of assessed estuaries. 3

The EPA has further estimated that “the nation’s drinking water utilities need $384.2 billion in infrastructure investments over the next  20 years for thousands of miles of pipe as well as thousands of treatment plants, storage tanks, and other key assets to ensure the public health, security, and economic well-being of our cities, towns, and communities. 4

Yet, the nation’s lawmakers seem less committed to clean water than the American public. Since January 2011, the House of Representatives has voted numerous times to roll-back key provisions of the Clean Water Act. This trend is mirrored in North Carolina where lawmakers are challenging existing water quality laws. In particular, the delay — yet again — of the Jordan Lake Rules. 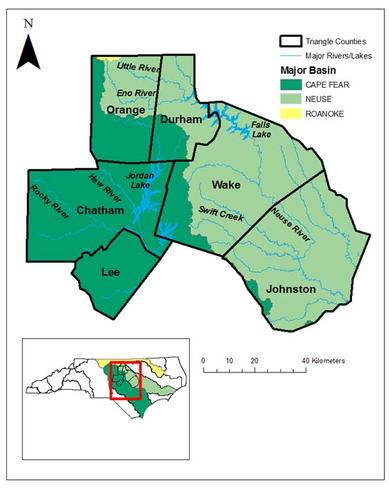 The Triangle’s growing population and development rate are putting a high demand for publicly supplied water and thereby increasing the level of impairment in the region’s rivers, lakes, and river basins.

The sources of pollution are two fold. Point source pollution from factory discharges and sewage treatment plants and non-point source contamination from fertilizers, pesticides, and sedimentation that enter streams, rivers, and groundwater.

The B. Everett Reservoir — Jordan Lake — is part of the Cape Fear Basin in the Triangle. The 13,940 acre lake was formed with the construction of a dam on the Haw River in 1982 to provide flood control, water supply, downstream water quality protection, fish and wildlife conservation, and recreation.

Jordan Lake is a source of drinking water for 300,000 residents and a recreational area for more than a million residents.

Water quality impairment from pollution caused by fertilizers, sediment, and toxins flowing downstream from the lake’s streams and tributaries has always plagued Jordan Lake. The Clean Water Act requires that states reduce nutrient pollutants that cause water quality violations by adopting a “Total Maximum Daily Load” (TMDL) for the pollutants causing the problem. In September 2007, the EPA approved North Carolina’s Jordan Lake Nutrient Management Strategy and the Jordan Lake Rules were signed into law in 2009.

The Jordan Lake Rules mandate reducing pollution from wastewater discharges, stormwater runoff, agriculture, and fertilizer application in both new and existing development in the Jordan Lake watershed’s 38 municipalities in the Triangle and Triad regions.

Although most local governments in the Jordan Lake watershed took action to meet the Rules’ nutrient reduction targets, requests from some local governments have led legislation every year since 2009 to extend the time allowed for upgrading wastewater treatment and revising local stormwater programs. 5

The bill also includes the provision to use $2 million from the Clean Water Management Trust Fund for a study of buoy circulator technology as a way to purify the lake water.

The response to SB 515 from environmental groups and lawmakers has been strong and varied. Some deemed the water treatment solution unfeasible saying it could never work in a reservoir the size of Jordan Lake — or that it should be tested in conjunction with the Jordan Lake Rules, giving the rules a fair chance to reduce pollution before it enters the water bodies.

Others backed the amended bill and the opportunity to study technologies that may clean the lake in a more cost effective and efficient way than installation of runoff-filtering devices as per the Jordan Lake Rules.

However, Stan Meiburg, the EPA’s Acting Administrator for Region 4, has indicated that the delay of the Jordan Lake rules does not relieve the state of its obligation to achieve the pollution reductions called for in the 2007 EPA approved TMDL. He has also indicated that federal law does not allow use of treatment technology as a substitute for actually reducing the pollutants being discharged to Jordan Lake. 7

Reducing nutrient pollution can be a real environmental policy challenge because of the number of different pollution sources and the onus on upstream communities to spend money for water quality improvements that do not directly benefit their citizens.

While Jordan Lake provides drinking water and recreation in the Triangle, much of the pollution flows from the upstream communities in the Triad region. Although these communities have upgraded their treatment plants, rules that would limit housing development (wider steam buffers, stormwater ponds) are perceived as a hindrance to economic development. Thus the delays.

One way to ease the burden of nutrient reduction on upstream communities is to create a cost-sharing plan so downstream communities that benefit from upstream pollution controls can help offset the cost. Exploring innovative financing of pollution controls, rather than delaying the Jordan Lake rules, would have been consistent with the Clean Water Act and less likely to provoke an EPA response with eventually more burdensome federal pollution reduction standards for local governments.

In some parts of the country, engineering measures to solve water quality problems have been supplanted by “good environment to produce good water” approaches.

Closer to home, the Triangle’s “Upper Neuse Clean Water Initiative” 9 partnership conserves the most important tracts of land in order to protect water quality. Forests, wetlands, and open fields allow rain and run-off to filter gradually through the soil reaching streams, rivers, and reservoirs. As of April, 2012, 63 properties that include 63 miles of stream banks on 6,170 acres have been conserved, with another 12 properties having 24 miles of stream banks on 2,210 acres in the works.

These watershed communities have demonstrated that clean water is an absolute value with precedence over all other community development goals.

After all, to quote an oft heard phrase from Mayor Randy Voller of Pittsboro, North Carolina, “No Water, No Town.”

Preston Development has requested the Town of Pittsboro establish a Planned Development District (PDD) by rezoning for 7,120 acres In the Southwest Shore Wilderness, one of the largest remaining unfragmented areas in the six-county Triangle region.

Understanding that ecology is integral to planning and development and that the natural environment is the underpinning of all life and habitats, residents are voicing their concerns. The concerns run the gamut from impacts on water quality and supply, wildlife habitats, social justice, community character, and public input to the planning process.

Residents are requesting a slow down on decision-making on the PDD rezoning and a comprehensive study of the impacts on the socioeconomic and natural environment of both the site and greater Pittsboro.

Residents remain hopeful that the developer’s master plan will result in a first class, 21st century, conservation-oriented development incorporating many of the recommendations made by the Triangle Land Conservancy and the results of the requested comprehensive study.

In my next post, I’ll review the Chatham Park PDD and community input process, and discuss some of the broader implications of the approach being taken.

Related articles we’ve published you might find of interest:

Putting the LID on Your Community’s Stormwater