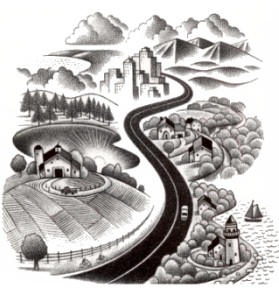 My Corner of North Carolina’s “Triangle” can be found between Chapel Hill, Carrboro, and Pittsboro. It is an open, responsive, and engaged community where you can have lunch with the Mayor, morph your good ideas into a business, and fully participate in public life.

I live in a place that Peter Kageyama in his book For the Love of Cities would call Interesting, Convivial, Comfortable, Safe, Functional — A Place Worth Caring About. What more could a planner ask for?

Cities include Raleigh, Durham, Cary, and Chapel Hill, along with the smaller towns of Apex, Carrboro, Hillsborough, and Pittsboro.

Of course, worth caring about is not the same as everything is coming up roses.  As anyone who is following national news must know, North Carolina is undergoing a sea change, with our Legislature dismantling policies that took generations to build — but more on that later.

What are the priorities for planning in the Triangle?

With a population of 1.5 million people, expected to rise to 2.5 million by 2035, Triangle area planners and elected officials will need to:

• ensure we have roads, sewer lines, and schools to serve our expanding population;
• provide close to work housing and public transit to alleviate traffic congestion, rising fuel costs, and pollution; and
• see that an adequate supply of fresh water is available to meet the diversity of water needs among residential, industrial, and commercial sectors.

I posed the question of planning priorities to John Hodges-Copple, Regional Planning Director of the Triangle J Council of Government. His response: transit and water have bubbled up to be a regional consensus among local governments. Specifically, transit investment and long-term, comprehensive water resources management.

Given the challenges of the Triangle’s changing demographics and transit and water priorities, over the coming months I want to explore with you how planners and others are trying to deal with these changes. Let me give you a quick preview.

Recreation through Conservation in the Haw River Watershed

Tourism in Triangle area towns and counties all reflect some aspect of these attractions: Raleigh is the city of museums; Chapel Hill and Carrboro offer a walkable feast of campus town hang outs; while Chatham and Alamance counties are havens for recreation and rural retreats.

A little known, grassroots example of cultural heritage tourism is taking place in the Haw River Watershed. Local governments and community partners have come together to preserve and protect its unique cultural, historic, and natural resources — and to promote land and water trails, wine tours, and arts and music festivals in revitalized mills towns along the river. And in so doing, “creates new opportunities for tourists to gain an understanding of an unfamiliar place, people or time.” 1

North Carolina lawmakers are challenging existing water quality laws. The delay of the Jordan Lake Rules, yet again, is particularly galling. These rules were passed in 2009 by the North Carolina General Assembly to cut pollution and runoff flowing into the lake from communities in its watershed. In July 2013, the North Carolina General Assembly passed Senate Bill 515, Jordan Lake Water Quality Act, that will delay the Jordan Lake rules for three more years while funding an experimental demonstration to clean the lake by mechanical devices instead of stopping pollution at the source. Governor Pat McCrory signed SB 515 on August 23, 2013

In the meantime, a growing population and reinvigorated housing market will increase lake pollution — more so, if the experimental murky technologies are less than successful. Experts say this technology only works in small bodies of water and could never work in a reservoir the size of Jordan Lake. This experiment will cost the taxpayers almost $1 million.

How will the bill help the millions of Triangle residents who depend on Jordan Lake for clean potable water and recreation? Whose interests are being served in these water wars?

Ecology is integral to planning and development. After all, the natural environment is the underpinning of all life and habitats. Understanding this, Pittsboro residents are voicing concerns over the impacts of a 7,120 acre mixed use development on water quality & supply, wildlife habitats and community character; and requesting a comprehensive study of the impacts on the socioeconomic and natural environment of both the site and greater Pittsboro.

Residents remain hopeful that the developer’s master plan will result in a first class, 21st century, conservation-oriented development incorporating many of the recommendations made by the Triangle Land Conservancy and the results of the comprehensive study.

How will the recently enacted Strategic Mobility Formula law, a new state and federal funding allocation method to relieve traffic congestion, impact transit in the Triangle? Will plans for light-rail and commuter trains be in jeopardy as funds are prioritized toward highways and freight railroad or will it be good for all modes?

What are the future directions for transit in the Triangle?

Raleigh’s new inter-modal train station is primed to provide impetus to transit — as a transfer point between the coming high-speed rail system, commuter rail, light rail, and bus transit — and to downtown revitalization.

Durham and Cary have restored and expanded their train stations and other public historic buildings that have the potential to be catalysts for economic and cultural renaissance in their downtowns.

Can revitalized train stations in the Triangle also serve as transit and retail hubs and spur transit-oriented, mixed-use development in our downtowns?

I look forward to reporting to you about these and other issues in the months ahead. Your comments and questions are always most welcome.