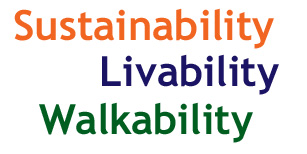 In keeping with the flood of acronyms I heard at the AMPO  conference the past two days, I thought I’d invent one of my own: SLW-ability. It stands for the three words I think I heard most often during the conference — Sustainability; Livability; and Walkability.

What’s more all three of these were frequently tied in to another phrase (alas, not with “ability” at the end of it): economic competitiveness.

There were lots of examples of MPOs making efforts to use transportation strategies to improve the SLW-ability of their region, often with one of the key benefits — and selling points — being enhancing their region’s economic competitiveness.

In fact, Rich Weaver of the American Public Transit Association highlighted APTA’s soon-to-be-published case studies of MPOs from different parts of the country that have focused on SLW-ability.

Among the principal “themes” that emerged from the case studies, said Weaver:

For Misiewicz and others at the conference, improving a region’s livability is closely connected to having better, more frequent transit service. The region’s transit authority last year implemented its first “bus rapid transit” route, between Albany and Schenectady. In its first year of operation, ridership in this corridor increased 25% — and bus travelers enjoyed a 25% reduction in travel time.

One of the challenges Misiewicz pointed to is that increasing frequencies means eliminating service on some routes (since transit agency budgets aren’t increasing). While (almost) everyone would like a bus traveling on their local street, that’s just not feasible. As Misiewicz put it, “we need to explain why we can’t have a bus on your block; and that transit works best where there is density, where people can work, and where parking is managed.”

I just want to make a quick note about her last point, since it’s one I heard several times during the AMPO conference. Local parking policies can have a huge impact on the success (or not) of transit. If free parking is too readily available, especially in core areas, you’re losing one incentive for using transit.

Misiewicz also noted that the Capital District Transit Authority’s transit pass subsidy programs have been very popular, especially with schools and universities — and have helped shift many students and staff from their cars to buses. The CDTA also provides free transit passes (for up to two years) to homeowners in certain areas — namely “urban transit-friendly core areas.”

Strong transit, Misiewicz explained, leads to urban reinvestment and stronger local economies. That was a refrain I heard from quite a few speakers:

Her work at CDM Smith focuses on business location decisions, especially in the manufacturing sector. As she put it:

“Business location decisions are dramatically influenced by transportation. Not enough taxpayers realize the importance of transportation to an area being economically competitive.”

Ziegler also presented some surprising data on the continuing importance of manufacturing. For one, “the U.S. is still world’s largest manufacturer — 21% of all goods by value are manufactured in U.S.” What’s more, Ziegler added, “70% of all our exports are manufactured goods.”

Contrary to popular belief, the exporting of manufactured goods is not just important to large metro areas, but to small and mid-sized ones as well.

Maintaining a strong industrial base also means having skilled, well-paid workers, typically earning between $17 and $34/hour. Obviously, a big plus for the region’s economy.

The nature of manufacturing exports, Ziegler noted, is also frequently based on outdated perceptions. Exports have diversified tremendously. What’s the biggest export, for example, from Tennessee? It’s not cars, and not appliances. It’s surgical and medical equipment. What’s more, the range of export destinations has skyrocketed.

So what’s can planners do? One common-sense suggestion from Ziegler:

“You need to track manufacturers needs in your region — especially what issues might affect them in the future. If you ask them questions, they’ll recognize that you care about them and can be an advocate for them. They will also give you insights into potential vulnerabilities in your region’s transportation system.”