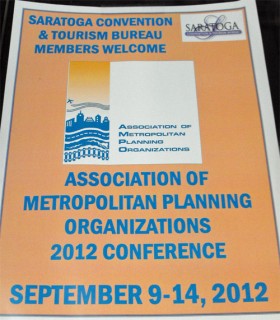 I’m at the annual conference of AMPO, the Association of MPOs. For those of you not in the know, “MPO” stands for Metropolitan Planning Organization — they’re the planning boards that really have some clout, since they prioritize transportation projects for funding within regions. There are planners here from MPOs across the country — from Texas, to Iowa, to Delaware.

I sat in on a session focusing on some of the challenges in promoting transit. Panelists focused on projects in Tulsa, Oklahoma; Atlanta, Georgia; and the capital region of Washington State, including Olympia.

The session actually started precisely on time. As those of you who attend conferences know, that’s not the norm (at least at planning conferences I’ve attended). But panel moderator Rich Weaver of the American Public Transit Association explained: “Because transit is always on time, we’re going to start on time.” Hey, that even got a few laughs!

Some quite interesting projects were described. The Atlanta region, as Tracy Selin (a senior consultant with Cambridge Systematics) explained, has suffered from having a very fragmented regional transit system. There are 13 different transit operators serving the 12 county region. One can imagine the coordination problems. And, yes, there are problems — and the transit riders are the ones who seem to suffer. As Selin noted:

“Some riders have to transfer two or three times to get to their destination. This is big reason for championing a more integrated system.”

The project Selin and her co-presenter Peter Haliburton (also with Cambridge Systematics) discussed is aimed at increasing coordination across these different transit agencies. One key element is implementation of a “transit data warehouse” linking all 13 service providers. It contains both operations and inventory data.

As Haliburton explained, the inventorying of everyone’s existing physical assets has led to the identification of cost-saving opportunities. There are plans now for unified marketing; joint recruitment and training of transit personnel; joint procurement; and coordinated research.

There’s also a public web site where anyone can view ridership and performance data — plus an interactive transit map.

How are land use and transit linked? That was at the heart of a fascinating presentation by Thera Black, a Senior Planner with the Thurston Regional Planning Council in Olympia, Washington. Given the importance of this topic to planning commissioners in many parts of the country, I’ll be speaking more with Black in the coming weeks, and more fully reporting on the approach this regional planning council has taken.

But I did want to at least give an overview now. First of all, it’s a relatively small MPO, serving a population of 175,000. Interestingly — and refreshingly — as Black put it:

That’s right, decide what you want your land use patterns to be, and then work to develop a transit system that supports those policies. This, in turn, will help promote development where you most want it.

Black referred to one pillar of the approach being taken in the region as providing “premier transit service” — that is 15 minute or better frequencies; connectivity between routes; and having many walkable destinations close to major stops.

But despite this progressive approach, Black acknowledged that less than 5% of new residential growth has been occurring along transit corridors. As a result, about three years ago an “Urban Corridors Task Force” was set up to address the question: “how do we achieve the built form that matches the transit service we’re providing?”

The Task Force decided to give priority attention to an 11 mile corridor connecting the region’s three major cities, Olympia, Lacey, and Tumwater. Then within that corridor, identify potential “corridor districts” where efforts to spur development would focus. The aim is to encourage transit-oriented development.

One important part of the Task Force’s work has been, as Black puts it, “to better understand what drives investment decisions, to build what and where.” This has led to meetings with “builders; real estate folks; and financing institution.” Commercial and housing market studies have also been conducted. One of the lessons Black has taken away from the project is that “economics matter … if it doesn’t pencil out it won’t be built.” As she summed up, planners need to “know the market and work with it.”

Local land use policies can also help promote transit use. One that Black cited is how communities deal with the parking standards in their zoning ordinances, saying that: “I can’t over-emphasize the importance of parking standards, and having parking maximums, not minimums.” Coincidentally, that’s one of the very messages I heard three years when I met with local planners right here in Saratoga Springs, New York. See “Downtown Housing -Minus Parking +Plus Commercial.”

How many people do you think use a transit system where the average headway between buses on a route is 60 minutes? If you guessed, “not many,” you’d be right.

In the Tulsa, Oklahoma metro region, home to 780,000 people, transit has been more of an afterthought. As James Wagner, a planner with INCog, the Tulsa MPO, said:

“It’s not been a system people rely on if they have other options … people in Tulsa don’t really know what’s transit can be like.” The result today is that “in Tulsa, transit captives are the complete ridership base. We have very few choice riders.”

(Even if you haven’t heard the terms “transit captives” or “choice riders” before, you can probably safely guess who they refer to).

One of the challenges facing the Tulsa system is that it is dependent on annual city appropriations from the general fund — making long-range planning difficult.

But, as Wagner noted, some of the transit agency’s own choices seem problematic. In particular, he noted that the decision to spread out a wide network of 18 transit lines serving a very broad geographic area comes with a major downside: it reduces the resources which could go into increasing frequencies on more active corridors. This “peanut butter” approach to transit, as Wagner called it, “spreads the agency’s resources out thin.”

One hopeful sign according to Brauer has been the growing number of people saying that “if we’re a great community, we need to have a great transit system.” Wagner and his co-presented Todd Brauer (Vice President and CFO of Whitehouse Group, Inc.) have been working on a project aimed at changing the transit dynamic in Tulsa. Hope to have more on that in a future post, as it’s in auto-dependent areas like Tulsa where the biggest challenges — and biggest opportunities — for transit lie.

To end on an upbeat note, one thing all the panelists concurred on is that there’s a much stronger interest in transit from young people, including those now entering the work force. As Brauer put it:

“Young people want a different life experience. Its’ amazing how many kids between 16 and 20 aren’t getting drivers licenses. As transit providers, we need to know about driving peoples’ travel decisions — especially those of young people.”

Even the Wall Street Journal is touting the benefits of bus rapid transit in a feature article today:

The Commute of the Future: To Get Riders, Buses Try to Be More Like Trains; Skip Red Lights

For more on transit-oriented development, see:

Also related to this posting, see: