We’ve posted responses from both the Outdoor Advertising Association of America and Scenic America to Ed McMahon’s article, “Billboards: The Case for Control.”  I hope you’ll read these, as well as our follow-up conversation with McMahon. I wanted to also offer some of my own perspectives as a resident and business owner in Vermont, a state where billboards have been prohibited since 1968. 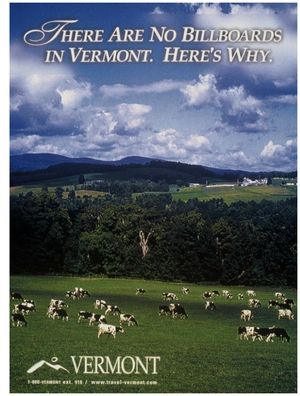 It’s happened quite a few times. I tell folks I’m from Vermont, and before you know it, they say something like “We visited Vermont once. You don’t have any billboards up there … it was really nice to be able to drive and see the countryside without them in the way.”

Vermont (and three other states, Alaska, Hawaii, and Maine) have shown that it’s not hard to get along without billboards. In fact, it’s very, very easy to get used to not having them.

Vermont businesses have not suffered over the past 40+ years as a result of a lack of billboards. In fact, with the state’s scenic beauty enhanced, many have benefitted.

The state’s unobtrusive, but easy to spot, roadside signs clearly indicate where to turn to get to a store or businesses you’re looking for. If anything this makes it easier for people to find businesses. 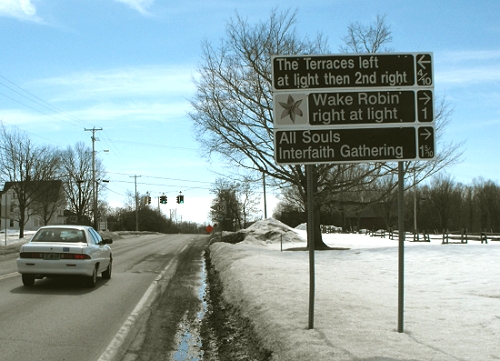 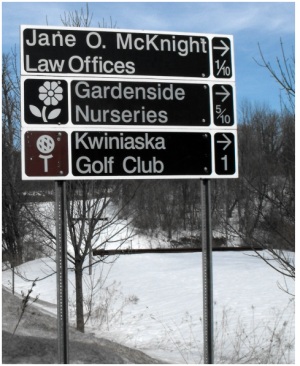 How’s that? First, as a driver you’re not distracted by giant signs towering over fields and countryside. Instead, you can easily spot the distinctive, attractively designed, roadside information signs — and enjoy the real scenery.

Second, our roadside information signs are a big plus for small businesses. No need to spend big bucks to rent space on a billboard — or (more likely) be drowned out by billboards taken by big national chains like Holiday Inns, Bob Evans, or Jim Beam and Seagram’s (and their whiskeys).

It’s rare to hear anyone say they couldn’t find a Vermont business because there was not billboard announcing it. Indeed, as McMahon notes in his article, a former head of the Vermont Chamber of Commerce has said that far from hurting businesses, the removal of billboards “had the opposite effect.”

Controlling billboards is a matter of deciding you want to exercise your right to enjoy a scenic view, to feel more relaxed while driving (or biking, or walking), and to not be subject to a barrage of commercial displays you can’t escape.

What’s more, digital billboards are even more visually intrusive than traditional billboards, with mega-size flashing, changing, and sometimes even rotating images. What does the OAAA have to say about this? Basically, they duck the question, saying that “only a small portion of billboard inventory is digital” — but failing to acknowledge that their number is rapidly growing.

We’re simply under no obligation to subject ourselves to constant visual assault. As McMahon accurately notes, the U.S. Supreme Court has upheld the regulation — and prohibition — of billboards. As the Court said (in Berman v. Parker) “it is within the power of the legislature to determine that the community should be beautiful as well as healthy.”

Planning commissioners have always worked hard to plan for safe, efficient, and beautiful cities and towns. Indeed, as planning historian Laurence C. Gerckens, FAICP, has noted, the origins of city planning in American centered on “realizing an inspiring good order in the public environment while protecting the positive qualities of both the natural environment and cultural heritage.” See Laurence Gerckens, FAICP’s PCJ article, “Community Aesthetics & Planning.”

So what does the case for billboards amount to? Remarkably, it seems (at least from the OAAA’s response) the most important function of billboards, especially the newer digital ones, is to display public service announcements (PSAs).

Of course, I don’t dispute that a billboard can have a PSA. But let’s be real. We all know that any limited public service benefit from billboards is (and will continue to be) far outweighed by the relentless parade of commercial advertisements — many stressing alcohol and/or sex. These are the kind of billboard images we’re all too familiar with, whether we’re 8 years old, 18, or 78.

The OAAA’s argument about the public service value of billboards is like tobacco companies arguing that that one of their primary concerns is public health.

Moreover, as Ed McMahon notes in his article, technological advances with smartphones and other vehicle information systems are now providing motorists with more useful roadside service or traffic information in a much less obtrusive way.

I very much doubt that many besides the OAAA, its members, and a few advertisers will miss the absence of billboards. That’s been the case here in Vermont, where many of us are still a bit shocked each time we leave our state and are reminded of how much foresight our legislators had back in 1968 when they banned billboards [see footnote below].

Yes, back in 1968 some called those Vermonters advocating the prohibition of billboards Communists or Dictators. That’s not an uncommon reaction whenever citizens try to do what’s best for their communities. In fact, that was also a common cry when local zoning ordinances were new in our country.

Do billboard prohibitions interfere with the freedom of some businesses to do what they want? Sure. But, of course, so do any zoning regulations. We all know that zoning tells businesses where in the community they can and cannot locate (want a large warehouse next to your house?), how large their buildings can be, how much parking they need to provide, and so on. Surely these almost universally accepted controls are much more “dictatorial” than just saying no to outdoor billboards.

While I hope you’ll consider what we’ve learned here in Vermont — that banning billboards is good not just for motorists, but for the tourist economy — it’s up to each state and community to decide for itself whether or not it wants to control billboards.

Blake Harrison, author of The View from Vermont: Tourism and the Making of an American Rural Landscape (University of Vermont Press, 2006) notes that: “The [Vermont] billboard law reiterated the importance of protecting scenic beauty for the sake of protecting economic growth.” But Harrison points out another important part of the 1968 law aimed at alleviating the concerns of Vermont businesses, “the creation of a new system of state-sponsored roadside advertising.” As Harrison explains: “Uniform and unobtrusive, these ‘business directional signs’ would provide motorists with the information they needed to find businesses located off the main highway. These signs are still in use today.”