Editor’s note: we received the following reply from the Outdoor Advertising Association of America (OAAA) in response to Ed McMahon’s just-published article, “Billboards: The Case for Control.” We are running this unedited; photos provided by the OAAA.

The Outdoor Advertising Association of America would like to let PCJ readers know about the multitude of new tools available to help citizen planners understand billboard regulation.

Only a small portion of billboard inventory is digital — only 2,400 units in the country, actually. And, the Federal Highway Administration issued guidance on digital billboards to states in 2007.

Although digital technology is new, high-tech billboards have made dramatic gains in energy efficiency. Digital billboard supplier Daktronics says efficiency has increased by 79%, and YESCO reported their digital billboards use one-fourth the power required six years ago. 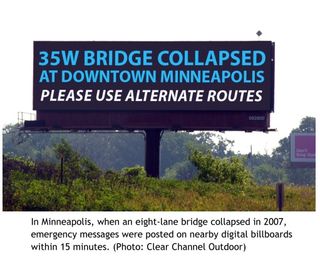 In Hartford, CT, digital billboards are part of the media mix in a federal crackdown on texting while driving. The National Highway Traffic Safety Administration has reported progress. 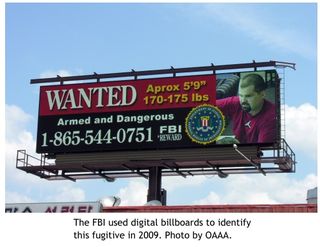 The National Center for Missing & Exploited Children transmits Alerts to digital billboards immediately following a serious child abduction, and the FBI and other law enforcement use billboards on behalf of public safety.

Most billboard ads promote local business, and most of those businesses are “small business.” Advertisers like Bob Evans Farms say loss of billboards means immediate, significant loss of sales.

Tourism advertisers rely on every out of home platform.  For example, Philadelphia has recently used billboards to foster civic pride and promote tourism. Billboards invited the public to click on VisitPhilly.com to submit “love letters” to Philly. The winning message was posted on a billboard along I-95.

The promotion netted 2,711 entries from 42 states, including Alaska and Hawaii. On February 24, 2011, the winning billboard copy was revealed on several online platforms, including a Top Ten countdown video on Facebook. In minutes, comments were posted on Facebook, such as this one from Cortnie Curran: I live in Maine. Can’t wait to come home for a cheesesteak tasty kakes and porkroll!!!

While Vermont bans billboards, its ski resorts and other businesses buy outdoor ads in neighboring states.

Government tourism agencies that sponsor cooperative marketing include billboards as eligible media. Louisiana’s Office of Tourism instructs that coop advertising must be directed toward areas outside a 50-mile radius of the destination, except interstate billboards.

The Journal of Property Tax Assessment & Administration published a treatise on tax valuation of billboard property in the fall of 2010 (Volume 7, Issue 3, pages 61-70). California and Florida dissected the issue and came to the same conclusion — billboards should be assessed on a cost approach to value.

The Supreme Court says commercial speech is protected by the First Amendment. A ruling by the high court in 2001 settled content issues (Lorillard Tobacco Co. et al. v. Reilly, Attorney General of Massachusetts, et al.) The outdoor advertising industry self-regulates via buffer zones around schools, parks, and places of worship. You can find the industry code on the OAAA website.